The Syrian people are still suffering. Here’s how Trump could help.

The Syrian people are still suffering. Here’s how Trump could help. 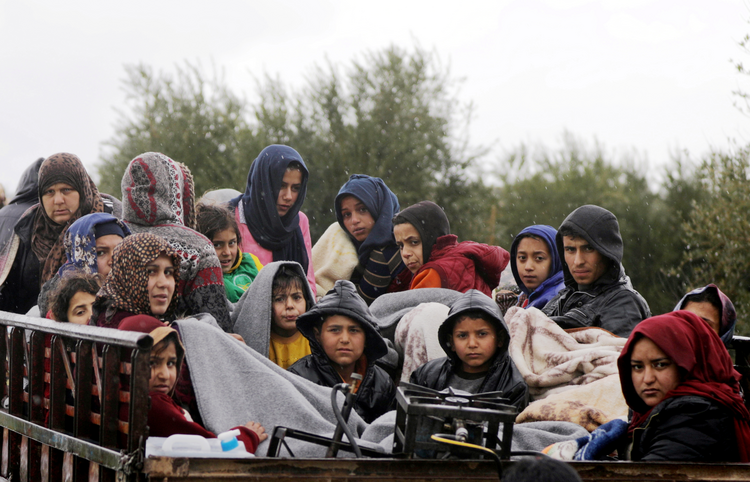 People sit in a truck with their belongings in Afrin, Syria. Jihadists fighting with Turkey are hunting down religious minorities to kill them in Syria's northwest, Christian activists warn, as Turkey and its militant allies have encircled the Kurdish-held town. (CNS photo/Khalil Ashawi, Reuters)

The trauma of innocent children is only the most obvious horror emerging out of the conflict zones around eastern Ghouta and Afrin in Syria. Perhaps the gravest threat is the growing possibility that miscalculation or misadventure will bring U.S. and Russian forces into direct conflict, transforming this regional nightmare into a global calamity. Distracted by its own existential crisis, the Trump administration has adopted a reactive posture. A credible plan either to complete the campaign against ISIS or contribute to ending the civil war in Syria seems beyond its reach.

At the United Nations in March, the U.S. ambassador, Nikki Haley, had strong words for her Syrian and Russian counterparts, but it is impossible to know how seriously to take the paper-rattling in New York as the mortars and missiles continue to fall over Syria.

The Trump administration should reconsider its shortsighted and inhuman restrictions on refugee resettlement, thereby signaling to the Syrian people that they are not completely bereft of hope.

The Trump administration retains some independent capacity to act. It could reconsider its shortsighted and inhuman restrictions on refugee resettlement, thereby signaling to the Syrian people that they are not completely bereft of hope. It could also begin military preparations for a defensible humanitarian relief effort for the thousands of families under siege.

And despite its abject failure to protect Syria’s noncombatants, the United Nations may yet bypass the dysfunction within its Security Council to force some meaningful action toward establishing a cease-fire. These are wan hopes, however, and Syria remains a place with little room for such.

But with the Democrats and the liberal press constantly pushing the Trump as Putin's pawn meme, it is very difficult to have serious discussions with Russia.

Aim you admonitions at the Democratic Party, They are the cause for a poor diplomatic relationship with Russia and an impediment to a speedy non lethal way to solve these issues.

Syria, really???? We ain't got no dog in that fight other than which Obama's red line in the sand created with a half-million dead and 20% of the population in refugee status.

The Catholic Church, however, still has "mageristerium" and "imperium" in Venezuela yet Francis to all outward appearances remains complicit in the suffering of its people with his silence.

1. Who invited the US in Syria? Why is it occupying the oil-rich eastern part of that country? Meddling in Afghanistan, Iraq, Libya, Yemen and Pakistan not enough?

2. Just when one thought the US could not possible have a worse ambassador to the UN than humanitarian/R2P bomber Samantha Power, neocon war-witch Nikki Haley fills the spot. Way to go, Mr. President!

3. Why are the Editors of America Magazine advocating for beginning "military preparations for a defensible humanitarian relief effort"? Please stop giving terrible advice that can lead to WWIII. You want to disarm law-abiding citizens and trash the Second Amendment in the US, while at the same time rescue al-Qaeda organizations in Syria, prolonging the suffering of the Syrian people? Not fair, not charitable. I remember when the Editors of America magazine called on Syrian Christians to turn against Assad at the beginning of the conflict because it was thought his fate was sealed and join the "moderate" opposition. What a mistake that would have been!

Americans who talk of the ongoing "suffering of the Syrian people" as they are being bombed, tortured , starved and displaced by a police state brutal regime, but insist we should neither accept refugees, or stop the holocaust going on there, are complicit with it. This smearing of all who oppose Assad as Alqada is part of this indifference to mass murder of Sunni men, women and children. If Alquada are fighting to stop this horrific regime, then that is no reason to support a regime who is engaged in mass murder of civilians. Labeling all who oppose Assad as "terrorists" denies their inherent dignity as human beings. This is anti Semitic propaganda [against Semitic Sunni Islam, this time]. Americans who will justifiably talk of the dignity of Black Lives Matter, after one innocent person is killed by a police officer, yet believe that for Sunni Syrians, being subject to a government that systematically murders them, as has been going on for years now, is to be supported, defies morality. It is a racist belief; those people should submit to living under tyranny, unlike our people.

Rose-Ellen,
The Syrian Arab Army is composed of multiple faiths and, as the country it has bled and died to protect, is mostly Sunni Muslim. Are they executing "genocide" on their own people? Where are the pogroms of Sunnis in liberated Syria? Any in Aleppo, Deir ez-Zor, Ghouta, etc? Are Sunni Muslims confined to Idlib province, still controlled by Salafists? Can you give examples of attacks by the Assad regime specifically targeting Sunnis? And, while you're at it, please also provide the names of truly moderate rebel groups fighting today.

This article also appeared in print, under the headline “Syria Bereft,” in the April 2, 2018 , issue.