Vatican diplomat to the U.S. recalled amid child pornography investigation 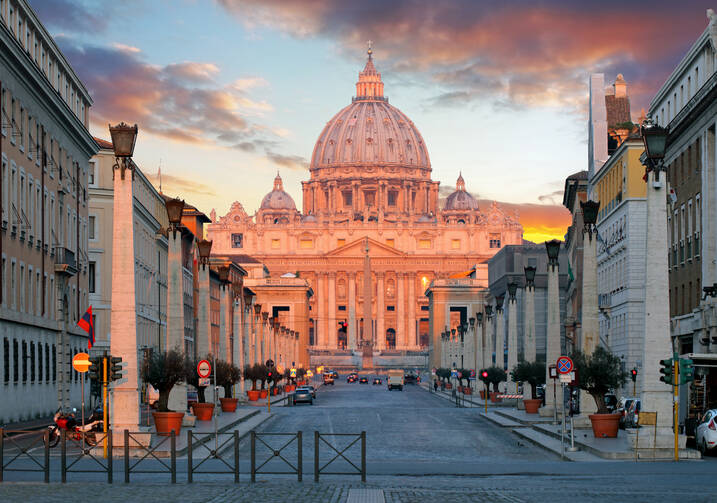 A Vatican priest working in the Holy See's embassy in Washington has been recalled after U.S. officials flagged possible violations of child pornography laws, the Vatican said on Sept. 15.

In a statement issued to the media, the Vatican press office revealed that the U.S. State Department had notified the Vatican on Aug. 21 “of a possible violation of laws relating to child pornography images by a member of the diplomatic corps of the Holy See accredited to Washington.”

The Italian news agency ANSA has named the Vatican diplomat as Monsignor Carlo Alberto Capella, 50, who was sent to the nunciature in Washington less than a year ago. A New York Times story confirmed the report.

The Vatican has not identified the diplomat, but said Friday he was currently in Vatican City and that its promoter of justice, an office equivalent to a prosecutor or investigating judge, has opened an investigation into possible violation of U.S. laws relating to child pornography.

Subsequently, it said, “the Promoter of Justice opened an investigation and has already commenced international collaboration to obtain elements relative to the case.” In other words, the Vatican and the U.S. authorities are collaborating on this case.

The Vatican explained that “the Holy See, following the practice of sovereign states, recalled the priest in question.”

The State Department confirmed that it had asked the Vatican to lift the official's diplomatic immunity. It said that request was denied.

In declining to identify the priest, the Vatican said the case was subject to “investigative confidentiality,” as “applicable to all preliminary inquiries according to the laws of the Vatican City State.”

Responding to the news, the president of the U.S. Conference of Catholic Bishops, Cardinal Daniel N. DiNardo of Galveston-Houston said in a statement released to the media: “This is a serious issue. We hope the Holy See will be forthcoming with more details.

“While we don’t know all the facts, consistent with our Charter, we reaffirm that when such allegations occur, an immediate, thorough, and transparent investigation should begin in cooperation with law enforcement and immediate steps be taken to protect children,” the cardinal said. “The protection of children and young people is our most sacred responsibility.”

Msgr. Capella was born in the Emiglia-Romagna region of northern Italy, and ordained for the archdiocese of Milan in 1993. After taking a degree in Canon Law, he entered the Vatican’s academy for diplomats, and in 2004 entered the Holy See’s diplomatic service.

He was first appointed to India, but in 2007 he was transferred to Hong Kong as a member of the Holy See’s “Study Mission,” which closely monitors the situation of the church in China. He was recalled to the Vatican Secretariat of State in 2011 as desk officer for relations with states, and played a special role in the relations with Italy, before being assigned to the nunciature in Washington.

ANSA reports that Msgr. Capella is living inside the Vatican in the College of the Penitentiaries (Collegio dei Penitenzieri), which is the building that also houses the Vatican tribunal.

The priest-diplomat is being investigated by the promoter of justice of the Vatican City State. This means he is being investigated for alleged crimes under the revised Vatican penal code that was promulgated by Pope Francis on July 11, 2013, and, more specifically, under two articles of that code that relate to child pornography: Articles 10 and 11 of Law N.III: Supplementary norms on criminal law matters.

Article 10 deals with child pornography as such, including recruitment for, production of, inducement and trading in it. For this, the Vatican penal code stipulates imprisonment for 6 to 12 years, plus a substantial fine. The law also punishes the distribution, transmission, importation, exportation or sale of child pornography by any means, including electronically, as well as the dissemination of information directed at grooming minors for sexual purposes. The penalty here includes one to five years in prison, plus a hefty fine. The law also imposes a prison sentence on whoever offers, supplies or exhibits child pornography, even free of charge.

Article 11 deals specifically with the possession of child pornography and imposes a prison sentence of up to two years, plus a fine, for anyone who obtains or intentionally possesses child pornography.

Both articles call for heavier penalties depending on the amount of pornography in question.

Apart from the Vatican City State process, the accused priest, as a cleric, could also be subject to a canonical process conducted by the Congregation for the Doctrine of the Faith relating to “the most serious delicts.” This process was promulgated by Benedict XVI on May 21, 2010, having revised and updated the earlier norms issued by St. John Paul II in 2001, as the motu proprio, known by its Latin title, “Sacramentorum Sanctitatis Tutela.”

Article 6, Sections 1 and 2, of these revised norms deal specifically with pornography. Paragraph 2 of Section 1 considers as “a most serious delict,” or crime, “the acquisition, possession, or distribution by a cleric of pornographic images of minors under the age of fourteen, for purposes of sexual gratification, by whatever means or using whatever technology.” Section 2 declares that a cleric who commits the above mentioned delicts “is to be punished according to the gravity of his crime, not excluding dismissal or deposition.”

In August 2013, the Vatican recalled its nuncio to the Dominican Republic, the Polish Archbishop Jozef Wesolowski, who was accused of paying children for sexual acts. He was investigated and subjected to a judicial process in the Vatican for the abuse of children  and was removed from the clerical ministry. He was also sent to trial for the possession of child pornography but died from natural causes in August 2015, while under house arrest in the Vatican, before the trial could take place.

Like the Polish archbishop, the priest-diplomat now under investigation is also subject to double jurisdiction—in the latter case the jurisdiction of the Vatican City State and the United States. In both cases, the diplomat’s state has priority in terms of jurisdiction.

This story contains reporting from America’s Vatican correspondent, Gerard O’Connell, as well as the Associated Press. It includes updates.

Well....this being caught can be a life changer for him. May God have that mercy on him and bless him with remorse and change...which is not inevitable. Pray for him.
God loved him in the womb and loves him now but the priest must cooperate with that love and flee henceforth this area of temptation....or face the truthfulness of God after death. Salvation is not inevitable.

so, we are talking child pornography=crime punishable by law. diplomatic immunity seems to protect perpetrator
from normal, healthy and just consequences of criminal behavior committed in the country where he is living; and remember, such vices/mental illnesses are not easily cured.

Fr. Geoghan was murdered by a lifer in our prison system. It sounds like this person will face years in jail over there in a safer context. But Rome should admit therefore that ccc 2267's narrative of all prisons being safe from murder ( implicit ) is a euro centric tall tale but they needed it to oppose the death penalty....which actually saves lives in the non euro/ poor majority world if you compare northern Latin America ( non death penalty and highest murder rates in the world) with e.g. China...roughly 1/24 the murder rate of northern Latin America....despite having many poor also.

This is (at least) the second time the Vatican, under Pope Francis, has whisked away to the protection of the Holy See a Vatican official who is under investigation for child abuse and/or child pornography in other countries - the Pope refused to extradite Wesolowski to both Poland and the Dominican Republic. He was not locked up and he was reported to be out and about, dining at restaurants in Rome. Though the Vatican said he was going to have a trial, he was found dead in his room before any trial was ever begun.

What is the Vatican trying to hide by refusing to allow these investigations to proceed in the countries where the crimes were committed?

When will this sexual abuse of children by priests stop! There is NO CURE for pedophelia! None! Zip! Zero! He should be defrocked without haste! And, just for the record, homosexuals do not have a penchant for abusing children. Celibacy does not play are role in sexual abuse. Rather than taking responsibility for their actions, these pedophiles cite them as "reasons" why they abuse. When is our church going to step up to the plate and REALLY, TRULY deal with pedophiles? For shame on them! And, the fact that he returned to Rome where he sought sanctuary and was granted sanctuary is absolutely beyond the pale to me! Shameful...

There is no "sanctuary" involved. The United States does not permit its diplomats, who also have immunity, to be tried in foreign courts. The Vatican wishes to get out from behind the eight-ball and to prosecute pedophiles in such a way as to learn more about what should be the manner of deterring this kind of behavior--in a way that is constructive, rather than politicized. "Conservatives" who are fans of Saint John Paul II should remember that that pontiff felt the same way, and did not act because he felt he could not trust regimes that defame priests in a fashion similar to that employed by communist ones. After Pelosi, Bannon, Sanders, et. al., I think that Pope Francis and his advisers have every reason to doubt the fairness and objectivity of American public officials (and prosecutors ARE "public officials," i.e. budding politicians) in investigating and trying these cases. If you as a Catholic trust the American judicial system more than you trust the Roman Curia and the priests who devote their lives to running the Church at its highest level, I'd like to suggest that you become something other than Catholic, like Rod Dreher has (more about HIM by me, on another thread here at "America")!