As Harvey rages, Catholic Charities ramps up its response 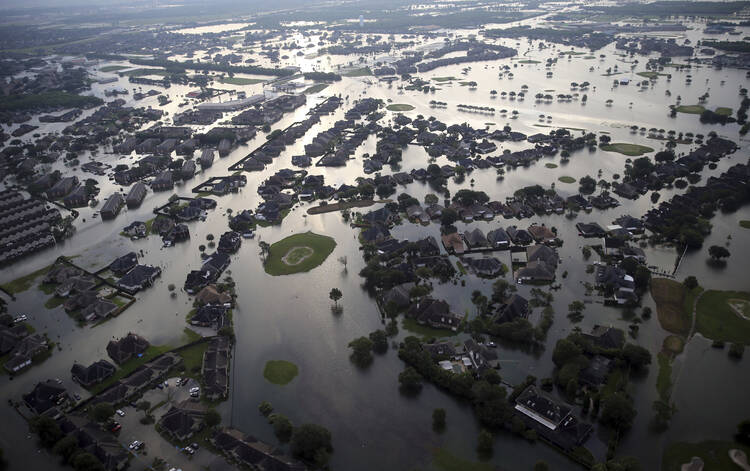 There is essentially no precedent for the work looming ahead for Catholic Charities USA, and certainly other disaster relief agencies, as Hurricane Harvey completes its drenching march through Texas and Louisiana this week. While other storms have claimed more lives—Katrina took more than 1,830 lives; by Sept. 4 Harvey’s toll had risen to at least 50—and other hurricanes have been larger or fiercer, none have produced Harvey’s relentless downpour.

By Aug. 28, with days’ more rain ahead of it, Harvey had already dumped more than 11 trillion gallons of rain on Texas. The National Weather Service reports that 49.2 inches of rain fell on the Houston between Aug. 25 and the morning of Aug. 29—a record for the continental United States. A year’s worth of rain fell across Texas in only a few days. By comparison Katrina produced 17 inches of rain and Superstorm Sandy less than 7 inches.

“I cannot compare it to anything,” Donna Markham, O.P., president of Catholic Charities USA, says of the storm. “The expanse of it…it is bigger than Katrina. The loss of life has not been as great as Katrina, but the damage is just monumental.” She reports that it has taken the entire network of Catholic Charities offices across the country to assist in the response.

“What we’re trying to do right now,” Sister Markham says, “is get emergency supplies and money into the area as quickly as we can.”

“I cannot compare it to anything,” Donna Markham, O.P., president of Catholic Charities USA, says of the storm. “The expanse of it…it is bigger than Katrina. The loss of life has not been as great as Katrina, but the damage is just monumental.”

Catholic Charities staff are in the field even before the storm has subsided. Some of them are themselves Harvey victims, dealing with their own personal trauma as they try to serve their traumatized clients in the Houston and Corpus Christi areas. After being forced to evacuate their own homes, many staff members have not been able to get back yet, Sister Markham says, to find out what they have left in Harvey’s wake. Others, called back from late summer vacations, have yet to see what damage Harvey has done.

Other church-related services in Texas are likewise soldiering on as the storm runs its course. Carol Keehan, D.C., president and chief executive officer of the Catholic Health Association, reports by email that a few C.H.A.-member institutions have had to close because of Harvey’s wrath and that “all are coping now with the immediate issues, sorting out will start in a couple days.”

She adds, “There will be lots of issues to get facilities back in service, etc., also lots of issues with staff who have lost so much and whose lives are also turned upside down.”

While many small Houston clinics were forced to shut their doors, most large C.H.A. member institutions in the city remained open throughout the storm, a spokesperson for Catholic Health Initiative-St. Luke’s, reports. Built on higher ground than other Houston structures, the hospitals became literal islands at the height of Harvey flooding. The facilities remained “nominally accessible” and “saw emergency department volumes increase just after the hurricane’s retreat,” the spokesperson said.

As luck would have it, if that is the right word under these circumstance, just a few days before Hurricane Harvey stormed ashore over Rockport, Texas, the Ford Motor Company had donated a new mobile response center to Catholic Charities USA in Alexandria, Va. On Aug. 31, the truck was on its way south to San Antonio, where it would be deployed for the first time in earnest to help Catholic Charities’ response to Harvey.

Sister Markham will be catching up to that new emergency asset in San Antonio on Labor Day. She will be carrying a $2 million check, representing the Harvey relief donations collected so far, to hand over to local Catholic Charities officials. “Any money that comes to us, we are getting it out there as quickly as is feasible,” Sister Markham says. She expects the donations will be put to fast use buying survival materials—food, clean water, diapers, clothing and blankets—that will help the hurricane’s refugees get through the next few weeks.

Catholic Charities of the Archdiocese of Galveston-Houston was able to open its offices on Aug. 31. Its president and C.E.O., Cynthia N. Colbert, announced the reopening in a statement released on Aug. 30. “Our heart is service,” she said, “and now that clients and staff can reach our building safely, we want to be available to help people move past this and find their new normal.”

"The people Catholic Charities is serving are some of the most vulnerable people in these situations because poor people are effectively the most drastically affected in these events.”

The office asked that clothes not be dropped off at this time but reported that local donations of specific needs, including bottled water, diapers, baby formula, cleaning supplies and toiletries of all sorts, pet food, and gift cards for gas and grocery stores, were welcome.

The next stage of Catholic Charities’ efforts in the region, according to Sister Markham, will focus on assistance with cleanup and assessment of the damage to the homes of the Catholic Charities clients in communities hard hit by Harvey. “The Red Cross goes in at the very beginning,” she says. “We come in with some emergency aid at the beginning too, but then our job really is after the Red Cross moves out, we move in to work with the resettling and assisting people—from helping them clear the muck out of their houses to all kinds of other services.

“And of course the people Catholic Charities is serving are some of the most vulnerable people in these situations because poor people are effectively the most drastically affected in these events.”

Relief and restoration materials from Catholic Charities offices around the country are this week on their way to San Antonio, which will be used as a staging site for moving relief supplies into the Houston and Corpus Christi areas. Following those physical resources will be some human capital—people from Catholic Charities agencies around the country who will be making South Texas a temporary home as they pitch in for relief and restoration efforts.

“I don’t know how many will be sent down at this time,” Sister Markham says. It will be no doubt hard duty under difficult circumstances, but staff trained in emergency response “are used to calling on each other for help and being shifted around as needs dictate,” she says. “They know tomorrow it could be their area of the country. We all need each other and we all need to help.”

Catholic Charities outreach and restoration efforts may include volunteers in the future—local agencies are already coordinating volunteer help—but for now Sister Markham warns folks to stay out of the area. However inspired they may feel to act, this is not the time for individuals to volunteer themselves into the emergency zone.

Some may also be tempted to collect materials and ship them to Texas, but truckloads of supplies are already piling up outside the disaster area because of flooded roads and other hazards. Sister Markham suggests that cash donations that local agencies can put to immediate use without worrying over logistics remain the best option at this early stage in the national response.

Thousands of people who survived Harvey’s deluge have lost their homes to the floods that accompanied and followed it; thousands more have experienced significant damage to their homes. Fortunately that is an area of expertise for Catholic Charities. In the months and years ahead as South Texas begins a complex and costly restoration, “housing is going to be big issue on this,” Sister Markham says, from the quick construction of emergency and temporary shelters to the long-term challenge of rebuilding affordable housing in devastated communities.

How you can help:

To make an online donation for disaster relief wherever it is most needed throughout southeastern Texas and western Louisiana, go to www.catholiccharitiesusa.org and select “Donate Today.”

For donations in support of specific relief efforts in: Corpus Christi, go to www.catholiccharities-cc.org and click on “Emergency Aid.” San Antonio, go to www.ccaosa.org. Select “General Agency” under Donation designation to direct funds to hurricane relief.

Galveston-Houston, go to www.catholiccharities.org. Select “Direct my gift to” and pick “Disaster Recovery” to direct funds to hurricane relief.

Catholic Charities of Southeast Texas is accepting donations online through Network For Good.

The Texas Catholic Conference of Bishops has a list of charities helping with the disaster listed on its website and asks prospective donors to “give like the widow.”

Parishes across the country will be hosting special collections in September Masses for Hurricane Harvey relief efforts.

The American Red Cross is accepting donations on its website. You can also text HARVEY to 90999 to donate $10.

If you live in Texas, the City of Houston Emergency Operations Center has posted a list of places where you can drop off donations.

The Food Bank of Corpus Christi.

Finally, some advice from the Federal Trade Commission on avoiding charity scams that often arise in the wake of natural disasters.

Many thanks for the extensive list of aid routes, with some explanation of where the aid is going. I hope the national USCCB collection will supply figures of where the donations came from and where it is going. There must be transparency.