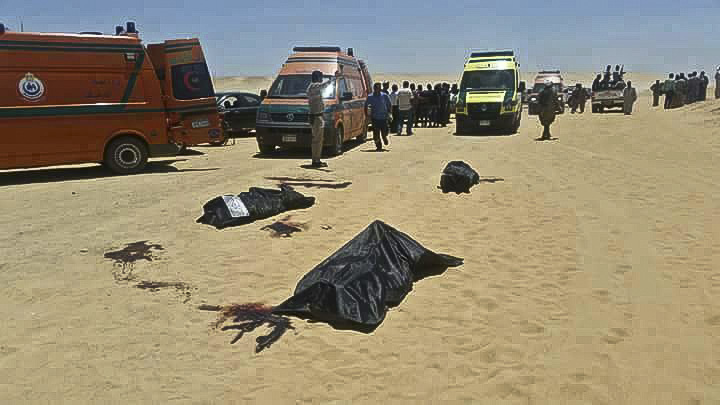 This image released by the Minya governorate media office shows bodies of victims killed when gunmen stormed a bus in Minya, Egypt, Friday, May 26, 2017 (Minya Governorate Media office via AP).

Pope Francis has denounced as “barbaric” the attack by armed gunmen on defenseless Coptic Christians in central Egypt today that killed at least 26 people, including children aged 2 to 4, and wounded 25 others.

He was “deeply saddened” at the news of “the tragic loss of life and injury caused by this senseless act of hatred” and “expresses his heartfelt solidarity with all those affected by this violent outrage” and especially “those children who lost their lives,” the Vatican secretary of state, Cardinal Pietro Parolin, said in a telegram on the pope’s behalf to Egypt’s president, Abdel Fattah el-Sisi.

The pope commends “the souls of the deceased to the mercy of the Almighty” and “assures their grieving families and all who have been injured of his ardent prayers,” the cardinal wrote.

The message concluded saying Pope Francis “pledges his continued intercession for peace and reconciliation throughout the nation.”

Pope Francis “pledges his continued intercession for peace and reconciliation throughout the nation.”

According to media reports some 10 gunmen, dressed in military uniforms, carried out the attack on a convoy that included a car, a bus and a truck carrying Coptic Christians on an unpaved desert road outside Minya, 135 miles south of Cairo, as they were traveling to the monastery of Saint Samuel.

Cardinal Daniel N. DiNardo of Galveston-Houston, president of the U.S. Conference of Catholic Bishops, joined the pope in deploring the attack in a statement released on May 26. "They were children on their way to Mass. They were mothers and fathers taking their children to Mass. And this morning they became targets of yet another horrendous attack on Christians, murdered as they rode to Church together,” the cardinal said.

He added, “Only a few short weeks ago, on Palm Sunday, many Christians were slaughtered simply because they were worshipping God. Now, as we approach Pentecost, the same unspeakable evil emerges again and repeats itself.”

Cardinal DiNardo recalled that during his recent visit to Egypt, Pope Francis, remembering the victims of the Palm Sunday attack, said, “Their innocent blood unites us.”

“Though our grief is unbearable,” the cardinal said, “our unity grows all the more strong. That unity is the way to peace.”

Egypt’s Ministry of the Interior said the attackers, traveling in four-wheel drives, “fired indiscriminately.” Press reports quote Bishop Makarios, the Coptic bishop of Minya, as saying “the terrorists got on the bus and began shooting” and hitting people “with straight shots in the head, neck and body.”

The attack was but the latest in a series on Coptic Christians who count for more than 10 percent of the 90 million residents of this majority-Muslim state. Previous attacks in Egypt left 75 people dead and many more injured. Those attacks took place in December 2016 in Cairo and in northern Sinai this past April, just before Pope Francis’ visit to the country, and led President el-Sisi to declare a three-month state of emergency as the nation fights Islamic State terrorism.

Today’s attack came on the eve of the Muslim holy month of Ramadan. No group has yet claimed responsibility for it.

Pope Francis visited Egypt on April 28 and 29 to express his solidarity with the beleaguered Coptic Christians and to foster Christian-Muslim relations; during that visit he urged the leaders of both religions to engage in a joint response to this terrorist violence and to deny any religious legitimacy for such barbaric, violent acts.

After speaking at the university at Al Azhar in Cairo on April 28, Francis visited the Coptic pope, Tawadros II, and in a deeply emotional ceremony he prayed at the site of last December’s bombing at St. Peter's Church for the Coptic Christians who were killed there.

The Islamic State force in Egypt vowed to increase their attacks against Christians following the pope’s visit. It had been feared that this would happen, and today those fears were confirmed.

The Grand Imam of Al Azhar, Ahmed al-Tayeb, has denounced the killings saying, “Neither Muslim nor Christian approves of the Minya attack, which targets stability in Egypt.” He called on “all Egyptians to unite in the face of this brutal terrorism.”