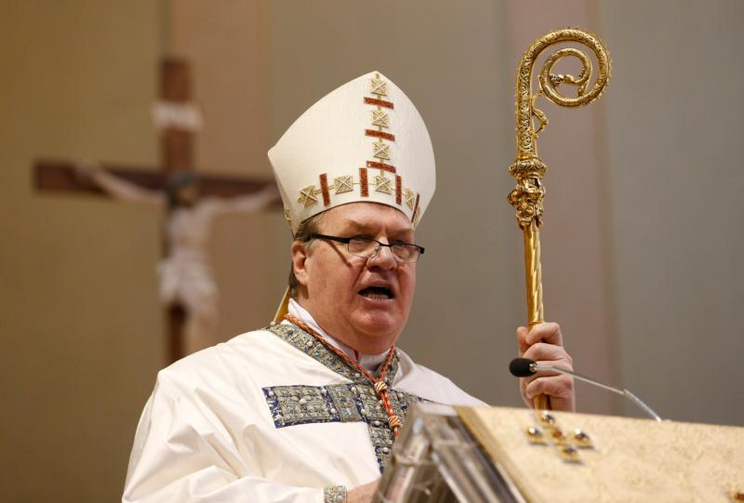 Cardinal Joseph W. Tobin of Newark, N.J., gives the homily during a Mass at which he took possession of his titular church of St. Mary of the Graces in Rome on Jan. 29. (CNS photo/Paul Haring)

A man facing possible deportation has some notable names in his corner ahead of a meeting with federal immigration authorities in New Jersey on Friday.

Several dozen clergy members marched toward a federal building in Newark in support of a man facing possible deportation.

Organizers said the 59-year-old Guerrero came here illegally from Mexico in 1991 and has worked ever since, owns his house and has no criminal record. The grandfather of four applied for a work permit several years ago, but filled out a form incorrectly, they said.

Immigration and Customs Enforcement officials summoned Guerrero last month and told him to plan to surrender his passport on March 10, Guerrero's supporters said this week.

An ICE spokesman said in an email Thursday that Guerrero, "a Mexican national unlawfully present, was ordered removed from the United States in 2009 by an immigration judge. Guerrero remains free from custody and must periodically report to ICE as a condition of his release."

Tobin said lawmakers should focus on fixing immigration laws rather than on large-scale deportation.

The U.S. Conference of Catholic Bishops has issued a steady stream of criticisms of Trump's restrictions on refugees and immigrants. Through Catholic Charities and other programs, American bishops consistently resettle the largest number of refugees annually in the U.S. and provide support nationwide for immigrants.

Other faith groups are mobilizing their congregations to fight Trump's policies, including a network of 37 Protestant and Orthodox denominations that work with the aid group Church World Service. Hundreds of houses of worship around the country have joined the sanctuary movement, which provides support or housing to people facing deportation.

Among others leading protests are U.S. Muslim and Jewish groups, including the Union for Reform Judaism, the largest American synagogue movement.