What Catholics are praying for on Inauguration Day 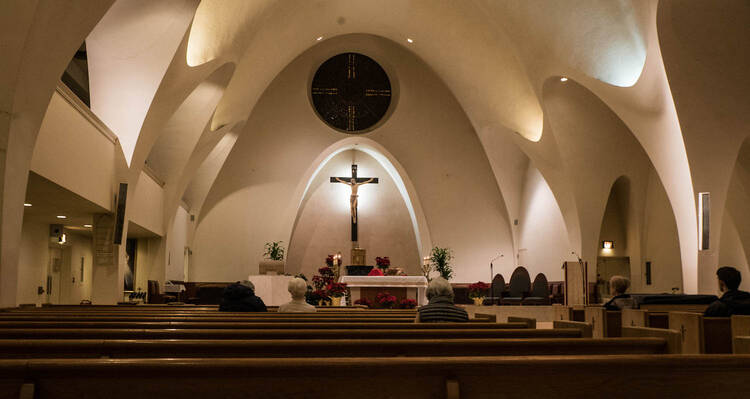 Just blocks from the U.S. Capitol, as the nation prepared for a transition of power and a pivot in political leadership, Washingtonians and visitors alike took a moment to pause in the comfort of something familiar: morning Mass.

Questions remain about how Donald J. Trump will lead the nation after a bitter presidential campaign that split the country, but houses of worship across the city provide a place refuge amid the rancor and uncertainty. A sign near the doors of St. Stephen Martyr Catholic Church reads, “Open for a quiet prayer. All welcome.”

Down the street from the church, armored vehicles and military police in brown fatigues marked the border of the security zone for the inauguration. Inside the chapel, the Rev. Msgr. Paul M. Dudziak led those gathered in a prayer for government leaders on the feast day of St. Sebastian and St. Fabian.

“We stand on the shoulders of those who shed their blood instead of denying Christ,” he said.

John Tomczak, a native of Buffalo, is visiting the capital for his son’s birthday, as well as for the inauguration. “I’m not here for anyone or against anyone,” he said of the day’s events. “I’m more here for unity.”

That kind of unity was difficult to see near the inauguration ceremony. People wearing Trump hats, scarves and buttons passed protestors carrying signs with the next president’s face crossed out. The nation has become too defined by divisiveness, Mr. Tomczak said. The nation’s leaders need to be more reflective, like Jesus was. Quiet contemplation serves a purpose, he said.

“Right now, there’s so much talk, so much aggressive talk,” Mr. Tomczak said. “We talk about peace around the world, but we need peace here.”

Mr. Tomczak’s hope was echoed in the responsorial hymn at St. Stephen. With each statement, the approximately 20 people in the pews responded, “Kindness and truth shall meet.”

Judge and Sally Cornish, longtime D.C. residents, prayed for the country to come together. They come to the 6:30 a.m. service at St. Stephen every Monday, Wednesday and Friday, they said. Today, Ms. Cornish is praying for “peace and love.” There is one solution to the divisiveness of the presidential campaign, she said, pointing up to the crucifix.

Mary Ann Lucey, a St. Stephen parishioner, had particular prayers for the inauguration today. She made a point of making it to the service, despite the early hour.

"I didn't want to get up this morning, but I thought, 'No, I need to,'” she said. “It's a small sacrifice, but it's for our nation. That was my motive to get up and moving. God's will be done. I hope everyone's just kind."

Show Comments (
1
)
Comments are automatically closed two weeks after an article's initial publication. See our comments policy for more.
Lisa Weber
6 years ago
I pray that we survive Trump's efforts to divide us, and that our political process functions. If our political system functions as it is meant to, Trump will be out of the White House in six months.