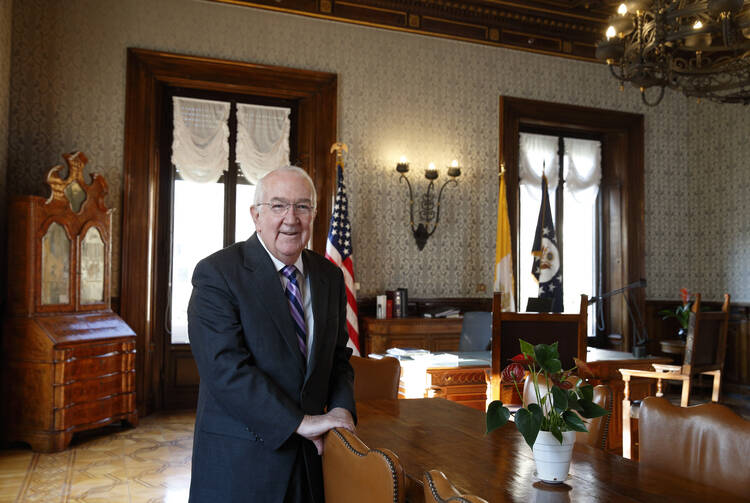 Ken Hackett, U.S. ambassador to the Holy See, is pictured in his office at the embassy in Rome Dec. 15. Hackett's last day as ambassador will be Jan. 20, when U.S. President-elect Donald J. Trump takes office (CNS photo/Paul Haring).

Kenneth Hackett bade farewell to Pope Francis on Jan. 16, after serving for almost three and a half years as the 10th U.S. Ambassador to the Holy See.

In an exclusive interview with America, he reflected on that role, the imminent transfer of power from President Barack Obama to President-elect Donald J. Trump and the continuing policy challenge of immigration—a priority for the pope and the church in the United States.

The upcoming transition, he suggests, may be one of the most significant in U.S. history. On the campaign trail, Mr. Trump spoke about building a wall at the border with Mexico and deporting millions of undocumented migrants, but Mr. Hackett argues, “Campaigning is different to governing.

“I don’t think anybody can imagine sending back all these young kids who were brought by their parents and don’t have papers,” he says. “It’s inconceivable.

“It’s also inconceivable, even though some might like to do it, to have the 20 million people who have been enrolled in health insurance now under the Affordable Care Act lose all that. Are you going to take that away from them? I think Trump’s going to have to find a path through it.”

The immigration question “is a priority for Francis,” Mr. Hackett says, “and it’s a priority for the American bishops now.” He recognized that “some bishops will still see abortion and life issues as the priority,” but “when you have people like [Cardinals SeánO’Malley of Boston, Blase Cupich of Chicago and Joseph Tobin of Newark], together with [Archbishop José Gomez of Los Angeles] as vice-president of the conference, saying how important the migration issue is—and many other bishops too—then they are going to deal with the Trump administration on migration, and they’re already strategizing on that.”

Mr. Hackett, who was for many years C.E.O. of Catholic Relief Services, believes the U.S. Conference of Catholic Bishops “has become a complicated entity in the sense that the bishops don’t want to do battle on everything.” So “if they say anything about settlements on Israel-Palestine question, they know they’re going to get lambasted by the pro-Israel lobbies and they worry about it.

As for the pushback on “Amoris Laetitia” by some U.S. bishops, Mr. Hackett says, “I’m a big mercy guy. I believe everyone’s personal situation is different and must be dealt with on a personal level. You have to deal with people in their real situations. I see mercy, concern and compassion first. But I can understand how many who were very comfortable with their perception, their vision of things, black and white, now feel very uneasy.”

He notes that Pope Francis “is moving from reality. Take the situation as it is and try to deal with it. And I think this is going to have a lasting impact.” He sees this approach too among the the pope’s recent bishop appointments in the United States and his decision to bring the former bishop of Dallas, Tex., Cardinal Kevin Farrell, to the Vatican to lead the Dicastery for Laity, the Family and Life.

Recalling President Obama’s visit with the pope in March 2014, Mr. Hackett says, “I saw there was something magnetic happening in there; they bonded…. Now we know after the fact that Cuba came up and other things too.”

Nine months later the United States and Cuba reached a historic accord. Both sides publicly thanked Pope Francis for his assistance. On this occasion, as in others, “Francis put his charisma and his credibility on the line. We know about the letters [to both presidents]. He wanted to engage; we saw this too on Syria and on the Central African Republic. He’s not fearful about making a mistake. He’s bold. He’s intrepid.”

Pope Francis “puts his credibility on the line not only in the foreign policy field, but also in the pastoral field,” Mr. Hackett adds. He observed this at the Synod on the Family and in the way Pope Francis is combating sexual abuse.

The ambassador played a significant role in the lead up to the pope’s historic visit to the United States in September 2015. Looking back, he admits, “we were worried: Was he going to make a goof in some statement?”

It was “so captivating and moving,” the ambassador recalls. He watched from the gallery and rejoiced. Mr. Hackett says his deputy, Peter Martin, summed up the impact of the visit: “Pope Francis made American Catholics feel good about themselves.”

After observing the pope closely over the last three years, the ambassador said: “I like him. I think he’s courageous. I see wisdom in his actions.

“I truly believe that he is going to leave a legacy that people are not going to be able to turn around. I think he is building a foundation within the church and the way the church acts in the world that is going to be lasting.” He notes that Francis has already created 44 of the 120 cardinal electors that will choose his successor and is likely to create a plurality of the electors by 2021.

“I’m impressed,” the ambassador says. “I think he’s doing great things for the church, and I see the church is now playing a more prominent role in the world. And I believe, in time, bishops in the United States will find again their role in the public place, which receded after the sexual abuse scandal; he’s given that role back to church leadership. He’s given hope to Catholics who maybe have said, ‘I’m not playing in that field anymore, it’s not interesting to me.’ More importantly, he’s given a special energy to ordinary people.”

The Jesuit pope “has become a world player,” he says. “He’s moving things in the right direction. We see in a very tangible way that the Holy See within the last year is significantly more engaged in international public policy than it was in 2015, thanks to his encouragement and leadership. I see the footprint around the world, and I think that’s positive.”

Mr. Hackett mentioned Francis’s decision to send Archbishop Claudio Celli to mediate in Venezuela and the Holy See’s “encouraging presence” in helping Lebanon get a president.

He believes that “Francis’s desire to have a closer relationship with the Orthodox church moved the agenda faster than the foreign policy of the Vatican wanted, as we saw with [Russian Patriarch] Kirill in Cuba, and now I think the balance may have been struck.”

Mr. Hackett has enjoyed “an easy relationship” with the Vatican’s Secretariat of State, and he attributed this to the fact that he has known Archbishop Paul Gallagher, the Secretary for Relations with States, since they first met in the Philippines in the 1990s. “[Archbishop] Gallagher is top notch as a foreign minister,” he said.

He has high praise too for those working in the secretariat. “They are very well trained and work hard. These guys are as good as any of our [U.S.] diplomats.” At the embassy, he said, “We have been regularly engaging with the Secretariat of State at their request on the Congo, Burundi, Southern Sudan, the Central African Republic, and...to the extent we can, we see things happening on China.”

The ambassador says that in June 2015, when Francis published the encyclical “Laudato Si’,” he welcomed it as “directly supporting the [Obama] administration’s policies on climate change and the environment.”

He believes the pope made a “major contribution internationally” with this text. “The timing was perfect,” he said, because it came before the U.N. meeting on climate change in Paris in 2015. Francis’s “leadership was very important as was his choice of Cardinal [Peter] Turkson to articulate it because he is a credible voice.”

Mr. Hackett knows the Vatican considers the invasion of Iraq in 2003 as a disaster, but he is convinced that today there are points of convergence between the United States and the Holy See on the Middle East. He knows, for instance, that the Holy See is happy about the U.S.-brokered accord with Iran.

And on the Israeli-Palestinian front, he said the Obama administration, like the Holy See, wanted a peace deal with a two-state solution. “Secretary [John] Kerry tried so hard to get this; he just kept trying and trying, but it’s not any better now and, in some ways, it’s worse.”

The breakdown now is so severe, he adds, “I don’t know whether the convening power of the pope could bring Israelis and Palestinians together…. The hardliners in Israel seem to be on the ascendancy and the Palestinians, at times, don’t always seem to have their act fully together.”

The ambassador was busy preparing a handoff report for the next ambassador when we met, and when I asked what advice he would give his successor, he said: “It would be [the advice Cardinal Jean-LouisTauran] gave me when I first arrived: ‘God has given you two ears and one mouth, so listen!’”

@gerryorome
Show Comments (
1
)
Comments are automatically closed two weeks after an article's initial publication. See our comments policy for more.
Kevin Murphy
5 years ago
According to the archbishop of San Juan and the New York Times, Pope Francis supported the release of Oscar Lopez Rivera, the convicted terrorist. He actually worked towards his freeing. What a disgrace. For an overview of Mr. Rivera's career see http://www.nydailynews.com/opinion/oscar-lopez-rivera-not-deserve-president-obama-pardon-article-1.2947628. Rivera never even repented of his actions. Keep this in mind while reading puff pieces like the one above. Remember this every time Francis starts preaching about non-violence. I've no respect for this Pope.