Skip to main content
Politics & SocietySigns Of the TimesJanuary 23, 2017 issue 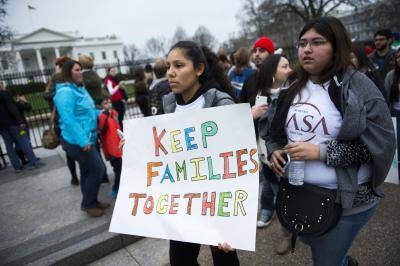 Since the campaign’s end, President-elect Donald J. Trump has softened his tone on immigrant deportations, but his final plans remain unknown. The “Bar Removal of Individuals Who Dream and Grow Our Economy [Bridge] Act,” introduced by Senator Lindsey Graham, Republican of South Carolina, and Senator Richard Durbin, Democrat of Illinois, is intended to shore up the status of undocumented young people regardless of the policies ultimately adopted by the incoming administration.

In a letter to the U.S. Senate on Dec. 22, Bishop Joe Vásquez, chairman of the U.S. Conference of Catholic Bishops’ Committee on Migration, supported the legislation and its goal to shield from deportation hundreds of thousands of young people now living in the United States. The act would also offer employment authorization to young people registered under the Department of Homeland Security’s Deferred Action for Childhood Arrivals program.

Under current law many so-called Dreamers, young adults without documentation who came to the United States as children, are technically subject to deportation to home countries and cultures they may have never known, protected only by the Obama administration executive order that created DACA.

In his letter Bishop Vásquez points out that “there are more than 740,000 young people who have received and benefitted from DACA. They are contributors to our economy, academic standouts in our universities, and leaders in our parishes.”

“As Catholics, we support DACA, as we believe in protecting the dignity of every human being, especially that of our children. These young people entered the U.S. as children and know America as their only home.”

By some estimates as many as one million more Dreamers are eligible for DACA but have not applied for it. Many undocumented young people refrained because they were concerned the DACA database could be used to locate them for deportation after the close of the Obama administration.

The Bridge Act would put DACA recipients into a new type of status, “provisional protected presence,” that would last for three years from enactment. Applicants would be required to pay an application fee and pass a criminal background check and clear security vetting. They would also have to meet a number of eligibility criteria indicating that they came to the United States as minors, grew up in the United States and pursued an education.

Speaking on behalf of the U.S. bishops, Bishop Vásquez, who leads the Diocese of Austin, Tex., vowed in his letter to work with Congress and the new administration “to reform our immigration system in a humane and common-sense manner.”

“While we endorse the Bridge Act and support DACA youth,” he wrote, “we note that DACA and the provisional protected presence status in the measure are temporary substitutes for larger legislative reform of our immigration laws that our country so desperately needs.”

Kevin Clarke is senior editor and chief correspondent at America and the author of Oscar Romero: Love Must Win Out (Liturgical Press).