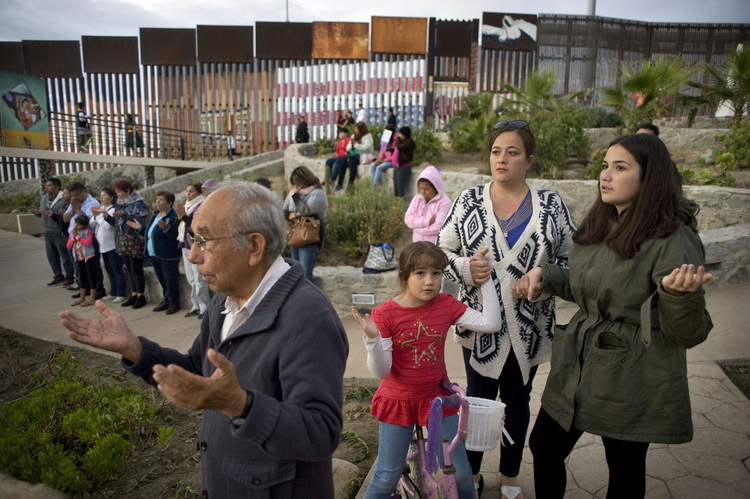 People pray during a Nov. 19 Mass celebrated near the U.S.-Mexico border fence in Tijuana, Mexico.

In an interview with a Spanish-language Catholic television network released on Thursday, Pope Francis told immigrants living in the United States to “go forward with courage, prayer and much tenderness.”

The clip was played during a Mass celebrated by Los Angeles Archbishop JoséH. Gomez at the Jesuit-run Dolores Mission Parish in East Los Angeles, a celebration marking the Catholic Church’s National Migration Week. The full interview will premiere on Jan. 29 on El Sembrador Nueva Evangelizacion.

On a call with reporters following the Mass in Los Angeles, Archbishop Gomez called the video “a beautiful message of hope, and I think that is what we need right now, more hope for the future.”

One of the major immigration issues that may cause heated debate in the coming months is President-elect Donald J. Trump’s proposal to build a wall along the U.S.-Mexico border.

On a call with reporters on Thursday, Cardinal Daniel DiNardo, president of the U.S. Conference of Catholic Bishops, and Bishop Joe S. Vasquez of Austin, Tex., chairman of the bishops’ migration committee, said that the conference has not taken a position on Mr. Trump’s proposal to build a wall.

“At this present time, I don’t believe we’ve taken a stance on this, but we believe that that kind of rhetoric is the place where we’d want to start our conversation regarding immigration,” Bishop Vasquez said.

Cardinal DiNardo echoed the bishop’s comments, saying “As of right now, we haven’t made too much of the wall situation.”

He said the bishops were placing higher priority on preserving other immigration-related rules, such as the 2012 program put in place by President Barack Obama that gives undocumented immigrants brought to the United States as children, commonly called Dreamers, certain rights, including the ability to work legally.

Last February, Pope Francis responded to a journalist’s question about Mr. Trump’s proposed wall by saying, "A person who thinks only about building walls, wherever they may be, and not building bridges, is not Christian. This is not the gospel.”

The Vatican later clarified that the pope was not speaking about Mr. Trump in particular, but about political leaders who propose building literal and figurative border walls.

Cardinal DiNardo said in a statement that the clip is “an excellent reminder of how the universal Church gathers us, no matter our station in life, as one body in Christ.”

He said that should the immigration debate intensify, the nation will have to consider how it treats marginalized populations.

“Ultimately, the question is this: Will our nation treat all migrants and refugees, regardless of their national origin or religion, in a way that respects their inherent dignity as children of God?” Cardinal DiNardo asked.

Conceding that individuals “who seek to do us harm must be kept from our shores,” he said that “those fleeing persecution in need of hope and ready to help us build a better America must be welcomed.”

“Comprehensive immigration reform and a humane refugee policy are equally necessary and possible,” he continued.

RELATED: Catholic Bishops: Remember When You Were Immigrants Too

Earlier this week, Chicago’s Cardinal Blase Cupich penned an op-ed in The Chicago Tribunecalling on Mr. Trump’s administration to keep the program intact.

“To remove D.A.C.A. protections would put hundreds of thousands of young people at risk of deportation, cutting short their dreams of a better future,” Cardinal Cupich wrote.

As a candidate, Mr. Trump promised to repeal all of Mr. Obama’s executive orders, including D.A.C.A.

But his rhetoric on this issue softened in recent weeks, with the president-elect promising a solution that would appease those who support holding people accountable who entered the United States illegally and those who say they should have the chance to lives their lives without the fear of deportation.

On the call, the bishops said representatives from the U.S.C.C.B. are reaching out to Mr. Trump’s transition team to try to arrange meetings in order to articulate the church’s position on immigration.