I am not celebrating Trump’s inauguration. But I won’t be hostile either. 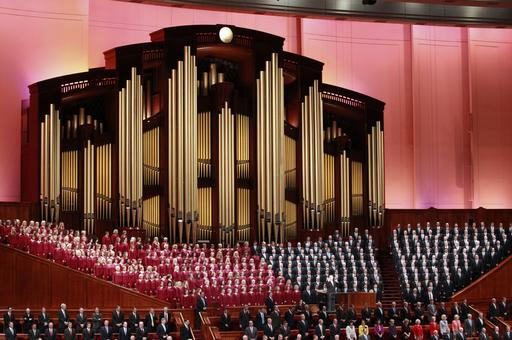 The Mormon Tabernacle Choir of The Church of Jesus Christ of Latter-day Saints, sings in the Conference Center at the morning session of the two-day Mormon church conference in Salt Lake City. (AP Photo/George Frey, File)

Should the historically black Talladega College’s band, The Marching Tornadoes, accept their invitation to play at Donald J. Trump’s inauguration? The small Alabama college was founded to educate ex-slaves after the Civil War and is now affiliated with the socially progressive United Church of Christ. Would marching in the inaugural parade be an endorsement of the president-elect’s controversial agenda?

Passionate arguments, petitions, threats and counter-arguments have broken out among students, alumni and others concerned. After deliberation, the college administration decided to go to Washington, D.C. President Billy Hawkins justified the decision with the telling point that “the inauguration of a new president is not a political event but a civil ceremony celebrating the transfer of power.” That is all well and good. Certainly, the peaceful and legal transfer of political power is a key value for a democracy.

But it is also crucial in a democracy for concerned citizens to assemble, associate and voice their opinions and protests. Over the weekend, our family of adult children had its own spirited political debate. All of us are solid Democrats, all appalled by Mr. Trump’s campaign promises.

How to resist? Should one go on the proposed Women’s March on Washington? What about the full-page ad in The New York Times (Jan. 4) proclaiming in bold print: “NO!...We Refuse to Accept a Fascist America! …Stop the Trump/Pence Regime Before It Starts” and “Don’t Conciliate…Don’t Accommodate… Don’t Collaborate!”

The wording of this ad assumes that the country faces an extraordinary threat to its present and future freedom. No “normalization” should be attempted, and extraordinary resistance is justified. If fascism gains power it can destroy democratic safeguards. Could Mr. Trump’s presidency be this dangerous and dire?

How greatly we need wisdom and prudence at this political moment. I deeply deplore and fear Donald Trump’s stated purposes of denying climate change, expanding nuclear capabilities, resuming torture, reducing health care, and discriminating against and denigrating Muslims, Hispanics, blacks and women—for a start. But as a proven liar and distractible provocateur, will he be able to carry through on his threats? I think the legal structures in place, aided by inertia, may let cooler heads prevail. But I am not sure that anyone at this point can know how things will play out.

I do know what commitments I adhere to. As a Vatican-II, Gospel-guided Christian, I am dedicated to working for social justice and peace through only nonviolent means. I am with Martin Luther King and Dorothy Day, who say we must love our opponents and work for the common good. But what about those millions of Trump voters out there—how do you reach out to them?

We have to be wise as a serpent and innocent as a dove. Choosing nonviolent strategies that will be most effective is important. Creative peaceful resistance can further change: marches, sit-ins, vigils, boycotts, strikes, symbolic actions—along with local, national and international legal actions. Over the years, I have demonstrated against wars and for peace (repeatedly, alas), for climate action, for pro-life causes and against capital punishment. I see this as part of our Christian commitment to God and neighbor. I am no political animal, so I have envied activists their perseverance and energy. But the call to choose how to work for peace and justice cannot be avoided.

On Jan. 20, I would not go to celebrate Donald Trump’s inauguration, but neither would I disrupt the civil ceremony with hostility. For the next four years, I will be ready to protest and work against untruth and injustice. But only with peaceful nonviolence—which excludes crude, rude, aggressive hate speech. My “NO” will be spoken, but so will my encouragement of efforts to conciliate and reason together. As Gandhi well knew, “means are ends in the making.”

Sidney Callahan, Ph.D., is an author, lecturer, college professor and licensed psychologist. Her most recent book is Created for Joy: A Christian View of Suffering.

Show Comments (
20
)
Comments are automatically closed two weeks after an article's initial publication. See our comments policy for more.
JR Cosgrove
4 years 4 months ago
I believe that Ms Callahan has an obligation to learn the truth about what is going on in the Trump transition and plans for future governance instead of issuing a laundry list of what may be faux accusations. What she is describing and what I understand are 180 degrees apart. Such a position exhibits an arrogance of one who thinks they know better than others but in actuality may be mis-informed.

But it is also crucial in a democracy for concerned citizens to assemble, associate and voice their opinions and protests