Here's what to know about all the abortion court cases on the way. 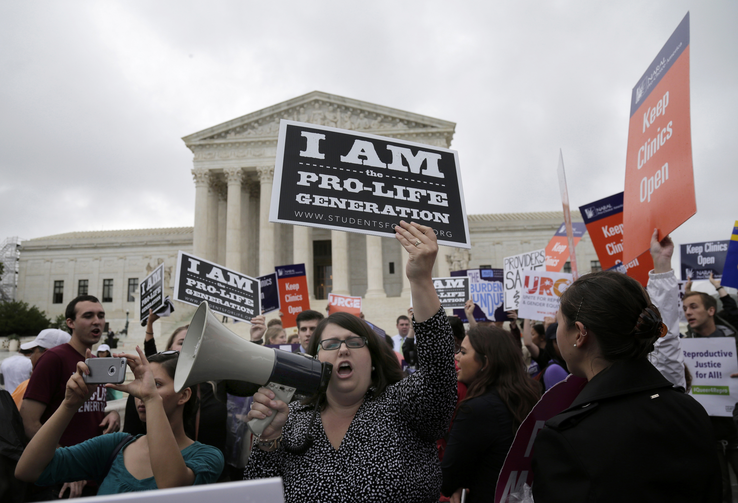 It has been 44 years since the Supreme Court pronounced in Roe v. Wade that women have a constitutional right to abortion and six months since the court reaffirmed that right in Whole Women’s Health v. Hellerstedt, a case that struck down surgical center and hospital admitting-privilege requirements for abortion providers. Current abortion jurisprudence requires balancing competing interests and uses fetal viability as the point at which the scales shift from honoring the decision of a woman seeking an abortion to those of a state seeking to restrict abortions. States are prohibited from placing an “undue burden” on pre-viability abortions, but may prohibit post-viability abortions as long as exceptions are made to protect the life and health of pregnant women.

This test is unlikely to change in the near future, even when a pro-life, anti-abortion ninth justice is seated on the Court, as all five justices who upheld it in Whole Women’s Health remain on the bench. States seeking to limit abortions must carefully craft legislation to avoid certain defeat in the courts. Government action that is found to have violated clearly established constitutional rights can result in monetary damages for plaintiffs and attorney fee awards for their lawyers.

Gov. John R. Kasich of Ohio, for example, recently vetoed an undoubtedly unconstitutional bill that would have prohibited, absent medical emergency, abortions performed when a fetal heartbeat is detected (at approximately six weeks gestational age). He signed another bill, however, that prohibits abortions performed after 20 weeks fetal age, which is determined through ultrasound and is roughly equivalent to 22 weeks gestational age, notwithstanding decisions by the Ninth Circuit Court of Appeals that similar Arizona and Idaho laws are unconstitutional.

The rationale for a 20-week ban is a legislative assertion that “an unborn child of a probable post-fertilization age of twenty weeks or more” is “pain-capable.” The law has a sounder legal basis than the fetal heartbeat law because it could be upheld as protecting a legitimate state interest in avoiding fetal pain and impacts abortions closer to viability (generally recognized at 24 weeks due to a 54.9 percent survival rate with neonatal intensive care).

Nearly 99 percent of abortions take place before 21 weeks gestation, which is why legislatures seeking to preserve the most unborn lives have enacted laws designed to reduce pre-viability abortions. Viability testing, waiting periods and informed consent requirements have been ruled constitutional as long as exceptions are made for the life and health of pregnant women.

The Supreme Court has upheld viability testing at 20 weeks, even though the tests “increase the expense of abortion,” and 24-hour waiting periods. Parental consent laws for minors are constitutional as long as a judicial override is possible and informed consent laws are generally permitted. In 2014, however, the Fourth Circuit struck down a North Carolina law that forced doctors to describe “real-time” fetal development because their compulsory speech provisions were not medically justified.

In contrast, the Ninth Circuit upheld a California law requiring pregnancy-related clinics to post notices regarding the availability of publicly funded abortion services. The court ruled the state’s interest in disseminating that information outweighed the free speech rights of pregnancy crisis centers.

Lower federal courts currently are grappling with a number of other pro-life initiatives, such as fetal burial, fetal discrimination and defunding laws. In June 2016, a federal district court enjoined Indiana’s fetal burial law because the court found no rational basis for requiring abortion providers to treat fetal remains differently from surgically removed human tissue. Another Indiana requirement that banned abortions if based on the race, gender or disability of an unborn child has been enjoined and a trial court’s injunction against Ohio’s defunding of Planned Parenthood is on appeal. The defunding law was declared unconstitutional because, although states are not required to fund abortions, a state may not financially discriminate against an otherwise eligible medical provider solely because it offers abortion services.

Legislative actions and judicial decisions do not occur in a vacuum. The law provides little comfort to those who must make excruciating decisions regarding unintended pregnancies and tragic medical dilemmas. Perhaps the only good news is that U.S. abortion rates are at their lowest level since 1973.

Show Comments (
4
)
Comments are automatically closed two weeks after an article's initial publication. See our comments policy for more.
Vincent Gaglione
4 years 4 months ago
Reading the extensive list of legislative and legal maneuvers to limit abortions is appalling. These are not anti-abortion policies; these are efforts to create further difficulties and obstacles for women who perceive their pregnancies as difficult. They are the devices of people who have failed to convince and convert fellow citizens of their own rationale for opposition to abortions. They are an attempt to undermine a Supreme Court ruling that likely will never be changed. They are, in too many instances, the imposition of their own morality and religious beliefs upon those of different moralities and religious beliefs. The final line of Ms. Boegel’s piece talks about the reduction of abortions in the United States since 1973. If half the energies and efforts of the anti-abortion advocates were spent trying to accomplish an even greater such result , I’d believe that their moral outrage over abortions was sincere. I don’t believe so because they refuse to endorse and advocate for legislation that insures that every mother who refuses abortion is guaranteed a social and economic safety net for the life of the child after birth. The irony of Trump’s election, with the support of so many who are anti-abortion, were his comments in a “60 Minutes” interview when he stated that, were Roe v. Wade were to be overturned in the courts, the issue would devolve to the states. And if a woman lived in a state where abortion was outlawed, she would have to travel to a state where it was legal. That is NOT an anti-abortion policy. That is a hassle-creating policy, which reflects the same long list of legislative and legal maneuvers to which I referred in my opening sentence. Such maneuvers apparently are morally self-satisfying to those trying to impose them. They are, however, mean-spirited and cruel to people who need support. They certainly do not reflect a spirit of mercy.
alex smith
4 years 4 months ago
Does not reflect a spirit of mercy???? and 60 million dead babies somehow does? the poor woman? WHAT about the butchered alive baby? Only at a Jesuit forum I guess.
Lisa Weber
4 years 4 months ago
Thank you for a thoughtful commentary on the difference between trying to limit abortion by creating obstacles and trying to limit abortion by helping women to see a life of hope for their child.
Michael Barberi
4 years 4 months ago
Abortion in the U.S. is a moral and Constitutional issue. Roe v. Wade was largely based on women's rights, not on whether life begins at fertilization and when this 'life' becomes a person with rights. We may not know for certain if Roe v. Wade will be overturned in the near future or whether the SCOTUS will consider the argument about when life and personhood begins. However, given the uncertainly about these complex issues in our pluralistic society, the Federal Government should pass a law providing economic aide for those women contemplating abortion directed at paying the expense of pregnancy counseling, medical and hospital delivery, adoption services, and post-delivery counseling. This would provide a much needed option for women who think the only way out of their problems is to seek an abortion.