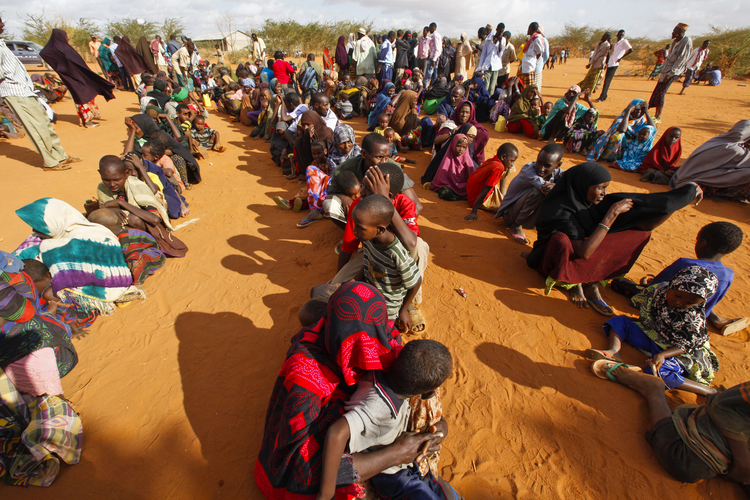 Refugees who fled the famine in Somalia wait in a reception area in 2011 at a camp in Dadaab, Kenya. Kenya's Catholic bishops urged their government to reverse its decision to repatriate all refugees in the country and close all the refugee camps. (CNS photo/Dai Kurokawa, EPA)

A disturbed Somali teenager who had come to the United States with his mother and six siblings in 2014 went on a rampage at The Ohio State University on Nov. 28. He was quickly gunned down by police but not before he used his car and a knife to injure 11 people. The incident is sure to encourage more calls for restrictions on refugees and attacks on faith groups that facilitate resettlement or advocate on behalf of refugees. But that short-sighted response, fixed on absolute security and suspicious of members of the Muslim community, will only exacerbate tensions that can lead to acts of extremism.

Since the end of World War II, U.S. policy on refugee admission has adapted to the changing needs and crises of the times. Today’s humanitarian crises in the Middle East should be similarly addressed with a generous, judicious resettlement policy, especially since so much of the disorder in the region has been the result of reckless U.S. geopolitical decisions. No civilized society can remain indifferent to the clear suffering of so many at this time, but no program can be foolproof. The risk will always remain that an extremist actor may infiltrate the resettlement system.

The Editors
Show Comments (
2
)
Comments are automatically closed two weeks after an article's initial publication. See our comments policy for more.
Leonard Villa
4 years 7 months ago
No civilized society can ignore a threat to that civilization from an enemy with no compunction about its goal to destroy that civilization through any means possible including using people in genuine need to further their caliphate/destruction of Christianity goals. The communists were and are masters at this tactic. The mistake the West consistently makes is to project its good will onto the enemy thinking that this will convert them. They will see we mean them no harm. Also what is the Muslim community doing to negate or counter this brand of Islam and what percentage of the community agrees with it? Lenin used to call Western liberals and good-will projectors "useful idiots" who would be eliminated in the Revolution. ISIS and its ilk are just as determined. They must be defeated and the West need consider both refugees and refugee smoke-screens. Not an easy task.
Mike Evans
4 years 7 months ago
My wife and I just returned from a 21 day trip to a variety of Arab and Muslim countries. The contrast between grinding poverty and luxurious living could not be more apparent. In my own small town the topic of homelessness keeps getting pushed off the table and in larger more prosperous coastal cities, the homeless population continues to grow larger and larger. Yet the so-called civilized world still blames the victim for their own misfortune and refuses to lend a hand or lift a finger lest these unfortunates should get used to "being coddled" or "living in leisure." Our hearts remain unmoved by the obvious results of degrading poverty, disabilities, mental illness or substance abuse. When we meet the Lord at judgment time, we will indeed be surprised to learn that "as often as we neglected one of these, the least of our brothers and sisters, we neglected Jesus himself." How will we plead?