“I can’t call my parents after Trump’s win. At least not yet.” 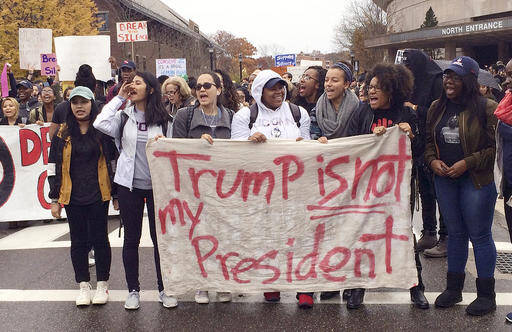 People protest on the University of Connecticut campus against the election of Republican Donald Trump as President Wednesday, Nov. 9, 2016, in Storrs, Conn. (AP Photo/Pat Eaton-Robb)

I can’t call my parents. At least not today.

I love my two parents more than any other people in this world. I know they have given me everything. They gave me life. They instilled in me a belief that I can do whatever I put my mind to. They provided me with an expensive college education. They take care of me whenever I am sick or in need of a home-cooked meal. Most important, they have always graced me with their abundant and unconditional love.

As a child, my dad was my little league baseball coach for seven consecutive years. As I grew older, I slowly realized that my dad did not enjoy the game of baseball—that he coached my team simply to spend more time with me. Most of my mom’s text messages end with “love you so much,” or, “I adore you, baby.” When I moved away to college, my mom always told me no matter what happened, that I could always live with her at home if my college plans didn’t work out.

How are Catholics reacting to Donald Trump’s unexpected win?
The Editors

Maybe this is naive, but I’ve tended to base my political views more on a candidate's fundamental character than the nature of his or her policies. This year election didn’t present an easy decision for me, but in a deep place in my heart I knew I couldn’t put my support behind Donald Trump. Not the man who seemed to embody hate, fear and anger.

My parents had an easier time casting their votes. My family is from a well-to-do part of the country, and Fox News is often on the television at home. My dad, a businessman, looks up to Mr. Trump. He says he has learned most of what he knows as a salesman through his book, The Art of the Deal. My mom, too, is a Trump supporter. She is perhaps an even more vocal supporter than my dad.

I had always assumed I would adopt the political beliefs of my parents. That is, until this year’s election. After four years in college, I didn’t realize how much we had grown apart in our political beliefs. Maybe it is because I don’t talk about it much. Recently, I found myself either excusing myself from the dinner table or quickly changing the subject when my parents brought up the election. They probably even believe, like them, that I support Mr. Trump.

This conflict hit its peak on election night, when the text messages in my family group chat started coming in around 9 p.m.

My only reply: “This is crazy.”

Mom: “If you didn’t believe in miracles before… you have to now!”

Dad: “How great! My children are very lucky.”

Maybe I should feel lucky. As a white male from a upper-middle class family, the election of Donald Trump probably bodes well for my socio-economic future. My dad will likely pay less property taxes. I might even be able to get a job more easily.

Yet on Tuesday, when the result of this election finally sunk in, I teetered on the edge of an emotional meltdown.

This week I have witnessed an inordinate amount of people hurting because of Donald Trump’s election—and hurting badly. Hundreds of my friends posted Facebook statuses in saddened disbelief. Cries of outrage, “F--- Trump,” echoed down West 56th street, where I work and where he lives. I have hugged people in tears and used humor to cope with the feeling of numbness. During my lunch break, I walked over to the Trump Tower on Fifth Avenue where I saw several protesters holding signs reading ““Trump will never be my president.” Men in red “Make America Great Again” caps barked at and even spit on these people.

In the long term, my family may benefit from a Trump presidency. But now, it seems to me, most others will not. L.G.B.T. people, immigrants, refugees, and many of us who desperately want what is for best this country are suffering immensely right now.

This week I have witnessed an inordinate amount of people hurting because of Donald Trump’s election—and hurting badly.

Who I am to go against my parents? Perhaps I should have told them what I most deeply feel. It probably wouldn’t have made a difference, but maybe it could have.

I now feel hate, fear and anger toward my parents—the same fuel that elected Donald Trump into presidency. But maybe, in the end, it doesn’t have to be that way.

I hope to convert my hate to love, my fear to peace, my anger to justice. I hope in the near future that I will be able to call my parents and honestly tell them what I believe. I hope, most importantly, that we can all be hopeful, knowing this is not yet how the story ends.

Nick Genovese is an O'Hare Fellow at America.
More: US Politics