How are Catholics reacting to Donald Trump’s unexpected win? 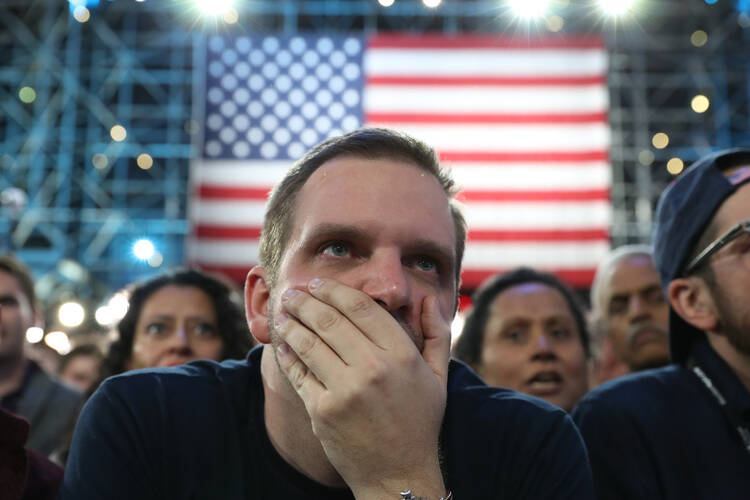 In the early hours of Wednesday, Nov. 9, Donald J. Trump was elected the 45th president of the United States. Despite polls throughout the campaign showing Catholics breaking for his opponent, Hillary Clinton, come election night, a majority of Catholics—52 percent—voted for Mr. Trump. Here's a round-up of some Catholic reactions to the Republican candidate's upset victory.

Looking at the Election

Trump and the Populist Moment, by Kevin Stuart
“The alt-right has cast a pall over Mr. Trump’s victory, and it is tempting to dismiss his entire coalition as rotten to the core with racism, sexism and nativism,” writes Kevin Stuart. “But that would be a mistake.”
God Uses the Imperfect or, Why I Voted for Donald Trump, by Marla Brown
"While I cannot confirm the depth of the president-elect’s Christian beliefs," writes Ms. Borwn, "I know he represents a pro-life platform."
Hillary Clinton's Legacy, by Margot Patterson
Facing a far less experienced, qualified or deserving candidate Hillary Clinton lost, writes Margot Patterson. Why? "The election results say more about the enduring presence of sexism in our society than about policies or even populism."
How Donald Trump Didn’t Lose, by Joseph J. Dunn
A frequent commentator on business and society looks for the origins of this electoral surprise. Maybe President Obama’s comment about “clinging to their guns and Bibles” was the beginning.
A House Divided by Politics, by Nick Genovese
O'Hare Fellow Nick Genovese describes how politics can divide a family. "I can’t call my parents. At least not today."
Onward Christian Soldier, by Joe Hoover, S.J.
America's poetry editor reflects on the sense of loss felt by many social justice activists in light of Donald Trump's election. "We who “combat injustice!” rarely sift through our own stances and actions and ask where have we failed."

Pro Unity and Pro Voice, by James Martin, S.J.
How does a Catholic move ahead after the election of Donald J. Trump as president?
Your Election, by Jim McDermott
We have made this mess of an election. It's ours. What are we going to do about it?
Praying for an Imperfect President, by C. C. Pecknold
A self-described conservative professor at the Catholic Unversity of America has some advice for liberals horrified by the election results. "I encourage everyone to set aside thinking that the millions of Trump voters who voted for Mr. Obama twice are racist xenophobes."

How Students of Color Found the “Fire of Love” in the Face of a Trump Presidency, by Cecilia González-Andrieu
Students at Loyola Marymount University gather and ask: How did we get here? What are the implications of a Trump presidency personally for you and yours? And finally, where do we go from here?
Solidarity Now, by The Editors
America's editorial board argues for the importance of unity in such a politically divided climate. "The geographic, socioeconomic and communication bubbles that too often pass for civic life in modern America have not provided that solidarity and indeed have often worked against it."
Uniting These States? by Judith Valente
Despite the political polarization the election results suggest, there are 10 core values that most Americans agree on.
Cardinal-designate Cupich: Time to Cross Great Divides in U.S. Life and Church, by Gerard O'Connell
In an exclusive interview with America, Cardinal-designate Blase Cupich shared his hopes about what the new Trump administration and incoming Republican Congress can do about the nation’s deep divide following one of the most contentious elections in U.S. history.
This Election Shows Us Why We Need to Meet Our Neighbors, by Jane Sloan Peters
"In the case of President-elect Trump, solidarity means seeking to know the undesirable neighbor," writes Ms. Peters.
More: Election 2016 / US Politics / Donald Trump

The Editors
Show Comments (
9
)
Comments are automatically closed two weeks after an article's initial publication. See our comments policy for more.
Thomas Couture
6 years ago
I am amazed that Catholics are writing about the surprise of President Donald Trump winning the election. Let's review a few things: Madeline Albright was quoted that if a woman doesn't vote for Hillary there is a special place in hell for her? So it was all about women getting the job not the best suited American person? So Hillary stood (or sat) before congress to swear that her emails had complied with her high standards. The WikiLeaks have shown those standards to be self-serving and very disappointing. Then she is OK with a women's choice about abortions, yet my church bulletin is all about praying for the unborn, picketing in front of abortion clinics, never about Pope Francis global initiatives always about the American Bishop's focus. The footsteps drove President Trump to Victory. And we are surprised???? Help me understand, some people may listen to the rhetoric but the wiser ones also watch the footsteps for the truth. Is this too simple an explanation?
ed gleason
6 years ago
Here is my challenge to fellow Catholics. Trump's main promise is to have an immigration round-up squad is every city. In the 80s a very few Catholic parishes [and mine] gave sanctuary to Salvadorans fleeing Reagan armed death squads. SOME parishes not many. helped our Catholic Salvadorans. . Will Catholics stand up when Trump's/Bannon's rangers come sweeping down on barrios. rounding up our fellow 11 million Latino Catholics? My parish will stand up, but I bet no cathedrals will risk having their windows broken . There will likely be a lot of 'our prayers are with you' . Risk anything for Muslims.?.. don;t hold your breath. Better to immediately stop wringing hands and get organized. Ask your grandfather about how to handle the Black and Tans..... then prepare for a hell of a confrontation...AsK your pastor before Thanksgiving ..would his parish support sanctuary?. Or will US Catholics take a path like the Italians and the Pope did [close the windows] when the Roman Jews were marched a few blocks from the Vatican to a train on their way to the death camps. .Conservative and progressive Catholics always are calling for a strict conforming/courageous Church. Well, the chance for that is on its way so stand up or shut up.
Tim O'Leary
6 years ago
Ed - this was one of the worst things Trump said, and disqualified him for my vote. But I do admit that later on, he modified this to say he would round up those charged with crimes of property or violence, and he would be "more compassionate" with others. We will see. As to sanctuary, I think it a good idea for those not involved in criminal activity (I do not include being undocumented as a crime) to be protected, but I know so-called sanctuary cities have resulted in some criminals getting away from the police or ICE and re-offending - and their victims are disproportionately in their own neighborhoods - other undocumented immigrants.
Barbara Flaherty
6 years ago
Thank you for these true words of faith.
Sacred Activist
6 years ago
Could you please cite your source for the 52% statistic? It seems misleading. Do you mean 52% of people who voted for Trump were Catholic?
Tim O'Leary
6 years ago
The 52% are the total number of self-identifying Catholics who said they had just voted for Trump (in the CNN exit poll) -http://www.cnn.com/election/results/exit-polls/national/president. 45% for Clinton, 52% for Trump. Trump won white Catholics by 23 points (millions of the same voters had voted for Obama in 2008 - so a direct repudiation of his policies) - http://www.ncregister.com/daily-news/election-2016-breakdown-of-the-cath.... Also, most white women (53%) voted for Trump. Trump did slightly better than Romney with Latinos & Asians and won white Millennials (by 5 points). Hillary Clinton did worse with women than Obama. Clinton also won the lowest share of union households of any Democrat since 1980. To look at it another way (using CNN exit pol numbers), of all voters for Trump: 24% said they were Catholic, 61% said they were Protestant and 8% claimed they had no religion. Of Clinton Voters, 22% said they were Catholic, 39% said they were Protestant, and 21% claimed no religion.
C. Vanessa White
6 years ago
I am surprised that America magazineappears to reinforce that the only voices of value to address this issue are white voices. "America" I wish to let remind you about Catholic theologians from the Black, Asian and Latino communities. Consider resourcing members of Black Catholic Theological Symposium, Academy of Catholic Hispanic Theologians of the United States, Asian American theologians such Jonathan Y. Tan and Sophia Park. Thank you.
Sam Sawyer, S.J.
6 years ago
Thank you for your comment. We are committed to featuring responses from diverse voices, and are working to do so. Due to the challenges of sourcing and producing these response pieces quickly, they were not all published at the same time.
We recently published a piece by Cecilia González-Andrieu reporting on the experience of students of color responding to the election at Loyola Marymount University; that is now listed above.
We continue to encourage anyone who is interested in submitting a piece or a pitch for a story or a suggestion of an author to contact us via americamedia.submittable.com or at america@americamedia.org.
Tina Blackwood
5 years 10 months ago

I don't quite get it how church can support any politician. Promoting any of the candidates, preaches are already biased and subjective not talking about the fact that such things causes division among parishioners. I was planning to write my paper for me on the topic.