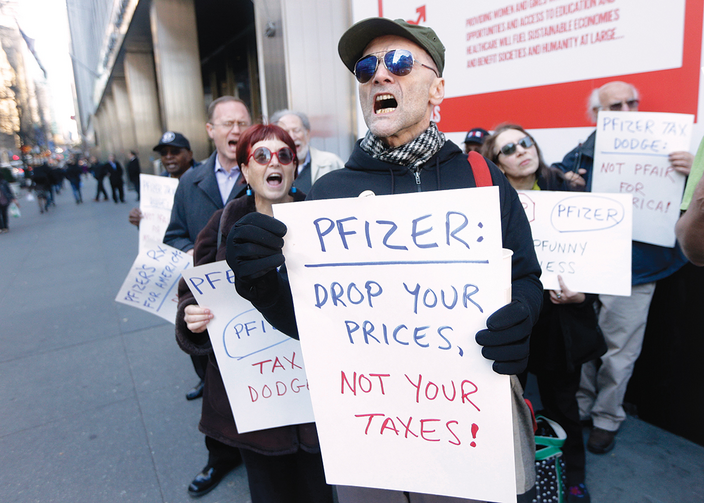 In the delivery room of a remote village clinic, on the operating table of a crowded city hospital and in myriad other venues, the ministry of Catholic health care takes place every day around the globe. Committed to carrying out the Gospel mandate to minister to the sick and poor, Catholic health care has emerged as the world’s largest nongovernmental health provider, delivering a quarter of all health services worldwide. Yet despite such impressive commitment and scope, the church’s health care ministry cannot fully embrace its good-Samaritan legacy as long as millions of sick people are trapped behind a deadly paywall, cut off from the lifesaving medicines they need.

Last year the media reported that Turing Pharmaceuticals had raised the price of one of its anti-infection drugs by 5,000 percent. Overnight the price of a single tablet of Daraprim, useful in treating life-threatening parasitic infections, rose from $13.50 to $750. Turing is not alone in demanding startling increases in medicine prices. Gilead Sciences Inc., which makes Sovaldi, a drug to combat hepatitis C, has become notorious for charging $84,000 for a 12-week regimen, which amounts to $1,000 a pill. Such medicines do save lives. But when medicines are markedly overpriced, millions of people, especially the poorest, lose out. Governments in developing countries, sometimes offered discounts, still find vital drugs priced beyond their means.

Take vaccines. The most compassionate caregivers cannot stop children from dying of preventable diseases when vaccines now cost 68 times more than they cost 15 years ago. According to the Holy See, two billion people lack access to essential medicines, a category that includes vaccines.

Many health care providers, including those committed to healing the world’s poorest, find themselves prescribing lifesaving medicines that only the world’s wealthiest can now afford. In 2015 the average price tag for brand oncology medicine, for example, exceeded $100,000 per year.

One cause of runaway prices is patent protections. The argument for medicine patents is that they protect innovative drug manufacturers from market competition until they can recover the capital they invested in research and development. When the patent-protection period ends, less expensive generic drugs can be marketed, lowering prices for the public and increasing availability.

But that argument does not account for the life-and-death character of many medicines, which makes them well suited for publicly funded research and development and ill-suited to monopoly protections. This was the reason medicines were historically considered off-limits for patenting. Nor does the argument hold up in practice. Some pharmaceutical companies relentlessly pursue, and are granted, extensions of patent periods, which increase their profits every day that generic competitors are blocked from the marketplace.

Today some pharmaceutical companies continue to set drug prices at hundreds of times their manufacturing costs after patent protections expire. Even companies with record-breaking profits routinely raise prices by double-digit margins. Profit, not health, has become the goal. Pope Francis has issued a warning about the inevitable end product of economic models built on a foundation of exclusion and inequality. “Such an economy kills,” he wrote in “The Joy of the Gospel” (No. 53).

Human suffering due to overpriced medicines is tolerated in part because the victims tend to be the anonymous poor. Not treating these sick people is unavoidable, some rationalize, given the need to provide incentives to companies to keep innovating. It is as if the only way to spur innovation were to award lucrative monopoly patents to those corporations that make the discoveries. But that argument is false, as the historical evidence and the current medicines system show.

History shows that medicine researchers and the communities that support them have accomplished great feats with no patent-provided pot of gold at the end of their research rainbow. Jonas Salk famously declined to patent the polio vaccine, saying the patent belongs to the people.

The creator of the first synthetic malaria vaccine donated the patent to the World Health Organization. These are the selfless acts of individual inventors, not the acts of public corporations beholden to stockholders. Still, until recently most nations prohibited monopoly patents on necessary medicines, and in those nations innovation rates were higher than in countries that granted monopolies. As the open source software movement has shown us, follow-up innovation is enabled when monopoly protections are held in check.

Two years ago Bain & Company, a consulting firm, conducted a study showing that top pharmaceutical corporations earned more than 70 percent of their cumulative revenue over a 20-year period from medicines developed by others. Increasingly, the business model for large pharmaceutical companies is to acquire patent rights to drugs developed by smaller firms and nonprofits, who have often relied on government funding of their research.

In fact, studies show that government funds, not private investments, are the driving force behind research that leads to medicines with widespread impact. The cancer drug Paclitaxel, for example, was developed through research funded by the National Cancer Institute, a division of the National Institutes of Health, which devotes $30 billion in taxpayer funds to research annually. Government funding also played the critical role in such breakthrough medicines as: the antiretroviral H.I.V./AIDS medicine AZT, the highly effective leukemia drug Imatinib, the prostate cancer drug Enzalutamide and the hepatitis C medicine Sofosbuvir. The same is true for major mental health medicines and many vaccines.

In the 1970s, the pharmaceutical industry lobbied Congress to make a change in U.S. law. The resulting Bayh-Dole Act of 1980 allowed recipients of government grants to claim the patent rights to resulting inventions.

The change allowed the patents for these and other government-funded medicines to fall into the hands of private companies, which could reset prices as high as the market would bear.

After direct government support for research and generous tax breaks are added to the total cost, some analysts calculate that private industry pays for only a third of U.S. biomedical research. So why overcharge the public for research subsidized by taxpayers? The profit motive has also led to a change of focus toward developing drugs that promise the highest profits (from treating first-world ailments), rather than drugs that would improve the health of huge numbers of the world’s poor. That explains, in part, why the industry spends more on marketing than on research.

The church has not ignored the crisis caused by overpriced medicines. Last year in Geneva, Archbishop Silvano Tomasi, the Holy See’s permanent representative to the United Nations and other international organizations, toldthe World Intellectual Property Organization that the status quo on medicines is unjust. “The fruits of scientific progress, rather than being placed at the service of the entire human community, are distributed in such a way that inequalities are actually increased,” Archbishop Tomasi said. He then quoted St. John Paul II’s message to the Jubilee 2000 Debt Campaign: “The law of profit alone cannot be applied to that which is essential for the fight against hunger, disease, and poverty.”

The Holy See has singled out for particular concern global trade agreements that “enhance the monopolies on life-saving medicines” and called for exemptions from medicine patent rules for the poorest countries. The U.S. Conference of Catholic Bishops has echoed these concerns. Catholic advocacy groups like Network and care providers like Maryknoll have joined public protests against U.S. government efforts, for example, to block poor countries from full access to more affordable generic medicines. The Sisters of Mercy order, a major player in Catholic health in North America, has worked with other faith-based organizations to persuade pharmaceutical companies to loosen their patent restrictions in poor countries.

It would help if everyday Catholics would become more fully engaged. The Trans-Pacific Partnership, currently awaiting an up-or-down vote in Congress, includes among its many provisions one that could force low-income countries to delay access to generic medicines. That is why Doctors Without Borders has said at the T.P.P. “will go down in history as the worst trade agreement for medicine access in developing countries.”

U.S. Catholics can also urge Congress to allow Medicare to negotiate prices for the drugs it buys. Since 2003, when Medicare was banned from negotiating prices, U.S. patients have paid the world’s highest prices for medicine. We Catholics can also insist that our governmental health agencies fully use their rights to allow generic medicine alternatives.

Above all, Catholics can embrace essential medicines as a human right rather than as a commodity for exploitation and profit. The Universal Declaration of Human Rights and subsequent treaties have recognized that human right, as has the Holy See (see “Pacem in Terris,” No. 64). As the U.S. Catholic bishops have pointed out, church obligations go beyond simply providing care: “Catholic health care should distinguish itself by service to and advocacy for those people whose social condition puts them at the margins of our society” (Ethical and Religious Directives for Catholic Healthcare Services, 2009).

To follow Jesus, Catholics must tend to the poor and sick, including all who suffer from lack of access to essential medicines. We must address the injustice that causes their suffering in the first place.

Show Comments (
5
)
Comments are automatically closed two weeks after an article's initial publication. See our comments policy for more.
Charles Erlinger
3 years 5 months ago
There is a huge amount of information in this article that requires a lot more thought than I, for one, have given to the subject.
Chuck Kotlarz
3 years 5 months ago
Follow the money. In 2014, for every dollar drug companies spent on elections, drug companies spent $7 on lobbying. Big wealth will have spent $9 billion in 2016 on elections and 10,000 lobbyists. The entire legislative and judicial branches of federal government cost $9 billion. Big wealth may soon leave “big” government (and perhaps US democracy) in the dust. http://www.truth-out.org/news/item/33010-how-much-of-big-pharma-s-massive-profits-are-used-to-influence-politicians
Chuck Kotlarz
3 years 5 months ago
The article perhaps complements "The Great Escape", a book by Nobel prize winner, Angus Deaton.
John Walton
3 years 5 months ago
If you have an HIV positive friend who's alive today, blame it on Gilead.
Chuck Kotlarz
3 years 4 months ago
Gilead is one of twenty companies that spent a total of $616 billion in the past five years buying back stock. Only six states have a GDP larger than $616 billion. Does that seem odd that twenty corporations over five years have more money for shareholders than forty-four states have for their entire state economy? Twenty companies alone can easily $9 billion on elections and 10,000 DC lobbyists. Who benefits when corporations spend $9 billion on politics? Voters or billionaire shareholders? How many billions of dollars spent on politics does it take for America drop to from the list of full democracy countries? America currently comes in at last place. Who’s covering the back of America’s next generation? Voters or billionaire shareholders? That's a decision only you can make. http://247wallst.com/investing/2016/06/23/20-companies-buying-back-the-most-stock-in-2016/
Advertisement

This article also appeared in print, under the headline “Remedies Beyond Reach,” in the November 7, 2016, issue.

Fran Quigley is clinical professor and director of the Health and Human Rights Clinic at Indiana University McKinney School of Law. He is the author of A Prescription for Change: 22 Reasons Why and How Medicines Should be for Patients, Not Profits.