Editors: 'See the person,' not the party, for a healthy country 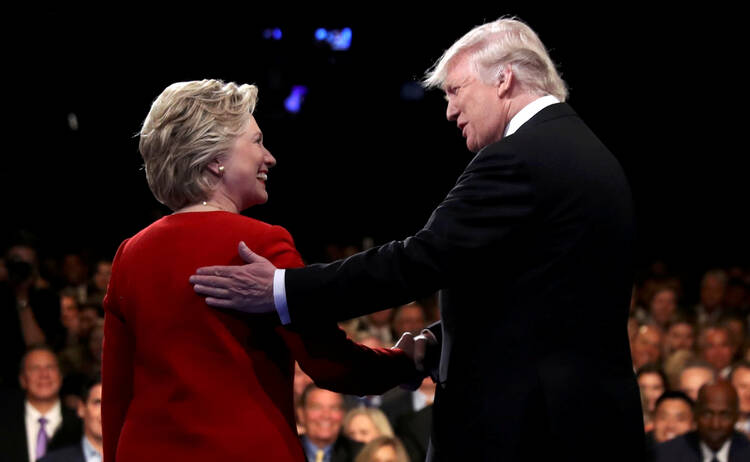 Pope Francis recently voiced concern about countries that “are too politicized” but “do not have a political culture.” That is a good description of where the United States is heading: deeply split by political differences but losing the ability to discuss such differences civilly, much less settle them. Candidates for public office often promise to end “politics as usual,” but the United States needs to restore a particular kind of politics as usual—namely, the ability to hold elections and achieve political compromise without bogging down in anger, resentment and suspicion.

The presidential election is only a few weeks away, and in a recent Washington Post poll, 49 percent of those who support the Republican nominee, Donald J. Trump, said they were “not confident” the votes will be counted accurately, a view shared by 18 percent of those who support Hillary Clinton, the Democratic candidate. Twelve years ago, when the Republicans controlled the White House, those numbers were reversed, with Democrats far more worried about an inaccurate count. Polls show that voters’ perceptions of the national economy, as well as their recognition of climate change and of racial discrimination in the United States, also fall along partisan lines. Both Democrats and Republicans seem quicker to excuse bad behavior by their own candidates, with political identity threatening to replace individual conscience. Party loyalty is getting in the way of good politics.

Several factors help explain this growing tribalism in U.S. politics. First, most democracies have nonpartisan agencies to administer elections, but in the United States that function goes to elected officials, many of whom unapologetically favor their own parties when it comes to determining who can vote and where, and how votes will be counted. This practice sends a message to voters: There are no spaces safe from partisanship. Another factor is the filtering of social media, in which unverified rumors, as well as the shaming and intimidation of those with different views, get equal billing with more sober news, as long as enough like-minded friends click “Like.” Finally, the two major parties have largely given up on making reasoned arguments to voters and concentrate instead on maximizing turnout among their most committed supporters on Election Day.

When elections take on the feel of a sports rivalry, we risk losing the sense of what is best for society as a whole. This is especially true this year, with a campaign almost entirely about personalities that leaves little time to discuss subjects like poverty, wage stagnation and a broad range of life issues. Concern for our neighbors, both inside and outside the United States, has almost vanished, as evidenced by the demonization of refugees from the civil war in Syria.

Instead of considering the common good, we simply pick sides. Larissa MacFarquhar of The New Yorker found voters in West Virginia ready to support Mr. Trump because “it’s like giving the middle finger” to the media elite in New York and Washington. They are not wrong to detect a feeling of superiority among that elite; witness Mrs. Clinton’s charge that half of Mr. Trump’s supporters are “deplorables” motivated by bigotry. Many Democrats have made the argument that the United States would be better off without the South, and after the 2004 election, many shared a map deriding states that voted for George W. Bush as “Jesusland.”

Mr. Trump has encouraged tribalism, using language that suggests immigrants and non-white citizens are communities apart from other Americans—that they are not neighbors but aliens. In the first presidential debate, Mr. Trump’s suggestion that it was “smart” to avoid paying taxes showed how little he values civic responsibility. For her part, Mrs. Clinton frequently addresses middle-class concerns, like the cost of college tuition, but seems less eager to discuss our obligations to the poor. Her running mate, Senator Tim Kaine, used his time at the vice presidential debate to criticize Mr. Trump’s divisive rhetoric but had little to say about social justice as a guiding principle in government.

The timidity about speaking of a common good—not only equal rights but respect for life and equal dignity for all—feeds cynicism about government and makes possible a view of society that is reduced to individualism and competition. Disillusionment with politics may also build support for a “nonpolitical” leader, often a euphemism for a strongman with even less regard for civic norms or patience for political reform.

We can hope that the end of this loud and dispiriting election year will be an opportunity to renew a functional political culture in the United States. Perhaps, following the lead of Pope Francis, this means a greater effort to “see the person,” not the party. We should seek to foster a public debate in which we truly listen to each other instead of taking shelter in our red and blue echo chambers.

The Editors
Show Comments (
4
)
Comments are automatically closed two weeks after an article's initial publication. See our comments policy for more.
Lisa Weber
5 years 3 months ago
The problem that will remain to be addressed after the election is corruption. We have allowed some of our major industries to become openly corrupt and neither party seems to be interested in addressing the corruption. We give pharmaceutical companies a protected market and fail to regulate prices. Campaign finance, financial markets, and healthcare also need cleaning up. If we cannot expect our government to deal with corruption, we end up with no faith in "the system." The polarization of politics is the end result.
William Rydberg
5 years 3 months ago
Not a word about active discussions by Political Operatives to undermine the Church in America? How bizarre!
Chuck Kotlarz
5 years 3 months ago
Trump and Clinton…perhaps the devil we know is better than the one we don’t. The donor class is the devil we don’t know. The donor class is not a bunch of top lawyers, brain surgeons and CEO's. Seriously, they don’t make enough. Twenty-five of the highest income members of donor class took home more money than all the Fortune 500 CEOs combined. “We the people” did not vote for anybody in the donor class, yet $3 billion a year buys the donor class 10,000 DC lobbyists. Why would the donor class spend billions on lobbyists and then billions more on elections unless Washington DC had the best payback? Years of lobbying have perhaps already created significant donor class legislation and the current congressional dysfunction would all but ensure donor class legislation remains as is. Dysfunction may also lead some to conclude lobbying has little impact and see little merit in challenging donor class lobbyists.
Martha Murray
5 years 3 months ago
It seems to me the disillusionment extends far beyond politics. Living in a culture of "throw always" is difficult at best for many of us. We look to our Church and her leaders for unity and to speak out against those who treat the gift of life so poorly. We the congregation, need our priests, religious, church leaders and organizations to be on the same page with us, in denouncing the reality of evil that clearly divides us regarding social issues and injustice. Hopefully, this election is an eye opener to all, just how far the sheep have strayed, in and outside of the Church.