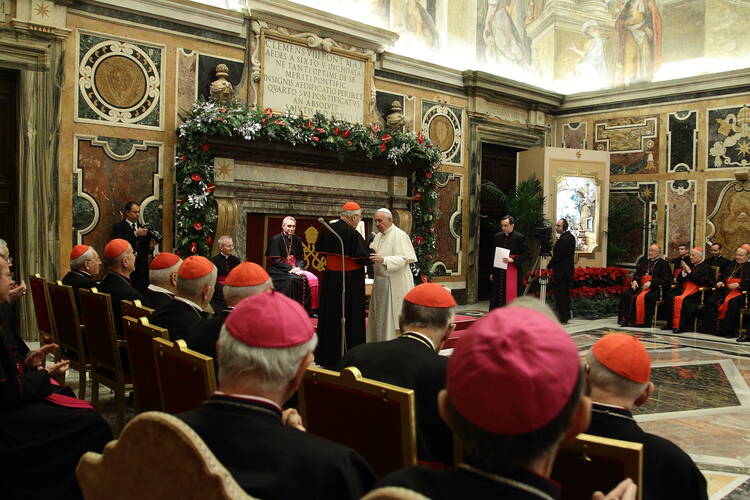 When Pope Francis places the red hat on 13 new cardinals from five continents and 11 countries on Nov. 19, he will have created 44 of the 120 electors that have the right to vote in a conclave to choose his successor. Moreover, he will have ensured that unlike past conclaves, European electors will no longer have the majority.

His choice of cardinal electors reflects the criteria and concerns that have driven his decisions in the previous two consistories in 2014 and 2015. Pope Francis seeks to represent the universality of the church partly through his attention to “the peripheries.” He prefers humble pastors with, as he has said, “the smell of the sheep.” He has made an effort to reduce the number of Europeans and Italians in the college of electors, partly by abandoning the tradition that appointment to certain sees automatically brings a red hat. He has also restricted the number of Roman Curia cardinals by reserving the red hat only for the prefects of congregations (or their equivalent).

As a result of his announcement on Oct. 9, there will be a total 121 electors from 59 countries on Nov. 19, but that number will reduce to 120 from 58 countries when Cardinal Sarr from Senegal reaches the age of 80 on Nov. 28 and loses his voting right. Electors are cardinals under the age of 80 who have the right to vote in a conclave. For the next consistory Francis will abide by the ceiling of 120 electors established by Paul VI in 1975.

Ever since his election as pope in March 2013, Francis has given special attention to what he calls “the peripheries” of the church and the world. That is particularly evident in his selections today. In a major surprise, he gave the top slot to the courageous Italian nuncio in Damascus, Syria, Archbishop Mario Zenari. It was yet another powerful sign of his deep concern for the suffering people, as well as the church, in that war-torn country. The archbishop has been in Syria for the past eight years and, in a decision that appears to be without precedent, Francis announced that Cardinal-elect Zenari will remain in that post as cardinal.

Significantly too Francis gave the number 2 slot on his list to another courageous archbishop, Dieudonné Nzapalainga, C.S.Sp., of Bangui, in the Central African Republic. Francis got to know him well when he visited the country at the end of November 2015, when the conflict was still going on, and opened the Holy Door for the Jubilee of Mercy there.

The decision to give the red hat to Patrick D’Rosario, the archbishop of Dhaka, in majority Muslim Bangladesh—a nation he will visit next year—is yet another example of Francis’ attention to “the peripheries.” So too are his choices to give the cardinal’s hat to Archbishop Baltazar Enrique Porras Cardozo of the archdiocese of Mérida in the troubled Venezuela and to Carlos Aguiar Retes, archbishop of Tlalnepantla in Mexico, which he visited in February of this year. Reaching to another periphery, he is giving the red hat to Sergio da Rocha, archbishop of Brasilia, the federal capital of Brazil, the country with the largest Catholic population in the world that is today in a grave political crisis over corruption.

In naming the new cardinals, Francis showed yet another kind of attention to “the peripheries” by giving red hats to prelates in countries that have never before had a cardinal: Bangladesh, the Central African Republic, the Island of Mauritius, Lesotho, Malaysia and Papua New Guinea. It should be noted that in addition to Bangladesh, the new cardinals for Mauritius—Maurice Piat, archbishop of Port Louis and John Ribat, archbishop of Port Moresby in Papua New Guinea—also become electors.

A glance at the biographies of the new cardinals reveals that Francis has clearly chosen pastors who are humble men, not aspiring to be princes; men of dialogue, not culture warriors; men who know how to show mercy in their ministry.

Under his pontificate, that is the template for future bishops and cardinals.

In the upcoming consistory, Francis will only make three European cardinal electors: Archbishop Zenari from Italy; Carlos Osoro Sierra, the archbishop of Madrid, whom he appointed in one of his several moves to give a new direction to the Spanish church; and Jozef De Kesel, archbishop of Malines-Bruxelles, Belgium, a man of dialogue who becomes the new leader of the Belgian church.

He decided to honor to other meritorious Europeans, both over 80: Msgr. Renato Corti, Archbishop Emeritus of Novara, Italy, and Father Ernest Simoni, a priest of the archdiocese of Shkodrë-Pult, in Scutari, Albania, who so moved the pope during his visit to Tirana by the inspiring testimony of his years of imprisonment under the communist dictatorship in his country.

In his first two consistories, Francis did not make any cardinal from the United States, but this time he showed his great love for the church in this country and surprised the pundits by assigning red hats to three Americans: Blase Cupich, archbishop of Chicago and his first major appointment in the United States; Kevin Farrell, former archbishop of Dallas but now prefect of the newly created Dicastery (department) for the Laity, the Family and Life; and, perhaps the biggest surprise, Joseph Tobin, archbishop of Indianapolis, a man of dialogue and vast international experience as former head of the Redemptorist Order and former number two at the congregation for Consecrated Life. By choosing Cardinal-elect Tobin, he also opted for a pastor that is in a diocese not known as a “cardinalatial” see.

At the March 2013 conclave that elected Francis, Africa had 11 electors, Asia and Oceania 11, Europe, 60 (including 28 Italians), Central and South America 13, North America (USA, Canada and Mexico) 20.

These new appointments indicate that Pope Francis is slowly but surely ensuring that Europeans will not have the majority at the next conclave and that Italians will have a diminished presence as well. But the church in the rest of the world, particularly in the southern hemisphere, will have a greater representation. One can expect this trend to continue while Francis is pope.

@gerryorome
Show Comments (
1
)
Comments are automatically closed two weeks after an article's initial publication. See our comments policy for more.
William Rydberg
5 years 10 months ago
I don't know if its just a symptom of being so close to HEAD OFFICE foor too long, or too much overfamiliarity or what? But this article actually reads like a racing form. Put together by another guy from HEAD OFFICE. This is sad because it lacks the Catholic dimension. For every faithful Apostle of Christ knows intuitively that they are where they are because they are held up by BOTH the Spiritual and Temporal Support furnished by the people that remain back home. Church Tradition has long recognized this fact-if one follows the writer's implied logic giving a red hat to Chicago becomes something worth reassesing...NOT! Point is the Catholic Church needs BOTH the Cardinal Prelate AND the people of that Particular Church/Diocese because WE ARE CHURCH! Looking at Cardinals as chessmen on a world board map is not Catholic in my opinion. WATCH OUT FOR THE RETURN OF CLERICALISM BY STEALTH! in Christ,