This Jesuit has an idea to stop the violence in Syria: stop selling them weapons

This Jesuit has an idea to stop the violence in Syria: stop selling them weapons 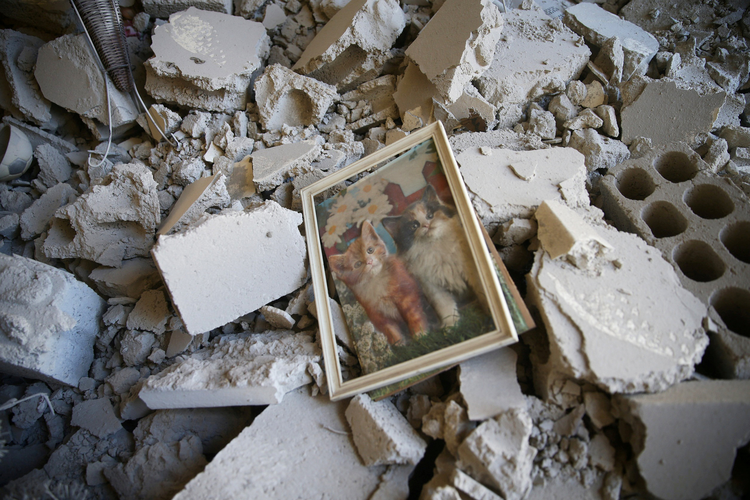 A framed picture of kittens lies amid rubble in Damascus, Syria, July 27. Christian patriarchs residing in Damascus urged the international community to "stop the siege of the Syrian people" and to lift international sanctions, which they say are deepening the suffering. (CNSphoto/Bassam Khabieh, Reuters).

In a June 14, 2013, report on the war in Syria, the BBC raised a fundamental question: “Who is supplying weapons to the warring sides in Syria which has kept the conflict going?” More than three years later that remains a key question that demands an honest answer, but it is not being given one. Why?

The conflict, which began in March 2011 in the context of the Arab Spring protests, has already caused an estimated 400,000 deaths, forced 4.5 million of its 22 million citizens to leave the country and become refugees, internally displaced 6.6 million others and left 13.5 million people dependent on humanitarian aid.

It continues because there is a steady flow of arms to the Assad regime, to the rebels, to ISIS and to others engaged in the fighting. One does not need to be a rocket scientist to know that if the supply of arms stops, the war will have to end.

Cedric Prakash, an Indian Jesuit who lives in Beirut and works as advocacy and communications officer for the Jesuit Refugee Service in the Middle East, emphasized this point when I spoke to him during a visit to Rome for Mother Teresa’s canonization and asked what is keeping the war going.

Apart from the lack of political will on the part of the big players, he identified several factors. First among them is that the Assad regime blames the rebels for the conflict and wants to end any rebellion, wherever it is. Then there is ISIS, and the regional clash between Saudi Arabia and Iran, between Sunni and Shiite Muslims. There are also “many, many other stakeholders, interested parties, Western interests like the arms and ammunition industry,” he said.

“Everybody knows that every single faction in this conflict milks the same cow!” he said. Father Prakash visits Syria frequently and has seen that the shells used by the regime, the rebels and ISIS all bear the same brand. Denouncing the global arms industry as “absolutely scandalous,” he said it “should be condemned by all interested groups wanting peace in the area.”

He noted that whenever Pope Francis speaks about the refugees, he also denounces the arms trade that keeps the conflict going. He recalled that in the pope’s address to the U.S. Congress on Sept. 24, 2015, when referring to the many armed conflicts throughout the world, he said: “Here we have to ask ourselves: Why are deadly weapons being sold to those who plan to inflict untold suffering on individuals and society? Sadly, the answer, as we all know, is simply for money: money that is drenched in blood, often innocent blood. In the face of this shameful and culpable silence, it is our duty to confront the problem and to stop the arms trade.”

Father Prakash concurs: “If we want to stop the war in Syria, then we have to stop the flow of arms to the different groups in conflict.” But echoing the pope’s words, he added, “the interests are big, the profits are big,” and so arms continue to flow freely.

On the other hand, he said, Saudi Arabia and India are the world’s largest arms importers, followed by China and the United Arab Emirates. U.S. officials have assured him they would never sell arms to ISIS or the Assad regime, but the question remains: How do they get arms and ammunition?

According to the J.R.S. officer, there are thousands of mercenaries who are smuggling these arms to anybody who is able to pay. But from whom do the mercenaries get these arms in the first place? This is a question that needs to be addressed, he insisted. It is a question of political will to find out for whom the arms and ammunitions industry are producing and to whom they sell their wares.

These are serious questions that need to be addressed with determination. Otherwise the conflict in Syria will continue, as will others in the region, Father Prakash said.

This article also appeared in print, under the headline “The Source of Suffering,” in the October 3, 2016, issue.