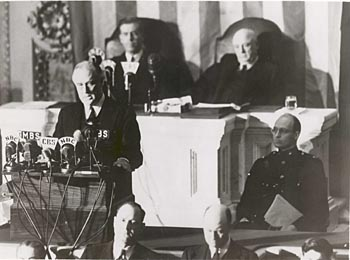 On this day 74 years ago, the United States was drawn into a war—a world war—for the second time in nearly 30 years. In a surprise action, the Empire of Japan attacked the American bases at Pearl Harbor, Hawaii, leaving thousands dead (and as many injured) and our Pacific fleet practically wiped out. That devastation would not be equaled until 60 years later, on Sept. 11, 2001, when a similar number of casualties would be incurred with the two planes crashing into the Twin Towers of the World Trade Center in lower Manhattan. But in 1941, President Franklin D. Roosevelt (accompanied by Edith Bolling Wilson, widow of the former president who had to declare America’s entrance into World War I some 24 years previously, in 1917) entered the chamber of the House of Representatives to declare what everybody knew and had dreaded to finally hear. President Roosevelt, with Vice President Henry A. Wallace and Speaker Sam Rayburn seated behind him, appeared before a bank of microphones and uttered words for history. With the gravity the urgency of the moment required, the president said:

Yesterday, December 7th, 1941—a date which will live in infamy—the United States of America was suddenly and deliberately attacked by naval and air forces of the Empire of Japan…

In an address that only lasted seven minutes and which was heard by 81 percent of the American radio-listening public, FDR listed all the places where the Japanese military machine attacked various outposts in the Pacific and pointed out that this nation would take action to combat this violation of American peace.

In the world of today, which has to deal with terrorism of another kind—but still terrorism—the words from FDR’s time still have resonance for our day. He continued:

…The facts of yesterday and today speak for themselves. The people of the United States have already formed their opinions and well understand the implications to the very life and safety of our nation…
No matter how long it may take us to overcome this premeditated invasion, the American people in their righteous might will win through absolute victory…
Hostilities exist. There is no blinking at the fact that our people, our territory, and our interests are in grave danger.

Before he ended his peroration, asking that the Congress declare that “a state of war” has existed as a result of “the unprovoked and dastardly attack” by the Japanese, the president made one final declaration, in ringing Rooseveltian tones that people had come to expect from their elected president, now Commander-in-Chief:

With confidence in our armed forces, with the unbounding determination of our people, we will gain the inevitable triumph—so help us God.

It became known as the “Infamy Speech,” one of the greatest of presidential addresses every given. (You can see selections of FDR’s address before Congress in this clip from YouTube.) Also known as the “Pearl Harbor Speech,” its words have lived on through the decades since they were first uttered. President Roosevelt made many additions and deletions to the text before they became the words known to the American people—and to history.

And now, on this, the 74th anniversary of that attack and FDR’s subsequent address, we are now, as Pope Francis has phrased it, “a third world war by piecemeal” where the entire globe is consumed by conflicts of every kind, whether they be of political, military, or religious in nature. It is not warfare in the traditional sense, where they are two competing armies, battling it out in the field for tactical supremacy. However, the war we are undergoing is a war of political ideology in which religion is used for nefarious purposes—a “war” that is even more dangerous and intransigent. How and when this will end, we do not know.

In an editorial on the first anniversary of Pearl Harbor (Dec. 5, 1942), America’s editors wrote,

the record is incomplete that fails to note the debit side of war's revelations. United against the outer foe, we still tolerate the violation of democracy at home. Egotism, hatred, greed still live. Politics are played upon a new theatre, but they are still played. Factions and ideologies lay their plans for future vengeance in the post-war world. Hitler still lives, as yet unconquered and unpredictable…

The only thing that is certain is that for peace to be restored, concerted action will have to be taken by people united in the realization of the threat before humanity. This will be a hard thing because the world is sick of war and the causes of it and yet we are embroiled in it, seemingly all the time. As Americans, we want to (and should) do what is right and avoid those acts that could lead us wrong (as in FDR unfortunately did in the internment controversy). It will be difficult to do; standing up for our ideals without succumbing to our basest fears. That task will be the great balancing act. In the coming presidential election year, both candidates and voters have the duty to own up to that, if we are to be worthy of our birthright as citizens.

As difficult as all this is, we will somehow survive this crisis, as we have every other one in our history. As America’s editors put it on Pearl Harbor’s first anniversary: “We have looked into the abyss and we live. We ask that God purify our hearts and lives and steady our hands and minds, unto victory.”

This is the key for our times: that we face the abyss and “we live.” And equally important, we all need to remember what the editors also said at the time: “our prayers, sober as they be, are no longer tinged with terror, but with a great and certain hope.”

Like FDR in his times, we, in our times, must make his words our own: we must “make it very certain that this form of treachery shall never again endanger us.”