Trigger Warning: On Not Looking at Dead Syrian Babies 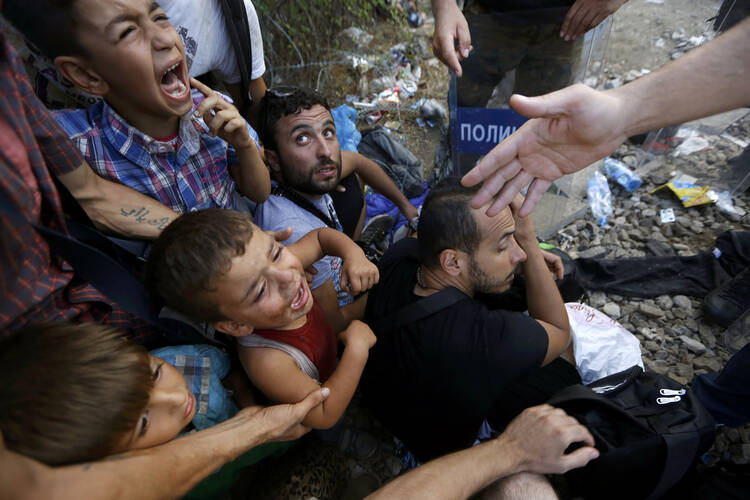 Images of drowned babies washing ashore in Libya over the weekend have circulated widely over the Internet. On Sunday I swallowed hard and took a look at them. The images are about as gut-wrenching as you might imagine they would be. Little boys and girls who just a short time before had been filled with fear and dread, but life, and perhaps also a little hope. Children in shorts and pjs and diapered toddlers who had not long before these terrible scenes no doubt been anxiously consoled by desperate parents on this treacherous crossing, now awash like so much flotsam on a Libyan beach. (I will not link to them, but encourage those of you who can stand it to confront these images yourselves.)

I pity the photographer who took these pictures, but I honor his steadfastness in doing so. It must have been difficult. Not as difficult, of course, as the decision the parents of these drowned children made, at an abyss of despair, to put everything at risk in order to escape the suffering and mayhem of their villages in Syria, Gaza and other Middle East and African states. They gambled on the Mediterranean, betting on mercy, and they lost everything.

But what to do with these images? I know here at America they are essentially unpublishable. That has been the call made by most mainstream press in the United States, which may have reported the drowning victims and even the number of children who died, but did not share these grim pictures.

We are family-oriented publications and these photos are too shocking, too horrifying for our readers. We editors make the call to protect you readers from these heart-searing photos. But I wonder if we do a disservice to these children and their parents and all the others lost so, and finally to ourselves, by hiding these images from view.

The Syrian civil war grinds on through its fourth year; we read the numbers of casualties and hear about the latest atrocities from ISIS or another barrel bombing from a Syrian military helicopter. On some level that suffering registers, I suppose, but to experience something closer to the full force of it, don’t we have to look at these pictures? Don’t we have to see these children? Don’t we owe it to them?

I don’t know if viewing such misery is enough to shock us, the bystanders, the rubberneckers to this unprecedented suffering, into action; I’m not sure what action we can even take, to pry apart combatants so fiercely determined to inflict harm upon each other. But a more courageous look at this one desolate outcome may be enough to compel some of us to demand an end at least to these treacherous journeys—whether they end in death in the back of a truck on a country roadside or on a capsized inflatable on the cold sea. Perhaps having the nerve to look at these pictures will be enough to compel more of us to demand that our governments and the United Nations step up efforts to end the carnage or at least step up their response to it (as Angela Merkel of Germany did this week): commit to the creation of no-fly zones and safe areas where refugees seeking to escape the misery of Syria can be processed and protected. Get to them before they began a dangerous passage that too often so far has ended with lives and hopes—and these precious children—awash on sandy beaches in the middle of a dark night.

Kevin Clarke
@clarkeatamericaclarke@americamagazine.org
Show Comments (
4
)
Comments are automatically closed two weeks after an article's initial publication. See our comments policy for more.
Paul Ferris
6 years 8 months ago
I know there is little or next to nothing I can do, but as a citizen of the United States I can call my Congressmen and women and remind the readers of this article that many people who are trying to come to the United States from Central and South America are dying horrible deaths in the deserts of Arizona, and Texas. And who is the most popular candidate for President in the Republican Party and his major issue ? I need not give the answer to anyone intelligent enough to read America Magazine. My outrage against IS and Assad in Syria and Iraq will do little but outrage against our own so called leaders may be another story. Ironically, I saw coverage devoted to the deaths in the deserts of Green County Texas on Al Zazeera America. Other American based news organizations have given this horrible fact little or no coverage of which I am aware.
PATRICK NUGENT
6 years 8 months ago
Amen!
Bill Mazzella
6 years 8 months ago
Jesus had compassion on the multitude. Especially people like this. Most of the Christian world is taking a pass. The ethics is still Plato and Aristotle. Not Jesus Christ.
Tim O'Leary
6 years 8 months ago
This is a terrible tragedy before our eyes, as thousands die trying to get away from the worst human-caused horror since the Nazis. The immediate response must be to provide refugee camps and food and shelter to those already in Europe. And the media has a duty to show the worst of what is happening to shake the previously complacent, and now terrified European governments, to respond quickly. We can help a little now by supporting charities like CRS. The longer response is the need for thoroughly defeating ISIS and facilitating trade and human rights in the islamic countries presently in turmoil. (Just as our own immigrant problem will only be solved by defeating the Mexican drug cartels and, by trade, increasing the living standards in Mexico). We are sorely learning that just walking away from war conflicts can be as devastating as going in. The sins of omission of Obama and his European counterparts is in danger of being far worse than the sins of commission in the last coalition.