My father, Thomas Merton and the legacy of nuclear warfare

My father, Thomas Merton and the legacy of nuclear warfare 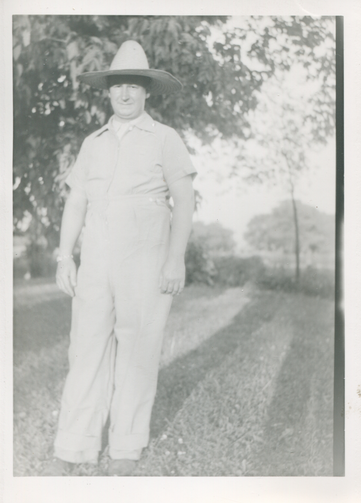 Thomas Merton and my father were born within a month of each other, 100 years ago, at the start of World War I. Each suffered early parental loss; one became a poet, the other—a scientist.

Merton described being born “in a year of a great war, and down in the shadow of some French mountains on the borders of Spain” where “the world was a picture of Hell.”

“Not many hundreds of miles from the house where I was born, they were picking up the men who rotted in the rainy ditches among the dead horses in a forest of trees without branches along the river Marne,” Merton wrote in his autobiography.

Wesley Van Ornum was born on the West Side of Chicago, an area that became the epicenter of riots and firebombs.

Merton’s parents would die when he was young, and my father endured similar loss. My grandfather placed him in St. Patrick’s orphanage in Watertown, New York, before he was eight. Then my grandfather died. My grandmother, beset by external poverty and internal mental illness, wanted to take care of him, but couldn’t.

My father and Merton led vastly different lives. Yet each considered themselves peacemakers, possessed by a sense that their actions might prevent the world from ever enduring another century where 100 million souls were lost to war.

Merton’s life is well-known. Perhaps it is good to write more about my father.

During World War II my father, only years out of an orphanage, became a patriarch of sorts. After leaving the kindly domiciles provided by the Sisters of St. Joseph, he returned to Chicago and discovered his own mother was not only alive but in need of care. He was beloved by her family for this, and inherited their 10-acre “farm,” a small sliver of land north of Chicago next to the Milwaukee Road train tracks.

During those war years, he cared for his mother and the farm became a place his brothers, other relatives, and many friends could call home—or, at least a place where, if you stopped by, they would gladly take you in. I have many black and white photos to prove this!

Chickens and a goat and vegetables and fruits nurtured by Dad’s green thumb supplemented the war rations, and everything was shared. There was a dog named Snoop. My father, the most cautious of men, learned to take risks and even bought a motorcycle. It threw him into a tree, re-affirming his orphan views of how dangerous the world could be.

Five hundred miles to the south, Merton joined Our Lady of Gethsemani, the Trappist monastery, discovering a different kind of family that provided an antidote to his own particular variety of orphanhood. Merton suffered from insecurities created from an extended family that shuttled him back and forth between themselves and boarding schools.

Merton prayed furiously for peace.  Later the atrocities of World War II, particularly the creation of the atomic bomb, inspired his writings and even created a niche for him as a prophet of peace.

My father worked in a different manner for peace. Each day during the war, after some farm chores and making breakfast for others, he walked a block or two and caught the Milwaukee Road train to Chicago. Within a decade, through on the job training, he had become a practicing manufacturing engineer, working for companies that manufactured lenses.

These had many applications, and my father was one of an elite group that worked on the Manhattan project. He never talked about this much, but he always believed that his work had helped to bring about peace and save lives.

After a day of precision engineering, and weekly trips to New York City or Washington, D.C. to work with the other engineers and scientists, he walked that block or two from the train back to the farm, where the chickens, potato plants and newly discovered family welcomed him.

Might we also observe Merton worked for industry—the peace industry? Within it, he and others wrote books, gave speeches, made money and discovered a way to make a name for themselves and receive worldly recognition. They even made money. There is nothing wrong with this as it is the way in which the world works, and capitalism provided Merton generous book royalties which helped pay the bills of the large Trappist houses.

In the late 1990s, after my father died, I discovered a small award in recognition for his engineering work during World War II. A few years later, while visiting the War Museum at West Point, I encountered the same award there, in a case with material related to the bombing of Hiroshima.

There are other men and women around the world who quietly provided their talents and lives to causes they believed would bring about peace. They don’t receive public acclaim or attention but they, too, worked lifetimes with sincere motivations.

Was my father, like the scientists who repudiated their earlier work, aghast at what he had worked on? I do not know. But I never saw him intentionally cause harm to someone else, and bugs of various varieties found inside the house that he, along with sheet of paper, provided a handy taxi service where they could quickly be returned to nature.

On this 70th anniversary of a world-changing technology, thinking about my father and others—in their own minds peacemakers—seems an appropriate Christian task, one that can honor good motives in different political ideologies.

We might also hope, that in tandem with the pope’s recognition of the horrors of the first two atomic bombs, there is a concurrent abhorrence of tens of millions of human souls brutalized and murdered by four totalitarian political regimes. As radio commentator Paul Harvey might have said, this is, “the rest of the story.”

Let’s hope that there is a way for those like Thomas Merton as well as my father to recognize the kindred motivations in each other, and to stand alongside each other, at least in respect if not agreement. I always wonder—what would they have talked about if they could have met each other?

I know Merton would have liked his farm, and would have been welcome there.

Show Comments (
1
)
Comments are automatically closed two weeks after an article's initial publication. See our comments policy for more.
Beth Cioffoletti
5 years 5 months ago
Your father sounds like a very kind man, with a gift for taking care of those he loved. My father was the same way, and born a few years before Merton (1907). He was a dairy farmer and we lived a few miles down the road from the Abby of Gethsemane in KY. Sometimes I joined my father as he joined the monks at the early morning Lauds. I would watch the monks gather from the balcony above. Now I know that Merton was surely among them. Merton was becoming popular then (1950s) and my father bought his books at the monastery as they were published. They were put on the top of a corner cabinet. He didn't read them, and I didn't start reading them until 1968, the year that Merton died. Merton was ahead of his time. Most Catholics of that era could not grasp the notion of deep structural evil in the American quest for "peace". But Merton did more than just "pray" for peace. He dared to open up the question of atomic warfare and place it into a spiritual dimension. We're only now beginning to get it.
More: Thomas Merton