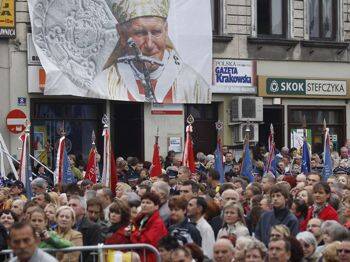 Pope John Paul II was a true believer, a courageous voice of truth and a man whose witness to the faith grew more eloquent as his ability to speak declined, Pope Benedict XVI and others who worked closely with the late pope said at events for his beatification. "John Paul II is blessed because of his faith—a strong, generous and apostolic faith," Pope Benedict said May 1 just minutes after formally beatifying his predecessor. In the beatification proclamation, Pope Benedict said that after a consultation with many bishops and faithful and a study by the Congregation for Saints' Causes, he had decided that "the venerable servant of God, John Paul II, pope, henceforth will be called blessed" and his feast will be Oct. 22, the anniversary of the inauguration of his pontificate in 1978. Italian police said that for the beatification Mass more than 1 million people were gathered in and around the Vatican and in front of large video screens in several parts of Rome. The next morning 60,000 people gathered in St. Peter's Square for a Mass in thanksgiving for the beatification.

The official celebrations began with a nighttime prayer vigil April 30 at the Circus Maximus, the site of ancient Roman racetrack. The crowd—estimated at about 200,000 people—cheered French Sister Marie Simon-Pierre, whose cure from Parkinson's disease was accepted as the miracle that paved the way for Pope John Paul's beatification. The nun beamed as she recounted her unexpected healing.

She said when she was diagnosed with Parkinson's in 2001 at the age of 40, she found it difficult to watch Pope John Paul, who suffered from the same disease. "I saw in him the image of my illness. But I admired his strength and courage," she said. Two months after the pope died, her condition worsened. Then, after prayers to the late pope, she awoke early one morning feeling well rested. "I felt something had changed in me, and I was healed," she said. The crowd in the Circus Maximus erupted in applause.

Many others in the crowds for the events also had personal stories about Pope John Paul. Likewise, Pope Benedict ended his homily at the beatification Mass sharing his own personal story.

"I would like to thank God for the gift of having worked for many years with Blessed Pope John Paul II," he said. As prefect of the Congregation for the Doctrine of the Faith from 1982 until his election in 2005, Pope Benedict said he worked at the pope's side "and came to revere him."

"His example of prayer continually impressed and edified me: he remained deeply united to God even amid the many demands of his ministry," the pope said. Pope Benedict said that even at the moment of his death people "perceived the fragrance of his sanctity and in any number of ways God's people showed their veneration for him. For this reason, with all due respect for the church's canonical norms, I wanted his cause of beatification to move forward with reasonable haste."

After the Mass, Pope Benedict went into St. Peter's Basilica and knelt in prayer for four minutes before Blessed John Paul's casket, which was set in front of the main altar. After the pope left, the concelebrating cardinals filed up to the wooden casket, touching it lightly and kissing it.

Later, the Vatican opened the basilica to the general public and kept it open until 3 a.m. Vatican police said 250,000 people filed past the casket or knelt in prayer near it in those first 13 hours. The basilica was opened again after the thanksgiving Mass May 2 so more people could pay their respects.

Presiding at the Mass of thanksgiving May 2, Cardinal Tarcisio Bertone, Vatican secretary of state, thanked God for "having given us a pope able to give the Catholic Church not only a universal reach and a moral authority on a global level like never before," but also one who helped Catholics be "more spiritual, more biblical and more centered on the word of God."

"Finally, we thank the Lord for having given us a saint like him," Cardinal Bertone said.

Some have criticized the "fast tracking" of John Paul II toward canonization as unfair to other candidates and unseemly because of certain decisions he made regarding the church's ongoing scandal of clerical sexual abuse. But Father James Martin, S.J., writing at America's "In All Things" blog said that the church was "quite clearly responding to the will of the people, millions of whom are devoted to Pope John Paul. ('Santo subito!' they shouted at his funeral.)" Father Martin added that blessed John Paul II was not being beatified because of his decisions as a pope, but because of who he was as a person.