Progress and Challenges as Africa Prepares for Synod 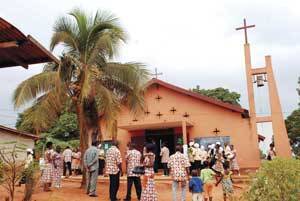 Africans preparing for the Special Assembly of the Synod of Bishops for Africa, to be held in October 2009, are emphasizing the need to find concrete ways to address the problems of a continent that has made much progress since the bishops’ last synod in 1994, yet still struggles with issues of poverty, justice and reconciliation. Pope Benedict XVI is scheduled to present the synod’s working documents on March 19 in Cameroon. A survey of some of the issues on the agenda reveals the promise and the challenges the synod will face.

Globalization. Poor African countries “have become more entwined with globalization” since 1994, said Peter Henriot, S.J., of the Jesuit Center for Theological Reflection in Zambia. For example, free market programs and policies imposed on Zambia by the World Bank in return for loans “might have made the economy more efficient, but it has no social face,” Henriot said, explaining that the required cuts in government spending have had a detrimental effect on important social programs. “We have lower literacy levels, a higher AIDS rate and other health concerns,” Henriot said, because “curtailed budgets [have] had a negative impact on hospitals and schools.” Henriot also noted that Africa is particularly hard hit by the global economic crisis. “The poor are becoming poorer [because] the price of basic foods in African countries is affected by skyrocketing prices in First World countries,” he said.

Peace and Justice. The political landscape in many African countries has changed greatly since the last synod. Since the 1994 Rwandan genocide, which claimed the lives of an estimated 937,000 people, the country has undergone a “gradual democratization,” said Anthony Egan, S.J., of the Jesuit Institute–South Africa, “and its infrastructure has improved dramatically.” Yet “the hostilities and prejudices still run deep” between ethnic Tutsi and Hutu, he said.

In Angola, where a 27-year civil war ended in 2002, the once-strained relations between church and state are good, said the Rev. Belmiro Chissengueti of the Angolan bishops’ conference. “For the first time church and civil society will have a chance to participate in the process” of drafting a new constitution, he said. Yet problems remain. Despite the country’s immense resources, most Angolans live on less than $2 a day, and one in four children dies before the age of five.

Conflicts continue to rage in places like Sudan, where intensifying fighting threatens the 2005 Comprehensive Peace Agreement that ended more than two decades of civil war. There is also the challenge of how Africa is to deal with the accusations of genocide in Sudan’s western region of Darfur.

Reconciliation. The 1994 synod “opened with the tremendous tragedy of Rwanda and ended with the miracle of Nelson Mandela’s inauguration as president of South Africa,” said Henriot. Now, says South Africa’s Cardinal Wilfrid Napier of Durban, Catholic leaders from many African countries come to South Africa for help with setting up effective justice and peace structures, looking to the example of South Africa’s recovery from apartheid.

For instance, Napier said, he and other Catholic leaders recently traveled to Burundi, which had just emerged from years of civil war, in order to help set up a truth and reconciliation commission like the South African commission that dealt with human rights abuses under apartheid. “We share stories to enable the church in other countries to strengthen our successes and eliminate our pitfalls in their own work.” Interreligious dialogue, especially between Christians and Muslims, a process essential to peace, “has improved enormously,” Napier said.