A New Way of Being Church: Pope Francis encourages us to be comfortable with uncertainty 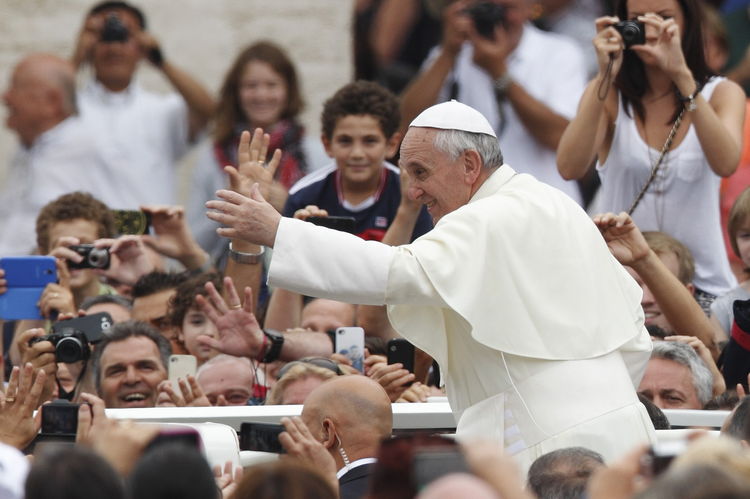 Pope Francis begins his interview with America with a reference to Caravaggio’s "The Calling of St. Matthew," an image that unlocks that which is at the heart of his life and mission. Jesus looks at Matthew, bent over his money. Francis identifies with the man: “Here, this is me, a sinner on whom the Lord has turned his gaze.” But he also sees the Christian mission as offering that healing gaze to others. He is touched by seeing how individuals live. When he addresses the question of welcoming gay people in the church, he says, “Tell me: when God looks at a gay person, does he endorse the existence of this person with love, or reject and condemn this person?” If we dare to really see people, in their dignity and humanity, then we shall discover the right words to say. Who knows where this will take us?

The interview focuses on Francis’ identity as the first Jesuit Pope. As a Dominican, I am delighted that at last the Society has one; we Dominicans have had four and since the time of Pope St. Pius V in the 16th century, the pope has even worn a form of Dominican habit! However, Pope Francis is influenced profoundly by the founders of two religious orders, Francis and Ignatius. It would have been interesting to explore the interplay of both traditions. If we are to escape narrowness, we always need several perspectives to edge us forward.

As a Jesuit, the pope gives a central place to discernment. This implies patience, taking the time to think, pray and consult. This is vital for understanding what is happening in these early days of his pontificate. People are impatient to see what he will do, but, he says, “I believe that we always need time to lay the foundations for real, effective change.... I am always wary of decisions made hastily.” This contradicts the pressure of the media to wrap people up in simple categories. Uncertainty is unbearable. We have to feel our way forward: “The Jesuit always thinks, again and again, looking toward the horizon towards which he must go, with Christ at the center.”

Pope Francis says that “the structural and organizational reforms are secondary—that is, they come afterwards. The first reform must be the attitude.” Structural change to the government of the church is vital, but it must follow from a new way of being church, in which we get out of the sacristy, engage with people, know their suffering and their puzzlement from within. At this stage, the pope is showing the way forward by what he does. He has a capacity to make expansive gestures that open up new perspectives. His first trip outside Rome was a visit to Lampedusa, where so many immigrants have died trying to enter Europe; or think of his visit to the favella in Rio de Janeiro. Christianity is a religion of sacramental gestures, the pouring of water and the breaking of bread, and his gestures are powerful in opening up the future.

This new way of being church will eventually have to find structural form. Pope Francis says: “The dicasteries of the Roman Curia are at the service of the pope and the bishops.” It has not always felt this way! Cardinal Hume said that the bishops must cease to be at the service of the pope and the Roman Curia, but rather the Curia serve the government of the pope and the bishops. This implies that the pope ceases to be a monarch, presiding over the church from a remote height, and becomes again the bishop of Rome, embedded in the college of bishops. From the moment that he stepped onto the balcony of St. Peter’s, Francis has shown that this is his intention. So this papacy could mark the most fundamental change in the governance of the church in centuries, from monarchy to collegiality. Much of Pope Emeritus Benedict’s theology of the church implied shift. Francis wishes to do it. He insists on the return to models of synodal government and on real consultation. Lay people will have a voice, as they often did in the early church. We must have patience as the form of this new structure and dynamic unfolds.

I would conclude with two profound hopes. That a way will be found to welcome divorced and remarried people back to communion. And, most important, that women will be given real authority and voice in the church. The pope expresses his desire that this may happen, but what concrete form can it take? He believes that the ordination of women to the ministerial priesthood is not possible, but decision-making in the church has become ever more closely linked to ordination in recent years. Can that bond be loosened? Let us hope that women may be ordained to the diaconate and so have a place in preaching at the Eucharist. What other ways can authority be shared?

Timothy Radcliffe, O.P., is the former master of the Dominican Order and the author of What is the Point of Being a Christian?

Show Comments (
2
)
Comments are automatically closed two weeks after an article's initial publication. See our comments policy for more.
Sara Damewood
7 years 11 months ago
Great article and I share your two profound hopes. I would love to see women deacons giving homilies, and I'd also like to see women theologians having regular conversations with the teaching church authorities.
bill halpin
7 years 11 months ago
Quote: "That a way will be found to welcome divorced and remarried people back to communion. And, most important, that women will be given real authority and voice in the church."(TR) ... These are good hopes! I'm also fond of the title phrase "Being Church" with its suggestion of a beyond-ecclesial expansion to a cosmological and ecological embrace of "Being" as "Church." (Yes, then, we all do attend church!) This loosening of bonds as a "New Way" might be looked at as a "creatio ex nihilo, in, trans, et per, omnes," i.e. "creation out of nothing, in, across, and through, all," The Cosmic Christ mystics envision would be at home here.