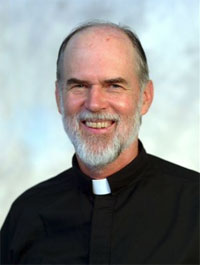 Michael Kennedy, S.J., talks about the Jesuit Restorative Justice Initiative and his work with youth in the California prison system. Father Kennedy is the author of Eyes on Jesus and Eyes on the Cross, among other books. He spoke to Associate Editor Luke Hansen, S.J., at the Los Angeles Religious Education Congress. After the interview, several juvenile inmates who Father Kennedy works with in Los Angeles wrote powerful letters to Pope Francis, thanking him for washing the feet of juvenile prisoners in Rome on Holy Thursday.

Fascinating podcast. The very notion that prisons/prisoners can be a powerful center of prayer for our culture, not unlike monastic centers, is radically hopeful in a place where there is so little hope. I love hearing about the work that Fr. Kennedy is doing with these kids who are mostly thrown away and the lepers of our time. I would love to see prisons become places for souls to heal and be returned to the community, having become healers themselves. Would also like to see prisons turned into organic farm, whereby the prisoners could physically feed their communities.

Mike does wonderful and often difficult work. It should also be said that the letters that the young people of Juvenile Hall in Los Angeles sent to Pope Francis on Holy Thursday did not go unanswered. Mike recently received a letter from the Vatican, thanking him for the letters and asking him and the kids in Juvenile Hall to pray for the Pope. It was simply, and personally, signed, "Francis".

very impressed with this work. It may one of the only thing that has a postive effect on these lifers and may also give them both worldly and afterlife salvation. This is what jesus would be doing if he walked with us today