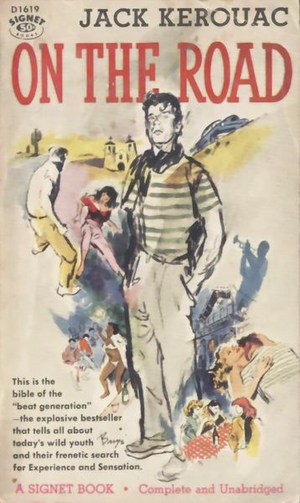 Much ink has been spilled over the past few months commemorating the 50th anniversary of Jack Kerouac's iconic novel On the Road. Among the many accolades are a few sheepish confessions by critics that they panned the book upon its release in 1957. One is reminded of Truman Capote's eviscerating take on Kerouac: That's not writing, that's typing. A few years later, Joseph Heller endured a similar broadside aimed at his new novel, Catch-22, which The New Yorker said doesn't even seem to be written; instead, it gives the impression of having been shouted onto paper. The editors of America also did not approve of Kerouac (they ignored Catch-22 altogether), sniffing that he "can yell louder than a small army of bleating Britishers and that if this book is a forerunner of a new literary generation, we may well begin to get ready for a shoal of mindless books." It wasn't the first time the editors showed their distaste for new works later ballyhooed as The Great American Novel. "F. Scott Fitzgerald's earlier books, unfortunately, ran into a large number of printings," the editors wrote in May 1925. "The Great Gatsby will probably meet with like success, despite the fact that it is an inferior novel...feeble in theme, in portraiture, and even in expression." Fitzgerald had some fine company, however, for a quarter-century later J. D. Salinger's The Catcher in the Rye was dismissed in these pages as "a story that becomes frightfully boring before one is halfway through perhaps the best thing to be said about The Catcher in the Rye is that Mr. Salinger would do well to remain in the field of the short story.