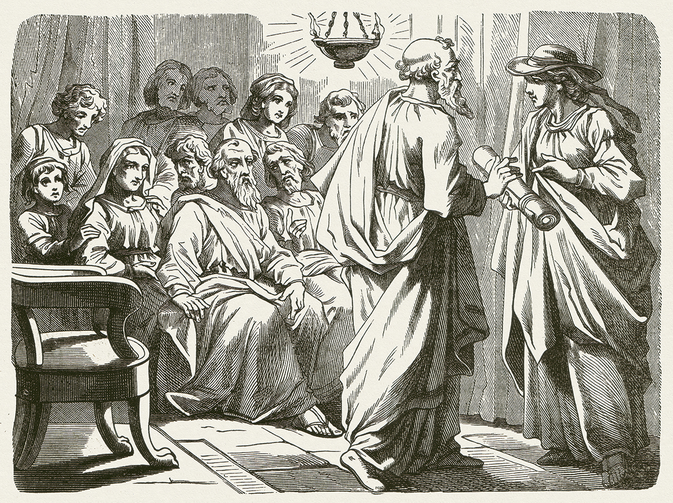 The International Theological Commission approved a study on the diaconate during its meeting in Rome from Sept. 30 to Oct. 4, 2001. The question of women deacons has been before the commission for at least 20 years. The original study on women deacons, requested by Pope Paul VI, was suppressed. While that document remains unpublished, an article published in Orientalia Christiana Periodica in 1974 by then-commission member Cipriano Vagaggini concluded that the ordination of women deacons in the early church was sacramental. What the church had done in the past, he suggested, the church may do again. One commission member explained privately that the salient points in the ongoing conversation over the years, as the document grew from 18 to 70 pages, were: 1) What did women deacons do? 2) Were women deacons ever sacramentally ordained? 3) Does the ordained diaconate share in the sacrament of order? 4) Does the ordained diaconate share in the sacrament of order in such a way that it is part of the sacerdotal priesthood?

What Did Women Deacons Do?

While the work of women deacons—always rooted in the word, the liturgy and charity—differed regionally, the fact of women deacons is undeniable. The commission recognizes that St. Paul called Phoebe a deacon (not a deaconess) of the church at Cenechrae. But the commission ignores or relegates to footnotes significant epigraphical and literary evidence. There is a scattershot approach in the document to what is known about ordained women, and a general attitude that all persons called deacon are male, even though women deacons of the early church were called by their job title.

Over 40 years ago Cardinal Jean Daniélou, a French Jesuit, noted four ministerial areas of women deacons: 1) evangelization, catechesis and spiritual direction, 2) liturgical roles equivalent to porter, acolyte, lector and deacon, 3) care of the sick, including anointing and 4) liturgical prayer. Daniélou actually argued that women sacramentally anointed the sick, citing Epiphanius: the woman deacon is delegated by the priest to perform his ministry for him. This raises a deeper question and underlies the quandary imbedded in the document: can women be given the power of holy orders?

Were Women Deacons Ever Sacramentally Ordained?

As time and practice accrued, women were ordained to the diaconate in rituals identical to those used to ordain men to the diaconate. The ordination ritual of the Apostolic Constitutions for women deacons, codified by the Councils of Nicea (325) and Chalcedon (421) begins: “O bishop, you shall lay hands on her in the presence of the presbytery.” Perhaps the oldest known complete rite of ordination for women deacons, a mid-eighth century Byzantine manuscript known as Barbarini 336, requires that women be ordained by the bishop within the sanctuary, the proximity to the altar indicating the fact of a true ordination.

[There was a] famous debate about women deacons of the 1970's and early 1980's that included [Cipriano] Vagaggini, Roger Gryson and Aimé Georges Martimort. Gryson carried out a definitive exploration of texts and concluded that women were sacramentally ordained. Martimort argued against that interpretation. It is telling how carefully the Commission follows Martimort, as well as more recent writings by a subcommittee member, Gerhard Müller.

The commission’s somewhat tortured logic in this respect—splitting and then rejoining the concept of Christ-head and Christ-servant—does not contribute to an understanding of the diaconate as a separate and permanent vocation and part of the sacrament of order. Neither does the new term in persona Christi servi reflect traditional magisterial teaching, which presents the deacon as the representative of the church.

Part of the Sacerdotal Priesthood?

As for the diaconate, the universally accepted theology of the diaconate shows the deacon acting in the name of Christ in his church, as opposed to in the person of Christ, head of the church. The document, however, does all it can to conjoin the three grades of order. The clear attempt to define the sacrament of order narrowly, at any level, as part of the (male) priesthood of Christ to which women need not apply, makes church teachings about the equality of all persons less credible. Aside from the insinuation that women cannot represent Christ, even as servant (cannot act in persona Christi servi) the commission ignores the essential weaknesses of in persona Christi theology. In fact, the humanity of Christ overcomes the limitations of gender, and no church document argues an ontological distinction among humans except documents that address the question of ordination. This view is not likely to dampen growing worldwide enthusiasm for women deacons.

The genuine question, Why not? has remained constant since Vatican II. [It] remains the mantra as more evidence of an unbroken tradition of ordaining women deacons surfaces in the churches of the East, whose apostolic succession and orders are noted in Vatican II’s “Decree on Ecumenism” (1964). Sister Hripsime, a woman deacon who was ordained by the Armenian patriarch of Constantinople and assisted in liturgies in the United States many years ago, is alive today. Further, the Greek Orthodox Church ordained monastic women deacons through the 1950's and Bartholomew, ecumenical patriarch of Constantinople, in 1996 said it is always possible to return to this ancient tradition of the church.

Both here and abroad the call for women deacons continues to intensify.

I believe that the arguments set forth in my book Holy Saturday are still valid. Men and women are ontologically equal. The church has given reasons why women, although ontologically equal to men, may not be ordained to the priesthood, but the judgment that women cannot be ordained priests does not apply to the question of whether women can be ordained deacons. Women are now called and have been called in the past to the diaconate. There are stronger arguments from Scripture, history, tradition and theology that women may be ordained deacons than that women may not be ordained deacons. Women have continually served the church in diaconal ministry, whether ordained to such service or not. The ordained ministry of service by women is necessary to the church—that is, to both the people of God and the hierarchy. As a result, the ordination of women to the diaconate is possible.

Fifteen years ago in New York City, I asked Cardinal Joseph Ratzinger the same question: Will the church return to the tradition of ordaining women deacons? He responded that it was under study. For how long?

Phyllis Zagano is the author of Women Deacons? Essays with Answers and Holy Saturday: An Argument for the Restoration of the Female Diaconate in the Catholic Church. A longer version of this essay appeared in the Feb. 17, 2003, issue of America under the title “Catholic Women Deacons.”

Show Comments (
4
)
Comments are automatically closed two weeks after an article's initial publication. See our comments policy for more.
Bruce Snowden
5 years ago
Who gets to serve? I think the whole Church, the Body of Christ whom we are, because He said, “I have come to serve … the “I” being the Baptized into Christ, “partaking of the Divine Nature” making the whole Church diaconal, as well as priestly, may I say “Magesterial” too, of necessity all ministry structurally contained and maintained, while fundamentally acknowledging that the “Spirit moves where It Wills." All of this is possible I suggest, because the Church whom we are, is Sacramental and wholly righteous. This applies only to the Church as Body of Christ, not to the Institutional Church which as we all know has not always been wholly righteous! What does it mean to be “Sacramental?” It means to be “signs” instituted by Christ to graciously share His persona as agents of Mercy and Forgiveness. May women be ordained to the Deaconate? Personally, I say yes. Were women ever Sacramentally Ordained? The Orthodox Church does it and they are one of “the two lungs” of the Church, spoken of by St. Pope JPII. Both lungs are supposed to function as one, not one denying need of the other. The latter is guaranteed to produce COPD, (Congested Obstructive Pulmonary Disorder) defined here as, Church Obstructive Practice Disorder, in need of healing. Do Deacons, obviously women too when ordained share in the Sacrament of Holy Orders? St Pope JP II said “no." Using the word "no"to female priesthood “definitively.” A question, in the womb Jesus developmentally was sexually undetermined, until the male gender became dominant. In that period of gender indecision where did the Eternal Priesthood of Jesus reside, as there were male and female potential? What then? Is the Deacon ordained with another expression of the holy order of Jesus, “Serve,” truly having a special strengthening of the connective sinew of service that connects to the whole Church to Christ? Give me wriggle room and I’ll wriggle out of the box, speculation, my middle name in Christ. Let’s pray that our Church listens diligently to the gentle coo of the Spirit Dove. In that heavenly music I’m sure you’ll hear, “Yes, Women Deacons are fine! “
Lisa Weber
5 years ago
Another aspect of the question is "Do we need women deacons?" We need women leaders who take a greater part in liturgy so that we have women preaching at Mass. If only men are allowed to preach, only a masculine interpretation of the Gospels is heard. That is like looking at a question with only one eye when two are available. We need women leaders in church. In order to lead, one has to be able to speak publicly. It is good that there is an historical precedent for women deacons, but we would need them even if there was no precedent.
William Rydberg
5 years ago
Give us a break. After 13 1/2 years, America still is unable to come up with a 360 degree Scholarly Analysis. From a reporter's perspective, taking the article and circulating same back to the experts would be something one would learn during a "101" Class. Seems that the journalistic requirements start and end in the Archive Room. I'm not impressed. Just my opinion, in Christ,
5 years ago
Reading this article and "Still Separate, Still Unequal" in the same sitting had a powerful effect on me. Most people nowadays acknowledge that African-Americans have been treated poorly, even if those same people may not agree that racism is still a problem. I believe most (young) people would agree that women have been treated as second-class citizens in our church. But I'm afraid the answer of the hierarchy to the title question is "OK ladies, you can serve, but don't get uppity and ask for any official recognition. Because if we ordain women deacons, we know you're going to ask to be ordained to the priesthood, and we want to delay that fight as long as possible."