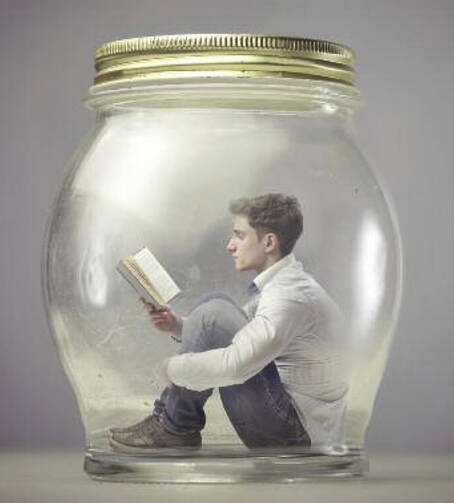 When I was a first year student at Georgetown University, a gruff, demanding English professor who would later become a treasured mentor put into my hands a book entitled The Glass Bead Game, by Hermann Hesse. The author had won a Nobel Prize in 1946 largely on the strength of this book, which the Nobel committee described as “a fantasy about a mysterious intellectual order, on the same heroic and ascetic level as that of the Jesuits.” Though there are many resonances between Hesse’s imaginative world and the Jesuit tradition, it is uncertain and probably unlikely that he personally knew any Jesuits. And while from an early age Hesse departed from the strict pietistic beliefs of his parents, who had served as Christian missionaries in India, he read widely in Eastern and Western theology and philosophy throughout his life.

Hesse’s upbringing led him to write Siddhartha (1922), a novel about a young Brahmin’s journey toward enlightenment through ascetic and epicurean practices. I had read the book as a high school student and had joked that Hesse’s prose, which veered between Buddhist detachment and German philosophical precision, was something of a cross between the Dalai Lama and a BMW. Because of those none-too-flattering memories and the book’s daunting length, The Glass Bead Game gathered dust on my college bookshelf.

When I eventually read the book, I found it to be the story of Castalia, a society within a society. In the world Hesse imagines, children who show signs of scholarly aptitude are separated from their families and sent off at a young age to this special region of the country, where they are fed, clothed, trained and allowed to pursue knowledge for its own sake. (It did not occur to me at the time, but I later discovered that more than a few commentators have compared Castalia to the Roman Catholic seminary system.) Hesse’s story focuses on the struggles of one man, Joseph Knecht, who rises through the ranks of the intellectual elite to become the Magister Ludi, master of Castalia’s most prestigious institution.

Only then does he discover to his utter dismay that the system to which he had dedicated his life and his talents was built upon foundations incapable of withstanding the challenges of the world at large. One might think that as Magister Ludi, occupant of the highest scholarly office, Knecht would have felt supremely fulfilled, enthusiastic about the intellectual projects that he and his fellow Castalians energetically pursued. But in his role as Castalia’s most visible ambassador, Knecht finds that he has few answers for the real needs of the public. His training has prepared him not for public service but for preserving the privileges and prerogatives of Castalia. He begins to wonder whether the pursuit of knowledge for its own sake is worthwhile. With doubts like these gnawing at him, he resigns his office and chooses instead the life of a simple schoolteacher in an ordinary town far away. This role feels to him more relevant, more necessary, more human.

In leaving Castalia, Knecht does not reject wholesale the academic life. Even in his lengthy letter of resignation, he employs the same vocabulary of love and devotion he used to characterize scholarly pursuits in an earlier address to his students:

Our own special mission, as you know, is the idea of the Universitas Litterarum. Ours to foster its supreme expression...by incorporating into it each new achievement, each new approach, and each new complex of problems from the scholarly disciplines. We must shape and cultivate our universality, our noble and perilous sport with the idea of unity, endowing it with such perennial freshness and loveliness, such persuasiveness and charm, that even the soberest researcher and most diligent specialist will ever and again feel its message, its temptation and allure.

In our world, Knecht’s vision of the interconnectedness of knowledge has found expression in Catholic universities. At Jesuit colleges and universities in particular, Knecht’s idea of the deep union of all reality fuses with the call of St. Ignatius Loyola for us to find God in all things. These commitments are incarnated in structures, policies and requirements that discourage students from specializing too much or narrowly focusing their energies too early. At their best, Jesuit institutions of higher education invite students to shape personal syntheses of their knowledge and their beliefs, their thoughts about the world and the actions they might take to improve it.

But the resonances between Hesse’s world and that of Jesuit colleges and universities do not end there. Hesse’s character Knecht personifies a series of classic debates about the purpose and methods of Catholic higher education, ranging from John Henry Newman’s The Idea of a University through the

Land O’Lakes statement of 1967 to a keynote address delivered by the Jesuits’ superior general, Adolfo Nicolás, in Mexico City in 2010. Many of the questions Knecht asks and that shape his discernments throughout the novel channel unconsciously and in significant ways the spirit of St. Ignatius. For Ignatius and for Knecht, two questions especially matter: To what end do we direct our work, our study, our play and our life together? How do we serve one another, our city, our world, our god or gods? It is no accident that the German word Knecht can be translated “servant.” Unlike Castalia, Jesuit colleges and universities are more than a place for mind games. At their best, they are communities radically and unreservedly committed to the proposition that ideas cannot simply be taught and learned. They must also be lived in a way that makes the world more just, more peaceful and more humane.

Yet Jesuit institutions are not immune from the sort of triumphalism that corrupted Joseph Knecht’s Castalia. As part of our practice of corporate and personal self-examination, we ought continually to ask ourselves: If disconnectedness from the concerns of the world undermined Castalia, what temptations of modern academic life must we be careful to resist?

Three temptations immediately come to mind. The first, specialization, is as dangerous for us as it was for Knecht and his Castalians. In a data-packed age, where a single iPhone can access more information than was available anywhere in the world a few centuries ago, academic specialization is necessary and inevitable. Students begin to home in on specific areas of interest and expertise in the first few semesters of college. The process accelerates as they contemplate graduate or professional studies. Yet in tension with this, the Jesuit tradition invites students and faculty members alike to seek the social significance of our specialties—to show why and how the study of medieval heretics (or penguins or Byzantine architecture) contributes to the collective knowledge of humankind and to the development of a more just society.

The second temptation, hyperintellectualism, has to do with neglect of our full humanity. Knecht’s Castalia, like the seminary system it mirrors, separated up-and-coming scholars from their parents, families and childhood friends. For our part, we are participants in an academic enterprise that is demanding not just intellectually, but emotionally, physically and spiritually. Professors, colleagues and peers expect us to do our best. And in Jesuit institutions, we have a Latin “buzzword” for the expectations we place upon ourselves and each other: magis. When work requirements are immense, perhaps even suffocating, the temptation to lose ourselves fully in the intellectual realm can be strong. But at what price? Do we adequately take account of wellness and mental health, our own and that of others? Do we cultivate supportive, loving relationships of all kinds? Do we talk and think in these terms, personally and institutionally? If not, why don’t we? There is, after all, a Latin expression for this also, a favorite of the Jesuits: mens sana in corpore sano (“a healthy mind in a healthy body”).

The third temptation, arrogance, concerns loss of humility. In the letter of resignation Knecht circulates to his colleagues, he asks whether “we have already been infected by the characteristic disease of nobility—hubris, conceit, class arrogance, self-righteousness, exploitative-ness.” In most ways, the situation of the academy in the 21st century is not nearly so dire. Still, we should reflect upon the ways in which academic life can isolate us from the realities of the world and sometimes make it seem that we can transcend them. Something as current as the Occupy protests, for example, can call us to a deeper collective awareness of the social and economic inequalities we so easily can take for granted.

Thus it is right that Jesuit colleges and universities strive to form in students what the former Jesuit superior general Peter-Hans Kolvenbach called “a well-educated solidarity.” That kind of solidarity requires the cultivation of a solid internal foundation, a deep self-knowledge and self-acceptance that can keep a person grounded despite life’s ups and downs.

Just as Joseph Knecht, that servant of Hesse’s intellectual universe, paused at the pinnacle of his professional achievements to examine critically his values and commitments, so also does the Ignatian tradition ask us never to stop questioning, never to stop asking how we are contributing to the ongoing work of using our knowledge to build up a world of peace and justice for people today and in the future. Our determination to ask these questions and to put into practice Ignatius’ invitation to seek God in all things can keep Jesuit education vibrant and relevant now and in centuries to come.

J. Patrick Hornbeck II is an assistant professor of theology and medieval studies at Fordham University in New York.