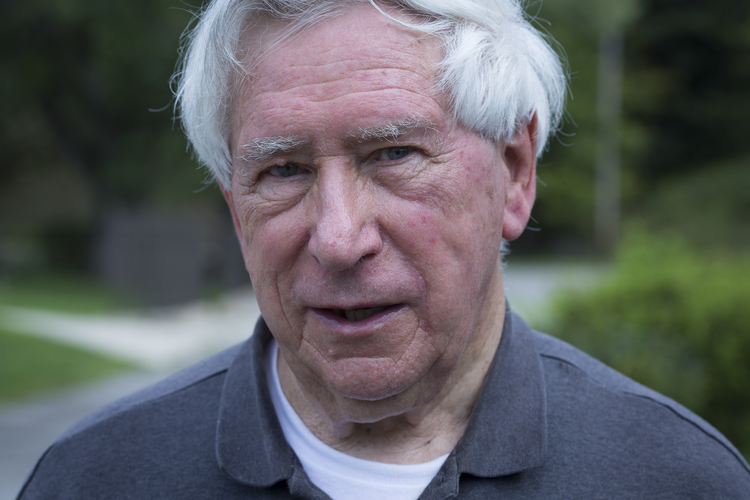 There's a twinkle in the eye of Jesuit Father Albert Fritsch as he looks at the small orchard of plum and apple trees on the grassy field that runs between his home and St. Elizabeth Church, where he has served as pastor for the past 10 years. The trees are not large and it will be at least a few more years before their harvest is something to brag about. But by starting an orchard, Father Fritsch is showing his parishioners the importance of appreciating what nature can share.

"We're creating our own forest here," he said. "We're trying to put different things here. We'd like to get it down to where you don't have to mow the yard so much. And we're wanting to put an herb garden in. We just haven't gotten around to it yet."

If that's not enough, he also grows much of his own food. Father Fritsch, who turns 81 Sept. 30, sees nature as a gift to value and protect so that it continues to give life. A Kentucky native who grew up on a farm outside of Maysville near the Ohio River, the Jesuit with a shock of white hair has spent a lifetime immersed in nature. His love of the earth has led him to become an outspoken environmental advocate. He's known for promoting sustainability and simple living and posing hard questions about corporate actions that maximize profit to the detriment of the earth's resources.

He calls his ministry Earth Healing. From a website—www.earthhealing.org—to occasional public appearances and a series of books connecting spirituality and social change, Father Fritsch has tapped his Appalachian roots to share his belief that "to be poor is to be noble and called to make radical change."

"I was never a capitalist in my life," he told Catholic News Service in the dining room of the parish rectory overlooking the orchard. "I always despised people who were getting large amounts of money and I always thought the money always belonged to all the people and the natural resources. Even from the earliest time I could not believe that people could sequester and take in huge amounts (of money) and others could not have much of anything."

Father Fritsch's website offers daily reflections on creation and commentary on issues of the day. He claimed the site has gotten more than 1 million hits a month over the past year.

Illustrating his commitment to living simply, Father Fritsch lives on $3 to $4 a day, the same as the typical food stamp recipient.

His path has taken him to Cincinnati, New York, Chicago, Austin, Texas, Washington and back home to Kentucky. He said each stop brought him closer to understanding the importance of respecting the earth. He also said he came to realize that protecting the environment involved more than pointing to ill-advised corporate practices but also the need for individuals to change their hearts and minds.

It was as a student at Jesuit-run Xavier University in Cincinnati that he was impressed with the work of several priests and recalled thinking "that could be a life for me too." He was ordained in 1967.

A chemist by training, Father Fritsch learned from his parents to carefully use, and reuse, materials form the earth. There was little waste on the family farm.

"I was interested in [the environment] because I was taught that. There was no trash that went out. Everything was recycled. We were builders too. We would smash the glass and put it into the concrete that we would have. We didn't believe that there was such a thing as a place to send your materials," he said.

After post-doctoral studies in 1970, he worked as a science consultant at the Center for Study of Responsive Law alongside Ralph Nader in Washington for a year and then as co-director of the Center for Science in the Public Interest from 1971 to 1977. But Appalachia called. He said he realized that Washington, with its excess, was not the best place to promote simplicity. At the time, surface mining was ramping up to extract coal. So Father Fritsch returned home to, he said, help heal the countryside and ease the effects of rampant poverty.

"I'm the fifth generation, on my mother's side, of Appalachians," he said. "I do feel it's our land. Not just they, but us. It struck me. We are bedridden, we have problems. When somebody is ill you go back to them."

Father Fritsch started Appalachia-Science in the Public Interest in Mount Vernon, 50 miles south of Lexington. He and a small staff taught people about creating healthy land and building sustainable communities. Programs welcomed adults and children alike. He coordinated research and set up demonstration projects to reconnect people with nature.

Like the cordwood house with the composting toilet and rain barrels that collect water for daily usage.

Jesuit Father Jack Kieffer, 79, has lived in the house near Livingston, Kentucky, for years. A former chemical engineer, he volunteers at the Appalachia-Science organization and shares ideas with visitors on how to include native herbs and plants in their diet and grow their own food. He admitted that getting people to change habits is difficult.

"We try to show people how to live more simply," he told CNS. "That requires not so many fancy gadgets."

Father Fritsch left the Mount Vernon center in 2002 after 25 years, deciding it was time for others to take the reins of the organization. The organization's ongoing projects include a wilderness demonstration site—the Mary E. Fritsch Nature Center, named for Father Fritsch's mother—where students can learn about native plants and animals. A-SPI offers resources on solar technology and simple living and houses a well-stocked library on environmental topics.

Suzanne Van Etten has been Appalachia-Science in the Public Interest's executive director since 2012. She said much of the organization's effort is expanding into renewable energy, including do-it-yourself solar power projects. It also has helped develop a training program at a local community college to prepare students to install solar energy systems.

"We are working with the next generation, introducing them to these things," she said.

Father Fritsch continues in a pastoral role as well. In addition to pastoring St. Elizabeth Church, he is sacramental minister at Our Lady of the Mountains Parish in Stanton. The parishes are small -- about 50 families each -- allowing him to spend half-time in ministry and half-time with his passion for the environment. His Sunday homilies regularly incorporate environmental and economic justice themes. He often cites Pope Benedict XVI and Pope Francis voicing similar concerns.

His challenging words leave some worshippers uncomfortable. Occasionally a visiting Mass goer walks out, but never a parishioner, he said. Still, he plans to stay on his path as long as his health remains good and the fire in his heart burns.

"We are socially addicted to what our culture is," he said. "I've said in a pastoral way that you have to turn to God because only in God can we find our answer."

For more: See a related video. Information about Appalachia-Science in the Public Interest is online at www.appalachia-spi.org.