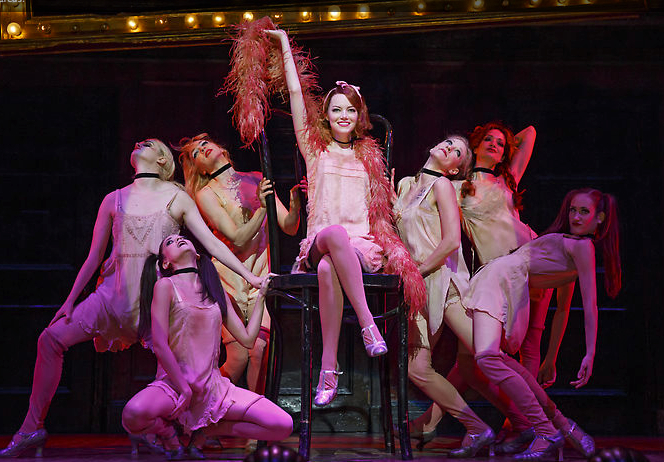 A show that skewers show business strikes a slippery bargain with its audience, and it can backfire. While we may smile knowingly at its insights into backstage chicanery and producerial cynicism, and enjoy its winking parodies of other, implicitly lesser shows, a piece of entertainment intended to make us think critically about the value of entertainment itself risks having its own judgments turned back on itself. If we’re meant to see, after all, that the people who make theatre are just out to turn a quick buck by selling cheap thrills to gullible audiences, then who are we, and how is the show we’re watching not just another scam?

It gets more complicated, and the stakes are much higher, when the critique is more ambitious. The point of the great, troubling musical Cabaret is not just that show business is craven and corrupt but that it signifies a deeper social corrosion—that all too many of us would prefer to fiddle while Rome burns, or, to be more specific, to party while the Nazi Party takes over. The Roundabout Theatre’s current rerun of its hit 1998 revival is a smart, slick contraption that drives that point home, to a fault. “There was a city called Berlin in a country called Germany. It was the end of the world, and I was dancing with Sally Bowles, and we were both fast asleep,” recalls Cliff Bradshaw (Bill Heck), the callow American writer who gets caught up in the whirl of the city’s seedy nightlife, and who elsewhere compares the scene to “a bunch of kids playing in their room, getting wilder and wilder, and knowing any minute their parents are going to come home.”

Indeed, though the center of the show is supposed to be the fluttering chanteuse Sally Bowles, played compellingly if jaggedly by Emma Stone, it is Fraulein Schneider who emerges as the show’s true conscience (it doesn’t hurt that the grounded, unsentimental Emond is giving the performance of a lifetime). It is Schneider who, early on, has the ostensibly benign welcoming waltz “So What?,” in which she shrugs off the poverty of a new tenant because she has few other offers. Her nonchalance about her fate—“It’ll all go on if we’re here or not/ So who cares, so what?”—may sound like I’ve-seen-it-all wisdom. Instead it’s setting the tone for a world where nothing has any real value, only a price.

In a show with no shortage of haunting moments, perhaps the most quietly devastating comes when Schneider is wooed by a courtly grocer, Herr Schultz (Danny Burstein). He gently extols the virtues of marriage in song, and she is moved; as they get up to dance, the tune is taken up by the blonde prostitute who lives next door, singing in heartbroken German under moonlight-blue nightclub lighting as Cumming’s spidery emcee looks on. This new couple’s feelings may be sincere, but this overlay reminds us of the illusory, transactional world in which they live. How can love survive in a bordello?

It gets worse: Schultz is Jewish and Schneider not; their unhappy ending is foreordained. As the Nazi shadow advances, “Cabaret” is in danger of receding into history; the moral shorthand for ultimate evil that the swastika too easily represents can distance us from the complicity in which the show has artfully entangled us. After all, we’re enjoying a show with ticket prices north of $150, drinking $19 cocktails at cabaret tables that place us in a nightclub much like the fictional Kit Kat Club (and in the former Studio 54, no less); we’re encouraged to leer at the exposed flesh and snicker at Cumming’s explicit provocations. But hey, at least we’re not in bed with Nazis! I can’t say for sure if director Sam Mendes’s production actually encourages this sort of dismissive stance; we hardly need to be reminded of the Senate torture report, or the Ferguson grand jury, or the immiseration of immigrants and the poor, to conjure parallel injustices in our own time and place. But it’s unsettling to think that “Cabaret,” as sharp a takedown of complacency and decadence in the face of encroaching evil as has ever been written, may itself have become a kind of bread-and-circuses diversion.

Some critics have seen parallels to “Cabaret” in the current Broadway revival of Side Show. This cult musical about the real-life Hilton sisters, conjoined twins who enjoyed a brief career as a novelty act in vaudeville, also has a grinning emcee (Robert Joy) who invites us in the opening number to “look at the freaks.” In director/adaptor Bill Condon’s expert production, said freaks are outfitted in seamlessly authentic costumes, from a bearded lady to a lizard man, and the actors playing the Hilton sisters, Erin Davie and Emily Padgett, are attached at the hip by unseen magnets.

But this is a more conventional, rise-and-fall showbiz fable than “Cabaret,” as the sisters trade one exploitive impresario for another, a slick young cad (Ryan Silverman). The show’s central image—of two distinct individuals inseparably, tragically joined as one—isn’t just its strongest element, it’s pretty much the whole show. Though Condon has tightened and strengthened the script, it remains essentially a series of variations on the theme of split identity. Visually, this never loses its fascination, as Padgett and Davie dance delicately in tandem, or strain palpably at each other’s limits when they’re at odds offstage. Just to watch them descend stairs or sit down together is to marvel at their hard-won poise.

The show also relentlessly returns to the awkward subject of romance, treating the question of how exactly that might “work” with varying degrees of sensitivity and playful prurience. “Side Show” does not shrink from any chance to wring emotional conflict from this conundrum—which is another way to say that its bathetic score, by Bill Russell and Henry Krieger, lays the power ballads on pretty thick. There’s a kind of loud Broadway belting that has earned the semi-affectionate label “park and bark,” and apart from a few nimble vaudeville pastiches, “Side Show” is a quintessential park-and-bark property. That has earned the show, which originally debuted briefly on Broadway in 1995, a cadre of rabid fans, though not enough to keep the show open; it will close at the St. James Theatre on Jan. 4, after only 77 performances. I can’t say that it would run longer if it were a more challenging show—if it dared to ask us, as “Cabaret” does, to consider how our taste for diversion may make us complicit in, or blind to, oppressive social forces—but it would certainly make “Side Show” more than, well, a side show.