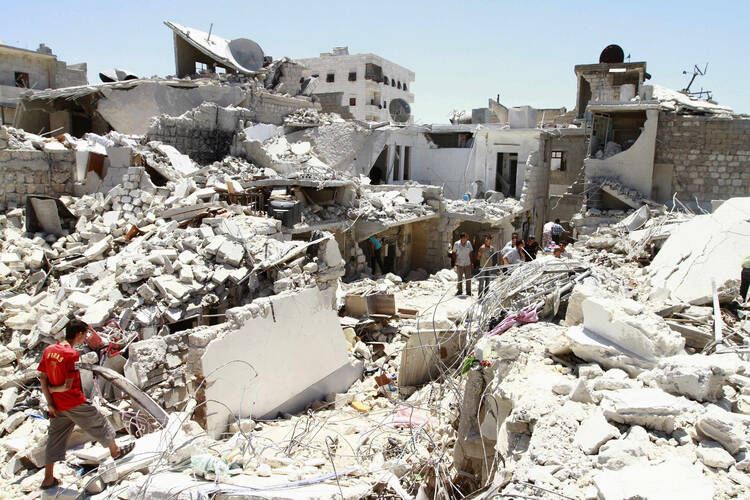 The war in Syria is like a factory churning out nothing but death, destruction and suffering, said Archbishop Mario Zenari, Vatican nuncio to Syria. Even though the Vatican was unable to confirm on July 30 news reports that a Jesuit priest had been kidnapped in Syria, the nuncio said hundreds of innocent people there find themselves abducted for political leverage or economic extortion.

Kidnappings in Syria represent "a very, very painful wound that deeply harms the nation and the Syrian people," he said. Italian Jesuit Father Paolo Dall'Oglio, 59, who had spent more than 30 years promoting Muslim-Christian dialogue in Syria, was reportedly missing. News reports said acquaintances had been unable to reach him by phone, and Reuters reported that militants with links to al-Qaida kidnapped the priest July 29 while he was walking in the northern Syrian city of al-Raqqah.

Archbishop Zenari said in an interview with Vatican Radio on July 30 that sometimes the priest would inform him of his whereabouts, but that this time he had heard nothing. "First of all, I'd want to know if he really was in Syria the last few days, and then I would wait to have information that was more definitive," he said.

The Jesuit province in Italy told the Vatican press hall it was unable to confirm whether Father Dall'Oglio had been kidnapped. "It's too soon to say," Passionist Father Ciro Benedettini, vice director of the press hall, told journalists on July 30. The Italian Ministry of Foreign Affairs was looking into the matter, he added.

Father Dall'Oglio was well-known and very well-respected in Syria, even though he may have held "positions that not everyone shared," Archbishop Zenari said.

Twenty years ago, Father Dall'Oglio turned a dilapidated sixth-century monastery in the desert of western Syria into a center for Muslim-Christian interfaith dialogue; it was staffed by Catholic and Orthodox nuns and priests. "He is truly a man of virtue, a Jesuit of great talent and a person who loves Syria," Archbishop Zenari said.

The archbishop said the latest U.N. figures estimate the two-year civil war creates some 5,000 victims a month, and about 6,000 people flee the country every day. Those unable to leave face skyrocketing prices, unemployment and continued suffering, he said. The conflict, "besides bringing death and destruction, has truly become a manufacturing plant of countless miseries," he said. He urged the world's nations to help end "this infernal cycle" of violence, kidnappings and casualties.