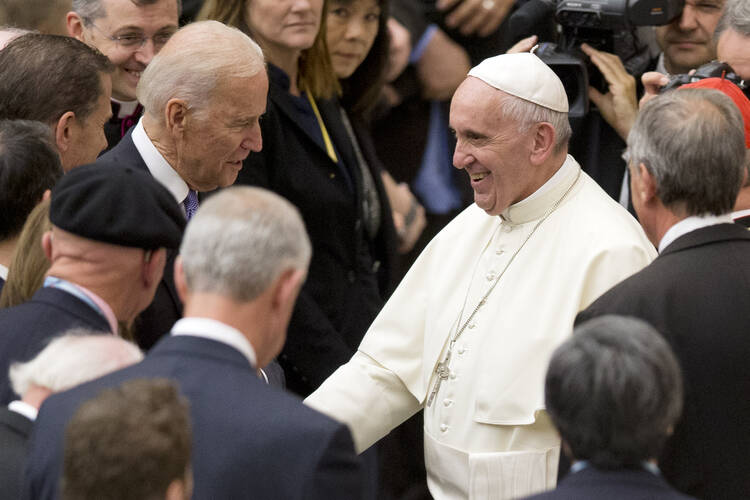 When Vice President Joe Biden is honored next month at the University of Notre Dame, the icon of Catholic higher education in the U.S., he will arrive amid sharp criticisms over his appearance.

Even the local bishop in Indiana said the university is “wrong” to give a platform to a Catholic politician who supports abortion rights and gay marriage.

But it may be a sign of the shifting dynamics in the Catholic Church that Biden was welcomed on April 29 to the Vatican to address a church-sponsored conference on cutting-edge therapies to treat diseases such as cancer, and he was warmly greeted by the local bishop of Rome, aka Pope Francis.

Biden in turn praised the pontiff, and noted that the pope met with him and his family during Francis’ visit to the U.S. last September and “provided us with more comfort” after the death of Biden’s son Beau, who succumbed to brain cancer nearly a year ago.

And while the conference’s themes—stem cell research and “regenerative medicine”—dealt with a host of delicate ethical issues that held the potential for controversy, the two leaders in their respective speeches focused on better access to the best treatments for all people, regardless of economic status.

Promising new treatments that are emerging every year cannot be available “only to the privileged and the powerful,” Biden told some of the 350 top cell therapy doctors, researchers, philanthropists, ethicists and activists who gathered in a huge Vatican audience hall.

Among the bold face names at Friday’s event and the three-day conference, which focuses on cell therapy techniques, were TV personality Katie Couric, whose husband died of colon cancer, as well as digital mogul Sean Parker and U2 rock band guitarist The Edge—also known as David Evans—whose daughter battled leukemia.

In the wake of Beau Biden’s death, President Obama tapped his vice-president to lead a new U.S. “Cancer Moonshot Initiative” aimed at finding cures and treatments for the various forms of the disease, and Biden’s personal passion emerged during his talk.

Arguing that cancer is a scourge with no boundaries, Biden called for a global commitment to fund cancer research that benefits everyone, not just the "privileged and powerful."

Biden used his appearance at a Vatican conference on regenerative medicine to urge philanthropists, corporations and governments to increase funding and information-sharing in a bid to "end cancer as we know it." He said the world is on the cusp of unprecedented breakthroughs but said the world still has not done enough.

He called for far greater international coordination on cancer research and data-sharing to promote breakthroughs and get the information to doctors and patients. “Treatments have to be affordable,” he said, and research should not be held behind paywalls and in laboratories while people suffer.

“Why do you wait?” Biden asked, his voice rising and reflecting a common frustration over the slow pace in pushing out new of research. “What is the rationale?”

In a similar vein, Francis followed Biden’s talk by stressing the importance of “access to care.”

The pontiff said the world needs to oppose “an economy of exclusion and inequality, one that he said “victimizes people when the mechanism of profit prevails over the value of human life.” The pope called for ensuring all have access to cancer care, stressing the need to combat a system that prioritizes profits over human life.

"Research, whether in academia and industry, requires unwavering attention to moral issues if it is to be an instrument which safeguards human life and the dignity of the person," the pope said.

Before taking the stage, the pope greeted Biden privately in a room backstage, where the two exchanged small tokens, the White House said. The two were also seen smiling and chatting together as they greeted conference attendees after their speeches, joined by the vice president's surviving son, Hunter Biden, and son-in-law Howard Krein, a physician who's been involved in Biden's cancer push.

The pope's focus on helping the less fortunate and the health of the planet have been welcomed by Biden and President Barack Obama, who have made common cause with the pontiff on climate change, rapprochement with Cuba and the refugee crisis.

While at the Vatican, Biden met with Cardinal Pietro Parolin, the Vatican secretary of state, at the gold-adorned Treaty Room of the Apostolic Palace. Then he left Vatican City for Palazzo Chigi, the Italian premier office in Rome, where a military band and honor guard greeted Biden and Premier Matteo Renzi by playing the American and Italian national anthems.

The two held a private meeting before Biden was to return to Washington.

The vice president traveled here from Iraq, where he paid a surprise visit Thursday to meet with Iraqi leaders about their political crisis and the campaign against the Islamic State group.

by David Gibson (RNS) with AP content: Copyright 2016 The Associated Press. All rights reserved. This material may not be published, broadcast, rewritten or redistributed.

David Gibson - Religion News Service
Show Comments (
1
)
Comments are automatically closed two weeks after an article's initial publication. See our comments policy for more.
Chuck Kotlarz
6 years 9 months ago
"...the local bishop in Indiana said Notre Dame is “wrong” to give a platform to a Catholic politician who supports abortion rights and gay marriage." The Pope's meeting of Biden perhaps is well founded. Divorce rates (number of people per 1,000 that undergo a divorce each year) run over 4.5 in several states less “open” to marriage equality. Divorce rates drop below three in numerous states more “open” to marriage equality. (http://politicsthatwork.com/graphs/marriage-equality-divorce)