Vatican Distances Itself from Commission Member's Saunders Comments on Pell 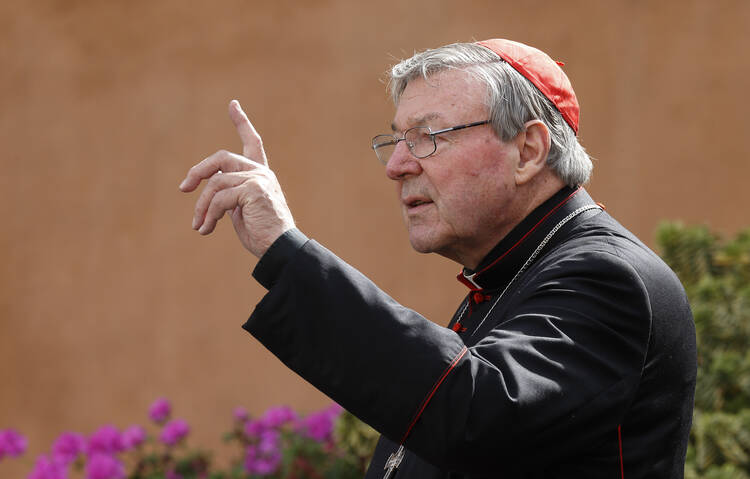 The views and opinions of a member of the Pontifical Commission for the Protection of Minors who criticized Australian Cardinal George Pell on an Australian television program do not reflect the opinion of the commission nor its role, the Vatican spokesman said.

The commission "does not have the task of investigating and pronouncing judgment on individual cases," said Jesuit Father Federico Lombardi, the Vatican spokesman. Investigations are carried out by the Congregation for the Doctrine of the Faith.

Commission member Peter Saunders, a British survivor of sexual abuse and co-founder of the National Association for People Abused in Childhood, appeared in a "60 Minutes" segment broadcast May 31 by Australia's Channel Nine.

Asked about Cardinal Pell and the way he handled allegations about abusive priests, Saunders said, "I personally think his position is untenable, because he has now a catalogue of denials, he has a catalogue of denigrating people, of acting with callousness, cold heartedness, almost sociopathic I would go so far as to say, this lack of care."

Father Lombardi, in a statement June 1, said Saunders spoke for himself and "not in the name of the commission," which Pope Francis instituted to help the church develop better policies and procedures for protecting minors and providing them with pastoral care.

The "60 Minutes" segment focused on the ongoing government hearings about clerical sexual abuse in the Diocese of Ballarat, Australia, the diocese in which Cardinal Pell was born and where he ministered until being named an auxiliary bishop of Melbourne in 1987.

The Australian government's Royal Commission Into Institutional Responses to Child Sexual Abuse began its Ballarat hearings May 19. In a statement June 1, the commission said: "The chair has received a letter from Cardinal Pell indicating that he is prepared to come to Australia to give evidence. The Royal Commission will ask him to give evidence in the second of the Ballarat hearings." The dates have not been announced.

A statement from Cardinal Pell's spokesman May 31 said the cardinal "has been informed of the contents of the 60 Minutes program this evening. The false and misleading claims made against His Eminence are outrageous."

"Cardinal Pell has never met Mr. Saunders, who seems to have formed his strong opinions without ever having spoken to His Eminence," the statement said. "In light of all of the available material, including evidence from the cardinal under oath, there is no excuse for broadcasting incorrect and prejudicial material.

"In the circumstances," the statement said, "the cardinal is left no alternative but to consult with his legal advisers."

Prior to the broadcast, but after Channel Nine released promotional material, the cardinal's spokesman issued a statement saying, "Cardinal Pell knows of the important work Mr. Saunders has done as a survivor of abuse to assist victims, including the establishment of a victims survivors group in the United Kingdom and more recently serving as member of the Pontifical Commission for the Protection of Minors established by the Holy Father to develop policy to achieve this."

However, the statement said, "it seems clear Mr. Saunders is not well informed about the claims made against Cardinal Pell in the Ballarat hearings of the Royal Commission and the fact that no new material emerged during recent hearings."

Gerald Ridsdale was a Ballarat priest whom Australian media describe as the country's "most notorious pedophile priest." Convicted of abusing more than 50 children, the former priest is in prison.

His victims included his nephew, David Ridsdale, who told the Royal Commission that he informed then-Bishop Pell of the abuse in 1993 and that the bishop responded by asking what the nephew would want in exchange for his silence.

In a statement May 20, after David Ridsdale testified, Cardinal Pell said, "I was and remain extremely sympathetic to David Ridsdale, who because of his uncle suffered horrible abuse.

"I continue to regret the misunderstanding between us. At no time did I attempt to bribe David Ridsdale or his family or offer any financial inducements for him to be silent," the cardinal said. "At the time of our discussion the police were already aware of allegations against Gerald Ridsdale and were investigating. Then, and now, I supported these police investigations. I have previously made a sworn denial of these allegations and I reiterate that denial."

Father Lombardi, commenting June 1, told reporters the statements of the cardinal, who is now prefect of the Vatican Secretariat for the Economy, "must be considered reliable and deserving of respect and attention."

Cindy Wooden - Catholic News Service
@Cindy_Wooden
Show Comments (
1
)
Comments are automatically closed two weeks after an article's initial publication. See our comments policy for more.
Tim O'Leary
7 years 8 months ago
What a mess! And not the "mess" the Holy Father was hoping for. I can see no alternative but to have Peter Saunders removed from the Pontifical Commission, at least until the Australian Royal Commission completes its investigation (Cardinal Pell has agreed to travel back to Australia to testify at the ongoing hearing). Of course, a past history of sexual abuse is no guarantee of fairness and justice for a fellow Catholic and is certainly no excuse for slander of this caliber. He said of Pope Francis: "Let's give the process a chance" but he is doing the opposite. I have tried to find out the full account of Peter Saunders' abuse to understand where he is coming from, but it is hard to find out any hard evidence: In interviews, he says he was abused by a family member for years, then 2 different Jesuits at a Jesuit school, then another lay teacher at another school. This has been repeated without any question in many places. But, have any of these alleged abusers been publicly identified by Saunders or charged or convicted by the police? Saunders should surely want them brought to justice first, before going after people where he is far removed from the evidence? All I can about abuse in New Malden is this very recent and alarming report from the police (called Operation Hydrant). There are 1,400 suspects, include 135 figures from TV, film or radio, 76 politicians involved in both local and national politics, 43 from the music industry and seven from the sporting world.The article says there were 116,000 reports of child sexual abuse in the UK this year (52,446 of abuse years past). : http://www.theguardian.com/uk-news/2015/may/20/1400-suspects-operation-hydrant-politician-and-celebrity-child-sex-abuse-inquiry