U.S. Chaldeans Decry 'Genocide' of Iraqi Christians: A rally for aid in Detroit

U.S. Chaldeans Decry 'Genocide' of Iraqi Christians: A rally for aid in Detroit 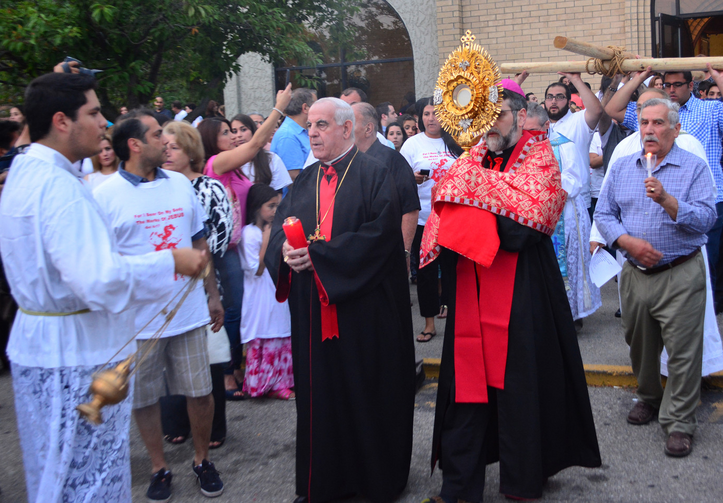 Shouting slogans such as "Obama, Obama, where are you? Iraqi Christians need you!" and "Stop the violence in Iraq!" about 150 protesters marched through the streets of downtown Detroit on Aug. 1 to call awareness to the violent persecution of Christians in their native land.

Later in the day, nearly 1,000 more gathered at Mother of God Chaldean Catholic Church in Southfield for a prayer vigil led by Chaldean Bishop Francis Kalabat, who shared a similar message.

Most of the protesters were Chaldeans, or Christians of Iraqi descent, and were there because of what many called ignorance on the part of the media and others in responding to the humanitarian crisis.

"Christians are being kicked away from their country, and no one is protecting them," said Noor Mattr, one of the protesters who helped coordinate the rally in downtown Detroit. "Christians do not take up arms like other groups, so they take action with their feet and just leave."

Mattr said his grandmother lived in Mosul, Iraq, where Christians have recently been forced to flee their homes after the militant Islamic State has given an ultimatum: Convert to Islam, pay a huge tax or be killed.

The Islamic State, or ISIS, proclaimed the creation of a new "caliphate," or state run by a religious leader, after thousands of militants seized control of large parts of eastern Syria and northern and central Iraq in June.

Since then, militants have released videos on Facebook and other social media showing mass executions of Christians and other Iraqis. According to some estimates, as many as 1,500 people were killed in July.

Ashor Khairon, another protester in Detroit, called the situation "genocide" and expressed frustration at the lack of action on the part of the U.S. and international community.

"We're praying, but the prayers aren't enough," Khairon told The Michigan Catholic, newspaper of the Detroit Archdiocese. "We need support from all over the world, especially the U.S.A. I'm sure they can do it. I don't know what they're waiting for."

Many of the protesters carried signs or wore shirts depicting the Arabic letter that is painted by militants on the houses of Christians to mean "Nassara," or "Nazarene," to identify those targeted for persecution. The symbol also has taken off on social media as a sign of solidarity with those who are being martyred.

A protester who identified herself as Nidal, but didn't want to give her last name, said the sight of people being slaughtered in online videos should be enough to cry for support, but few have taken notice.

"I have never seen so much gore. This war is right on Facebook. Every single day there are mass killings of innocent people as the world watches," she said. "This is worse than Hitler because people are just standing on the sidelines. The Obama administration hasn't done anything."

Nidal said refugees have been told to seek asylum and aid from churches and priests in Iraq, but not even churches are being spared the violence.

Janelle Rabban, a first-generation U.S.-born Chaldean Catholic who attended the rally, said it was "heart-wrenching" to listen to the stories of her homeland.

"People have to carry their kids on their back to walk 40 miles in 115 degree weather just to live. The elderly are staying home because they can't make it, and ISIS is saying, 'Either you convert or you die,' and I've heard that some of them have," Rabban said.

Rabban said prayer is critical for Christians in Iraq, who still speak the language of Jesus.

"Action does say something, but prayer speaks louder. Pray until something happens; that's what we've been taught. Jesus said, 'You will be persecuted more than I will, but I will be with you,'" she said.

Mattr said knowing churches and Christian communities around the world are praying gives refugees a shimmer of hope.

"When these people run away, they really believe that nobody else is thinking about them, so when they hear about churches and other groups praying for them, it at least boosts their morale," he said.

"But right now, we need not just that," Mattr added. "We really need actions, and we need money to help these people stay alive."

Mattr said rally organizers were selling shirts with the Arabic symbol for "Nazarene" and collecting donations to buy generators, food, tents, medicine and other essentials for refugees. Other organizations, including the Assyrian Aid Society of America and Adopt a Refugee Family, are also collecting donations.

In late July, Detroit Archbishop Allen H. Vigneron renewed his plea for Catholics in the archdiocese to pray for peace in Iraq.

"The Catholic community in the Archdiocese of Detroit offers its ardent prayers for all those suffering the effects of violence in Iraq, including those Christians being persecuted for their faith," Archbishop Vigneron said. "With a unified voice we pray that the power of good may overcome the threat of evil. May St. Mary, the Mother of God, intercede for our brothers and sisters in Iraq, and offer a model of peace for all people."