Skip to main content
Signs Of the Times
April 21, 2014 issue 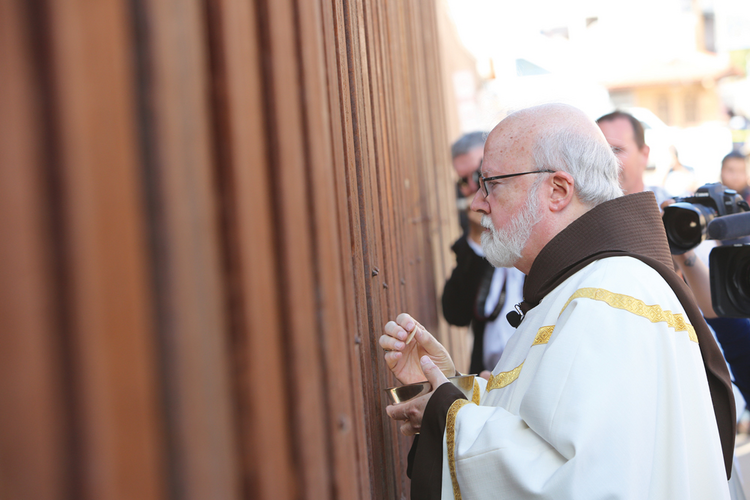 While comprehensive immigration reform remains stalled in Congress, members of the U.S. Conference of Catholic Bishops joined residents, migrants and advocates from both sides of the U.S./Mexico border in Nogales, Ariz., on April 1. There they celebrated Mass together, remembering thousands of migrants who have perished in the deserts of the U.S. Southwest, which one bishop described as “our Lampedusa.” This “Mission for Migrants” was inspired by the trip of Pope Francis to Lampedusa, Italy, last year to pray for migrants who died attempting to reach Europe by boat.

“As a moral matter, our nation can no longer employ an immigration system that divides families and denies basic due process protections to our fellow human beings,” said Bishop Eusebio Elizondo, auxiliary bishop of Seattle and chairman of the U.S.C.C.B.’s Committee on Migration.

During his homily at the border, Cardinal Seán P. O’Malley, O.F.M.Cap., of Boston said: “Here in the desert of Arizona, we come to mourn the countless immigrants who risk their lives at the hands of [human traffickers] and the forces of nature to come to the United States. Every year 400 bodies are found here at the border, bodies of men, women and children seeking to enter the United States. Those are only the bodies that are found. As the border crossings become more difficult, people take greater risks and more are perishing.”

Recalling the “hardships and humiliations of so many immigrants who come to the States fleeing from poverty and oppression, seeking a better life for their children,” he said, “Sadly enough, many immigrants spend years without the opportunity to see their loved ones.”

In a teleconference sponsored by immigration reform advocates on April 4, Kevin Appleby, director of migration and public affairs for the bishops’ conference, said the border events underlined the urgency of dealing with the humanitarian costs of the immigration situation.

“We went to [the border] to raise the human issue, the moral issue,” said Appleby. “We always talk about the economic, social and legal issues, but in the end, this is about 11 million human beings living in the shadows.

“Immigration laws should protect human rights, not undermine them,” he added.

Representative Luis V. Gutiérrez, Democrat of Illinois, the most vocal congressional advocate for comprehensive reform, said during the teleconference that he is optimistic that legislation can pass in the House before Congress recesses for the summer. If it does not, he said, President Obama has the legal authority to ease the threat of deportation for millions of people by executive order.

At the border, which separates the civic “twins” of Nogales, Mexico, from Nogales, Ariz., Cardinal O’Malley noted that the day’s Gospel “begins with a certain lawyer who is trying to test Jesus,” demanding to know, “Who is my neighbor?” Jesus responds with the parable of the good Samaritan. “In Jesus’ day the term ‘good Samaritan’ was never used by the chosen people,” the cardinal said. “The Samaritans were the despised foreigners, heretics and outcasts. Yet Jesus shows us how that foreigner, that Samaritan, becomes the protagonist, the hero who saves one of the native sons who is rescued not by his fellow countryman and coreligionists but by a stranger, an alien, a Samaritan.

“‘Who is my neighbor?’ Jesus changed the question from one of legal obligation (who deserves my love) to one of gift giving (to whom can I show myself a neighbor), and of this the despised Samaritan is the moral exemplar.”

Show Comments (
1
)
Comments are automatically closed two weeks after an article's initial publication. See our comments policy for more.
Thomas Farrelly
6 years 6 months ago
One wonders whether there were any Mexican government officials present, and whether they acknowledged their responsibility to provide jobs and opportunity for their citizens. Or do they simply wash their hands of the problems and happily encourage their poor to head for the US?

This article also appeared in print, under the headline “U.S. Bishops at Mexico Border Push Mercy for Migrants,” in the April 21, 2014, issue.