The Unspeakable: The Boston Marathon and the beginning of Christian hope

The Unspeakable: The Boston Marathon and the beginning of Christian hope 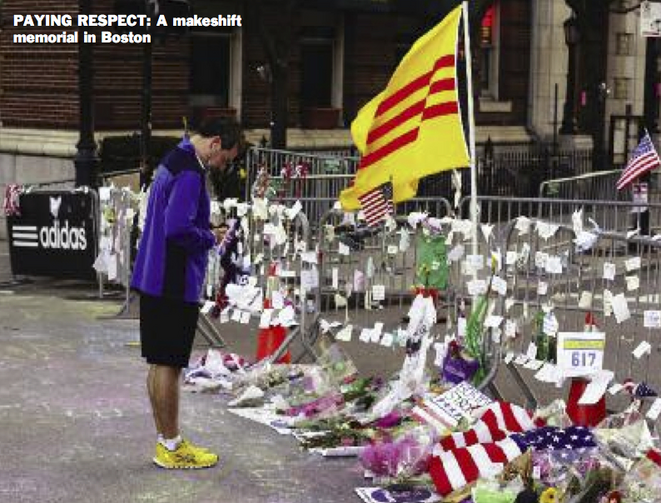 There some events we encounter in life for which there is simply no language to describe adequately our experience or words capable of consoling the afflicted. The events last month at the finish line of the Boston Marathon and the siege of the city four days later might rightly fall into this category. Images of the explosions, biographies of the victims and interviews with the witnesses circulated through cyberspace, on television and in print with hypnotizing rapidity and emotion-dulling saturation, only increasing the overwhelming experience of those days. As a resident of Boston, my memory of that week in April will forever be marked by the surreal nature of a scene that seemed closer to an action movie than to the reality playing out in my backyard.

In the initial silence of that Monday afternoon, as confusion ensued and victims were treated, I thought of the renowned
spiritual writer, social activist and Trappist monk, Thomas Merton. He had a term that seemed to capture this event: the
Unspeakable. There are times when we encounter something so terrible and terrifying, the experience pushes us to the edges of the effable. Such experiences of sin and violence in our world are concrete encounters with the Unspeakable. Merton explains, in part, what he means in his 1966 book Raids on the Unspeakable:

It is the void that contradicts everything that is spoken even before the words are said.... It is the emptiness of “the end.” Not necessarily the end of the world, but a theological point of no return, a climax of absolute finality in refusal, in equivocation, in disorder, in absurdity, which can be broken open again to truth only by miracle, by the coming of God...for Christian hope begins where every other hope stands frozen stiff before the face of the Unspeakable.

The Unspeakable is neither a word of comfort nor a greeting of consolation. It is a moniker that is challenging and indicting. It names a reality that most people would rather forget. James Douglass, in his book JFK and the Unspeakable, describes Merton’s concept of the Unspeakable as “a kind of systemic evil that defies speech.” However, it is not simply the object of our fear or an enemy from outside. Douglass continues: “The Unspeakable is not far away. It is not somewhere out there, identical with a government that became foreign to us. The emptiness of the void, the vacuum of responsibility and compassion, is in ourselves.”

To confront the Unspeakable requires that we face the ways we too are always already complicit in a culture of violence present in our world. This does not mean that individuals are exonerated from the particular and egregious acts of violence they commit, but it does mean that to look into the void of the Unspeakable involves looking into the mirror of our own participation in systems of violence.

Our Culture of Violence

One temptation we encounter in the face of violence like the events at the Boston Marathon or in Newtown, Conn., is to objectify the source of the violence and place it as an evil in opposition to the rest of us. This happens frequently, for example, in the use of the phrase “culture of death” (which originally comes from Pope John Paul II’s 1995 encyclical “Evangelium Vitae”). There is a sense in which a Christian might claim to be “for life” and therefore make the “culture of death” an exterior enemy to be fought.

Merton’s approach to evil, sin and violence in the world is more nuanced. To begin, we might realize that “death” is not the most opportune word and recall that death is a natural part of life. Talk about a “culture of death,” while the intention is good and the meaning important, could be taken to suggest that death in itself is a bad thing. St. Francis of Assisi, for instance, has a different take on this. In his “Canticle of the Creatures,” Francis praises God for the gift of “sister bodily death,” whom all living creatures will inevitably encounter. As a people of the Resurrection, we also believe that Jesus Christ has “put an end to death” (2 Tm 1:10) and that death does not have the last word. Death should not be feared in itself.

But violence, unlike death, is not a natural part of life. Violence is made manifest in little and big ways, in words and actions, in things seen and unseen. Merton’s concept of the Unspeakable captures the significance of this reality in two key ways. First, violence is not something that is ascribable only to individuals who commit evil acts, like murder and terror. In his book New Seeds of Contemplation, Merton describes how we are often quick to blame others and acquit ourselves.

When we see crime in others, we try to correct it by destroying them or at least putting them out of sight. It is easy to identify sin with the sinner when he is someone other than our own self.

In ourselves, it is the other way round; we see the sin, but we have great difficulty in shouldering responsibility for it. We find it very hard to identify our sin with our own will and our own malice.

It is difficult to accept that all of us are somehow implicated in the finitude and sinfulness of humanity. Merton writes that “we tend unconsciously to ease ourselves still more of the burden of guilt that is in us, by passing it on to somebody else.”

Here we have the second insight about the Unspeakable, which arises from the realization that we are also sinners and participants in an unnecessary culture of violence. What makes the Unspeakable unspeakable is the masking over and avoidance of this reality in which we too are always already a part. Unlike common conceptions of the “culture of death,” which is an outside enemy to be fought, a “culture of violence” exists in the language, presuppositions, behaviors and attitudes of a population. This is what is hidden, what is reflected back to us when we are forced to look into the void or face of the Unspeakable.

Michael Cohen, a columnist for the British newspaper The Guardian, wrote a sobering piece the day after the bombing suspect Dzhokhar Tsarnaev had been apprehended and his brother, Tamerlan, killed. He asked pointed questions that shine an uncomfortable light on a society that, in the same week, can shut down a major metropolitan city because of one suspect on the loose, yet fail to pass federal legislation to mandate criminal background checks for gun sales, a reform supported by nearly 90 percent of the population. He asked, with all due respect and sympathy to the dead and maimed in the Boston attack, how a society in which more than 30,000 deaths are caused by gun violence annually could react so drastically to the specter of terrorism when, in the past year, 17 Americans were killed in terrorist attacks.

It is a surreal and difficult-to-explain dynamic. Americans seemingly place an inordinate fear on violence that is random and unexplainable and can be blamed on “others”—jihadists, terrorists, evil-doers, etc. But the lurking dangers all around us—the guns, our unhealthy diets, the workplaces that kill 14 Americans every single day—these are just accepted as part of life, the price of freedom, if you will.

Part of what makes the culture of violence Unspeakable is our strong desire not to face the reality of our complicity in perpetuating injustice through our economic choices, attitudes, language, behaviors, lifestyles, biases, support (or lack thereof ) of legislation and so on.

It is a lot more comforting to blame the “other”— whether a “terrorist” or an amorphous “culture of death”— than it is to accept our individual and collective roles in perpetuating our unspeakable culture of violence.

The Beginning of Christian Hope

On the day of the attack in Boston, Cardinal Seán O’Malley, O.F.M.Cap., archbishop of Boston, wrote: “In the midst of the darkness of this tragedy we turn to the light of Jesus Christ, the light that was evident in the lives of people who immediately turned to help those in need today.” There are times—for example, when those who might otherwise run away from danger out of fear run toward others to provide care and assistance—when signs of Christian hope displace the behaviors and attitudes of the culture of violence. Christian hope is not a belief in a far-off utopia that will come from outside. It is a description of God’s presence in the world now, when, like Jesus, we love the unlovable, forgive the unforgiveable, embrace the marginalized and forgotten and heal the broken and broken-hearted.

Christian hope is a hope that withstands the challenge as it appears to us when we look into the void of the Unspeakable and realize that we can do something about violence in our world and live a different way. It is a hope that proclaims through the incarnate Word of God that what was once ineffable in the Unspeakable can be named and overcome, but it also requires our honest admission of “what we have done and what we have failed to do.” Only then do we confront the culture of violence that we would rather forget.

The Unspeakable culture of violence extends far beyond the city borders of Boston and Newtown. It is perhaps more acutely seen in the communities of Syria, Afghanistan, Pakistan and in places largely unknown to us. There the experience of the Unspeakable witnessed on a sunny Boston afternoon is an everyday reality: Marketplaces, buses, houses of worship, elementary schools and neighborhoods are all affected by the terror of violence and fear that we in the United States cannot begin to imagine.

In his essay “Letter to an Innocent Bystander,” Merton challenges us with a truth that undergirds the perpetuation of an Unspeakable culture of violence on the local, national and world stage: “A witness of a crime, who just stands by and makes a mental note of the fact that he is an innocent bystander, tends by that very fact to become an accomplice.”

Merton’s challenge for us in Boston and around the world is to overcome the fear that leads us to claim innocence while scapegoating the “other,” to embrace the Gospel and become more human in compassion and to look into the void of the Unspeakable so as to accept our complicity in the continuation of a culture of violence in so many little and big ways. Then we might be able move on to speak and live the word of Christian hope that begins there in the face of the Unspeakable.

This article also appeared in print, under the headline “The Unspeakable,” in the May 20, 2013, issue.

Daniel P. Horan, O.F.M., a columnist for America and the author of several books, currently serves on the board of directors of the International Thomas Merton Society.