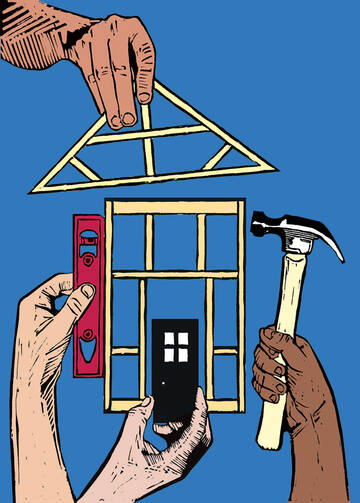 Why can’t we finish this house?

I hear this question every summer from teenagers and young adults who have come with me to the Dominican Republic, eager to make a difference in the lives of the poor. To be fair, some of them are merely reframing the question that friends and family have asked them: How many houses will you build on your service trip? They ask with good intentions, no doubt, but with some naïveté and some cultural paternalism as well. (Just what kind of a house would one expect to build in two weeks?)

When the students realize they will not see the completed fruit of their labors right then and there, they often feel disappointed and even worry the community will resent them for having “failed” this service project. Weren’t we good enough, they ask. Didn’t we work hard enough?

After discussing the sheer physical impossibility of building a house, even a humble one, in a week or two, we sometimes find other questions underlying the disappointment: Why can’t I see a finished product? Why can’t I fix this problem, right now, and go home having accomplished something?

These questions reveal some of the mixed motives and biases we may bring to this or any service experience: a hero complex, personal or national (I’ll save you—the American way); cultural paternalism (I have the answers, and I’ll do it for you); even guilt (this service absolves me of certain sins and responsibilities—past, present and future). In all these cases, one risks turning a project intended for others into something mostly, even totally, about oneself.

I should know, since this was my own mindset when I first went to the Dominican Republic in the late 1990s, where for two years I worked as a teacher and journalist. I had grown up Catholic in the Washington, D.C., area and valued achievement just as much as almsgiving. A few months after arriving, I tried to lend a hand to an impoverished Haitian immigrant community, whose leader I had befriended. Papito asked if I could help build latrines in his community, which had no formal sanitation system for its nearly 1,000 residents. I raised money from family back home to cover the cost of the project and showed up one day ready to dig the first pit. Papito’s reaction, in retrospect, was much gentler than it might have been. The beneficiary family, he explained, was able and willing to dig the pit, and to help the community carpenter mix the concrete, saw the wood and lay the bricks. They didn’t need my sweat or clumsy carpentry. My job was to do what they could not do: get the funds and later tell the story.

I had to change my perspective. It began with questioning my own assumptions. As it turns out, this was not such a radical notion: Catholic social teaching, which has been around a lot longer than I have, calls it subsidiarity, a principle that implies those who are closest to the problem often best know how to solve it. Papito helped me see my own paternalism, and how it would undercut the good I intended.

This realization led me to organize service-learning trips for students and was the inspiration for the nonprofit I later co-founded, Education Across Borders. That first latrine design, and the house design Education Across Borders has been using and refining for 14 years, emerged from conversations among community leaders, not a U.S. blueprint. The skilled labor is local, not imported. The community invites each student service group to begin the project shoulder to shoulder with them—digging and pouring the foundation, then raising the walls—but at week’s end, much remains to be done by local hands. The students may feel they have abandoned the community, but in fact their leaving is a critical part of what we call accompaniment. They may leave the construction site, but another type of work remains.

Service work, if it is to last, must be about accompaniment more than accomplishment. Yes, we want the house to be completed, but rushing it, doing it on the volunteer’s timeline, makes no sense in the long run. That unfinished house, that messy construction site the students photograph on the last day, is a tangible reminder that there is much more to be done—and not just in a remote Dominican community. Walking away from a fully finished house, we might be tempted toward a consumerist satisfaction: I came, I built, I changed the world. We may feel good, momentarily, but little would change, especially on the soul level. We would be tempted to put our experience on a shelf, rather than let it become a call to action.

Over the years, I have seen some mission and service groups that appear to be driven primarily by accomplishment. These teams, admirably, rise before dawn, work 10 or more hours a day on the construction site and get a whole a lot of building done. Many are not used to the tropical summer heat, and some students inevitably become dehydrated, suffer heat exhaustion or both. Their tremendous physical exertion leaves them with little energy for learning or for meaningful prayer. I remember once asking a pastor, at the end of his program, how the group’s experience had been. “Not bad,” he said, “but we didn’t get done as much as we wanted.”

But “getting a lot done” was never the point. Keeping up such an industrial pace had all but precluded him and the students from learning Dominicans’ names, speaking Spanish or having their assumptions—about the causes and structures of poverty, for example—challenged. No emotional risk was involved for the students, and the community, encouraged by the pastor to stand back and let the students work, was not empowered; little transformation could take place for anyone.

In fact, sometimes groups that get relatively little done on the construction site have a deeper impact on the community. A few years ago I led a group in mid-June, when sudden afternoon downpours frequently roll in. We lost many hours of building time that week, but the students took advantage of the opportunity to talk more with the villagers, including Étienne, a young immigrant from Haiti. Like other Haitians in the community, he was there to work in the coffee fields, but he was younger than most (just 16, the age of some of the students) and visibly more vulnerable. Several students went to great lengths to embrace him, plodding through long, piecemeal Spanish-English-Creole conversations, sharing their meals with him and even, in the case of one volunteer, giving him a church-suitable shirt (in a culture that values appearance highly) so that he could attend Mass for the first time.

That Sunday, Étienne sat among the students at the service and afterward joined in the despedida, the traditional send-off party. The sun came out, and stayed out; perhaps we should have spent the day on the construction site, to make up for lost time. But by then the students knew, without me telling them, where they were most needed. They were in the community center, dancing not with each other but with their new Dominican and Haitian friends.

When we focus on accompaniment, we realize what our work really is. Service is fundamentally about relationship, and as such it invites us to redefine work. Yes, it involves mixing concrete or ladling soup, but it also means walking with and listening to the suffering, sharing stories and laughter, tears and prayers. Understanding service as accompaniment reminds us to whom the house really belongs, and to Whom we really belong. A mission or service trip is always a potential pilgrimage, a time to surrender ourselves totally to God and God’s poor. Our agenda, our ego, our need to achieve and accomplish—we are invited to let it all go and to meet those we hope to serve on their turf, on their terms. This kind of surrender gives us the key to a chest of heavenly treasure, in which we’ll find, among other things, an unfinished house.

That roofless, unpainted house, instead of disappointing us, can inspire us: our work is not yet done. We have much to do, in our own lives and in the world, and accompaniment—more than accomplishment—shows us how to do it.

At the end of the program, my students go home and show their family and friends pictures of unfinished houses—and of Dominicans whose names they know, whose lives they have briefly shared and to whose family and community they now belong. (The community finishes the homes, and the students can eventually show off those pictures, too.) Their pictures and stories—fruit of the relationships they built, more than of the concrete they mixed—bear witness that accompaniment, rooted in relationship, is the most hopeful, life-giving, world-changing path. It can lead us to accomplish what only God could imagine, a house with many mansions, with room for all God’s children.

John J. McLaughlin is director of Education Across Borders, a nonprofit that serves the poor in the Dominican Republic, and author of the novel Run in the Fam’ly.

Show Comments (
1
)
Comments are automatically closed two weeks after an article's initial publication. See our comments policy for more.
Stacie Court
8 years 6 months ago
Thank you so much for this much-needed frank discussion of the goals of volunteer efforts. It is so easy to remember the logistical needs and so difficult to remember the personal needs. I supervise volunteers in my job and the volunteers who take the time to get to know each other and those we serve get so much more from the experience than those who simply show up, check off tasks on a list, and leave.