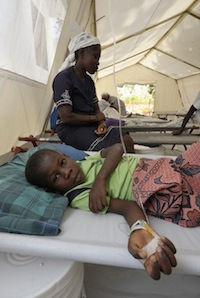 The United Nations has taken the rare step of invoking its legal immunity to rebuff claims for compensation from victims of the cholera epidemic in Haiti, the worst outbreak of the disease in modern times. Citing a convention laid down in 1946 that offers immunity from such legal claims, U.N. Secretary General Ban Ki-moon, telephoned President Michel Martelly of Haiti on Feb. 21 to tell him that the United Nations was not willing to compensate any of the claimants. The epidemic has killed almost 8,000 people and stricken hundreds of thousands more—about one out of every 16 Haitians. The infection is thought to have been carried into Haiti by U.N. peacekeepers from Nepal sent to help with disaster relief following the earthquake in Haiti in 2010. Ban’s spokesperson issued a carefully worded statement that pointedly did not accept or deny liability for the epidemic but made clear that the United Nations would not accept the compensation claims.

This article also appeared in print, under the headline “U.N. Asserts Immunity Against Cholera Claims,” in the March 18, 2013, issue.