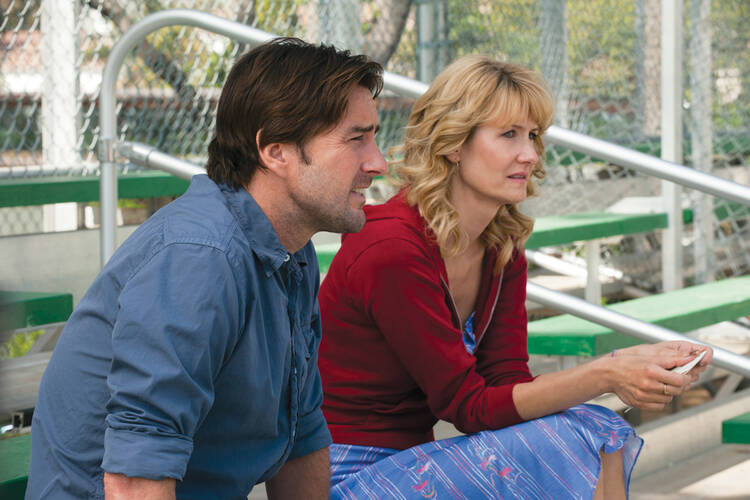 Perhaps I am cynical, or perhaps it is simply because I live in California, but the term enlightened primarily evokes images of Lululemon yoga pants, chi excavation and quasi-Eastern sayings wrapped up firmly in the latest issue of O, the Oprah magazine, which sits untouched on the floor of a bright shiny S.U.V. So when I read that HBO had given the green light to a series titled Enlightened back in 2011, my pupils reflexively headed northbound.

Other than its title I knew nothing about the show, and that, I thought, told me everything I needed to know. I have spent a short Jesuit lifetime hearing words like “enlightened” sprinkled in conversations that usually also contained phrases like “I’m spiritual but not religious.” My response, more accusatory than inquiring, is often: “Are you just trying to get out of Mass?”

The “spiritual but not religious” incantation is not one embraced by people in the business of religion, like myself, and so I was more than a little suspicious when first reading about “Enlightened,” which recently began its second season. But the reality of the situation is, in the Kardashianized world that is American television, there is little that resembles spiritually enriching programming, let alone anything remotely like religious programming, save perhaps episodes of “The Flying Nun” on Me-TV. So I chose to be open-minded, as they say, and gave “Enlightened” a shot. Begrudgingly I watched and begrudgingly I admit: “Enlightened” is good television. Very good television.

The show follows executive Amy Jellicoe (Laura Dern) upon returning from a holistic treatment center after suffering a nervous breakdown. Amy is attempting to apply her newly acquired spiritual skills in order to be an “agent of change” for herself and the world around her. All the archetypal quasi-spiritual signposts are there: the meditation in lotus position, the yoga, the Buddha bonfire, the self-help speak. All of it seems as if it’s meant to be a colossal joke, and yet somehow—remarkably—it isn’t.

The success of the show primarily comes from the fact that, while it acknowledges the sometimes absurd components of contemporary spirituality, it recognizes and respects its adherents and their quest for a deeper, more purpose-filled life. The American bourgeois world that Amy inhabits is saturated with fear, apathy and rampant materialism, and while she may be at turns domineering, controlling and prone to rages, the life she is carving out for herself seems far more authentic and full than that of those around her.

Amy misses the mark frequently; she pushes, pulls, cries, screams and alienates, but through it all—or because of it all—allows herself to be transformed. This can frequently make for television best watched through splayed fingers and squinted eyes, cringing with and for Amy. We care about this kooky heroine who, like the canary yellow dress she dons in the midst of the deathly gray confines of her corporate cell, is an unavoidable presence: a life force that cannot be extinguished.

“Enlightened” was created and conceived by Dern and Mike White, who plays the role of Tyler, the love-starved social misfit and Amy’s frequent comrade in arms in her latest crusade for change. White also pens most of the show’s well-written and multi-layered episodes, with a wit and a gentleness that speaks of someone quite familiar with the terrain of the spiritual realm. The show is clearly a labor of love for both, as Dern—who once upon a time was a Hollywood “It” girl along the same lines as Jennifer Lawrence and Kristen Stewart today—has found a career revival of sorts (she won a Golden Globe last year for Best Actress for the show) and her work clearly shows the joy and intensity that results when a great artist meets great material.

Dern’s real life mother, Academy Award nominee Diane Ladd, portrays her on-screen mother and gives an exceptional account of the quiet desperation and endemic fear underneath the shiniest of middle class facades. In one conversation Ladd’s Helen tells her daughter, “Most people don’t like their job; I didn’t like mine.” To which Amy responds: “You didn’t have a job, you were a stay-at-home mom.” The silence that follows that exchange is insightful, heartbreaking and hilarious.

Luke Wilson, as Amy’s ex-husband Levi, puts a very realistic glean on “functioning addiction,” always managing to get through the day as it were, but forcing those who care for him and his own self-worth to pay a hefty fee in the process. When Amy and Levi go for a weekend river rafting excursion, Amy, in a moment of cockeyed optimism, tosses his stash of drugs into the river. Not soon after this pharmaceutical exorcism, Amy finds herself holed up in a roadside motel, watching Levi go on one cocaine infused rant after another before finally passing out in her arms; a painful reminder of that most ubiquitous of self-help platitudes: You cannot change someone who does not want to change.

Which brings us back to that other well-worn maxim: “spiritual, not religious.” Amy is very much a product of the self-help-recovery model of spirituality from which this creed, and others like it, emerged. The phrase—stemming in large part from a desire not to repel those in the early stages of recovery who also have an aversion to organized religion—has been appropriated to serve numerous agendas of varying credibility, which has led to it frequently being met with the aforementioned eye-rolling and derision by traditional churchgoers like me.

But platitudes, however insufferable, do not just come out of a vacuum; rather they are always the consequence of something. In the case of “spiritual not religious,” it is oftentimes the result of very real hurt, pain and suffering inflicted by those who should have known better. Religion is a powerful force, and just as it has had, and can have, a remarkable impact on many lives for the better, so too can it cause unspeakable harm when mishandled. So perhaps the phrase “spiritual but not religious” should be understood not as a way to get out of our Sunday obligation but as a way of saying that sometimes, for those who need to get to God, the best place to start is as far away as possible from a church, or the Catholic Church.

But if Amy is the model for the new non-ecclesial movement of spiritual development, “Enlightened” inadvertently demonstrates the beneficial role organized religion can play in giving shape, direction and purpose to a scattered constellation of spiritual tenets. Amy’s lack of discretion, lack of emotional grounding and need for a moral locus would be best served by the application of some sort of underlying theological principle, but that would hardly make for good television. And so it would seem that, in the world of television at least, “spiritual but not religious” will have to work for the time being. And for “Enlightened” it does—quite nicely, indeed.

Jake Martin, S.J., is a first-year theologian at the Jesuit School of Theology of Santa Clara University, Berkeley, Calif., and the author of What’s So Funny About Faith?: A Memoir from the Intersection of Hilarious and Holy (Loyola Press).