Tolling for Thee: Ireland adapts the Angelus for the 21st century 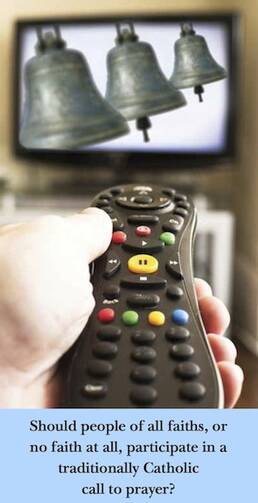 Every evening at 6 p.m., programming on Ireland’s national radio and television broadcaster stops. News and weather are put on hold while a bell tolls, ringing in the pattern 3-3-3-9. This daily observance of the Angelus, the Catholic prayer honoring the Annunciation, is among the longest-running segments on the state channel. The observance is rooted in the country’s strong Catholic past and has carried through to a new generation that is often wary of its religious heritage. It lasts no longer than one minute and 15 seconds, but in this simple tolling of the bells one can trace the changing profile of Irish Catholicism.

Although the Angelus broadcast in Ireland began in 1950, its origins can be tracked to the introduction of what became Raidió Éireann (Radio Ireland) in 1926. After 1922, the newly sovereign government of the Irish Free State was committed to carving out a distinct national identity. The state-owned radio broadcaster became a vehicle for this vision, with a schedule filled with Irish language and music, Gaelic football and hurling, Catholic prayers and very little else.

In 1950, the Most Rev. John Charles McQuaid, then Archbishop of Dublin, proposed that Raidió Éireann begin broadcasting the Angelus twice daily to mark the Year of the Annunciation. It was so hugely popular that the broadcaster decided to continue to feature the ringing of the bells beyond the close of the holy year. With the introduction of state television in 1962, Raidió Éireann became Raidió Telefís Éireann, popularly known as RTÉ, and the Angelus was promoted to the small screen as well, where it remains to this day.

Fast forward to 2011. Paddy Power, an Irish gambling company, was offering 5-to-1 odds that RTÉ would remove the Angelus by the end of the year. The audacious prediction proved disappointing for those who wagered against the bells, but the fact that the issue was talked about in such terms betrayed a huge change in the culture of Irish Catholicism.

There were two main causes for the shift; the first was the economic boom of the 1990s that led to an increase in wealth and immigration and fostered a more diverse, secular society. The second and perhaps more significant factor was the litany of scandals involving sexual, physical and mental abuse within the church, exposed over the space of two decades. Pictures of handcuffed priests and disgraced bishops shattered the image of one of the country’s most trusted institutions. In the midst of news coverage that reported in detail the horrors of clerical abuse, pausing for the Angelus seemed to some a cruel irony.

The turning point came in 2009. After years of investigation, the Murphy and Ryan reports, which detailed decades of child abuse and cover-ups by church officials, were published. It was also the year when the painful effects of the 2008 financial crisis sank in, leaving thousands out of work or without a home. It seemed as if all institutions—banking, government, church—were crumbling.

In the years leading up to this watershed moment, RTÉ had been forced to re-examine how it approached religious programming. Traditions like the Angelus and televised Mass were scheduled alongside church investigations, government apologies and critical media reports by journalists, who no longer deferred to the clergy. The audience too had a new level of caution and questioning. Thus in 2007, RTÉ appointed Roger Childs, a British man with a background at the BBC, as the new head of religious programming. His job was to reconcile the old broadcasting traditions with the new cultural and media landscape. So he began with the oldest.

In his opinion, the problem was not the Angelus itself but rather its outdated presentation. On television the bells were accompanied by short clips of Irish people pausing to reflect, interspersed with religious iconography. As he explains, “They were amateur actors having moments of epiphany. Yes, they were culturally diverse, but when they heard the bell they would just stare into space. I heard one person refer to it as the ‘dawn of the dead moment.’ Another said it looked like they were reacting to a bad smell.”

But it wasn’t just the bad acting. In a country that was growing in cultural and religious diversity, many felt the need to include images beyond exclusively Catholic iconography. Although the latest census indicates that 84.2 percent of the population identify as Roman Catholic, it also shows that Muslim and Hindu populations are on the rise. Because of RTÉ’s legal obligation to reflect religious and cultural diversity, the decision was made to shed the Angelus’ traditional Catholic image and develop a more modern and diverse incarnation of the broadcast.

The idea was simple: allow the Angelus to become a moment of reflection rather than a pronounced Catholic prayer. The production company came back with new representations of Irish life: a street artist sketching praying hands on Dublin’s College Green; a mother polishing a memorial stone to her drowned son; an older couple feeding swans on the River Shannon; a fisherman at sea on his trawler; and a Zambian immigrant gazing out of her window toward the Phoenix Park in Dublin.

Although the tolling of the bell remained, it was now accompanied by the sounds of 21st-century Ireland. “We have tried to show people from all walks of life finding time to pause and reflect, and it is not clear if they are thinking or praying,” says Mr. Childs, “The idea is that it is open to everyone.” And while it represented the transition from old to new, the redefinition raised a new point of contention for dissenting voices: Should people of all faiths, or no faith at all, participate in a traditionally Catholic call to prayer?

Ireland remains the only country in Europe that continues to broadcast the Angelus daily. In Italy it is broadcast only on Sundays. It is not broadcast at all in Britain, Spain or Portugal. Poland, a deeply Catholic country, does not feature the Angelus on any of its three state-owned television stations. Thus, for many Irish, this “redefinition” did not go far enough; the bells, in their opinion, were still embarrassing, outdated and had no place on state television.

The debate played out over several weeks after the rebranding. The level of interest was so great that Mr. Childs found himself on the front page of several national newspapers. The arguments were as fervent as they were diverse. Some suggested that RTÉ pull all religious programming; others wanted images of the Blessed Mother and the Annunciation to be brought back. But despite some criticism, most commentators praised the state broadcaster for bringing the Angelus into the 21st century.

Most surprising were the sources of this support. One 94-year-old nun wrote to thank Mr. Childs for bringing creativity back to the Angelus. The head of Clonskeagh Mosque wrote to say that he liked living in a country where the news and weather have to wait, because it shows that Ireland is a country that values prayer and religion. RTÉ consulted everyone from the chief rabbi to Methodist preachers to the Church of Ireland Broadcasting Committee. There were no complaints from these quarters either.

The greatest dissenting voices have come from atheists, humanists and agnostics, many of whom see the updated Angelus as an unpleasant hangover from Ireland’s deeply religious past. To this, Mr. Childs points out two things: First, the Angelus is a pre-Reformation practice and not necessarily a distinctly Catholic tradition. Second, it is a mistake to assume that the alternative, secularism, is the same as neutrality: “The fact is that 93 percent of people in Ireland still identify themselves with one faith. Religion, in one form or another, still holds an important place in the Irish psyche.”

The redefinition of the Angelus in many ways represented the dawn of a new era in Irish faith, one that leaves more space for questioning and uncertainty. “People are now more likely to say that they’re not religious, but spiritual,” says Mr. Childs. “But that’s not to say they’re throwing out the baby Jesus with the bathwater.” Most people can separate the good work of their local parish priest from the scandal-tarnished parts of the Catholic Church in Ireland, and the peace of the Angelus bells from the pain caused by some Catholic institutions.

A few years ago, an unfounded rumor that the Angelus was to be scrapped reached a small parish in County Clare. The next week, residents sent RTÉ a petition with 263 signatures protesting the cancelation. And while the numbers were small, the latest audience research suggests that this parish is not alone; more than two thirds of Irish people think the Angelus should continue in its current form, chimes and all.

Today, the 6 p.m. bells are likely to interrupt discussions about financial difficulties, unemployment and the mass emigration that has stripped the country of one quarter of its young workforce. As Roger Childs puts it, “For the person of faith it is a moment of grace; for the person of no faith it is a moment of peace. There are 1,440 minutes in the day, and this is just one.”

Rhona Tarrant is a broadcaster and writer from Ireland, now based in New York City. A regular contributor to RTÉ Radio, she covers religious current affairs, history and business.