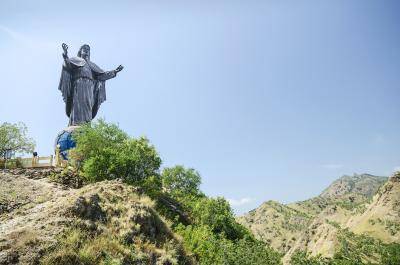 Ever attentive to the peripheries, Pope Francis sent the Vatican’s secretary of state, Cardinal Pietro Parolin, as his personal envoy to Timor-Leste to participate in the celebrations for the 500th anniversary of the evangelization of the people there and to sign a historic accord between Asia’s most Catholic state and the Holy See.

The papal legate was welcomed with honor on Aug. 13 in Dili, the capital of this state, which occupies half the island of Timor. He knows much about the country from his earlier work in the Vatican, where he held the brief on East Timor as it struggled for independence; and a colleague from then, Archbishop Joseph Marino, is nuncio there.

In a statement before the legate’s arrival, Prime Minister Rui Maria de Araújo recalled that “the Catholic Church, over 500 years, has provided a great spiritual, human and material support to the Timorese people, and also contributed decisively to the liberation process of Timor-Leste.”

For this, he said “the church’s action is recognized and valued in the Constitution of the Republic.” He recalled how the church “encouraged the people’s resistance and legitimized internationally the purposes of the Resistance” in the struggle for independence from Indonesia. Likewise today, he added, “the Catholic Church continues to be a central reference for the population and continues to support our journey along the path of national development, especially in the area of education.”

The evangelization of the Timorese began in 1515, when Dominican missionaries arrived from Portugal. Timor-Leste was a colony of Portugal up to 1975, except when Japan occupied the country during the Pacific war (1941-45). As Portugal’s empire crumbled, Indonesia annexed this land and ruled it as its 27th province from 1975 to 1999, when the United Nations took charge to oversee its path to independence. St. John Paul II is said to have boosted the independence drive when he visited on Oct. 12, 1989.

Timor-Leste gained independence on May 20, 2002, and immediately established diplomatic relations with the Holy See. Despite political and economic challenges since then, it remains the most densely populated Catholic country in the world after the Vatican City State: 97 percent of its almost 1.3 million people are Catholic; 60 percent are under the age of 25. The Timorese church has three dioceses, 116 priests serving 58 parishes and some 600 women and men religious. With 574 seminarians, it is rich in vocations to the priesthood. An estimated 400 young men are turned away from the minor seminary annually because of lack of space to accommodate them.

On Aug. 14 the papal legate and the prime minister signed the historic agreement at a ceremony in the government palace. The accord’s 26 articles provide a clear understanding of the separation of church and state, while affirming their respective responsibilities and competencies. Speaking briefly after the signing, Cardinal Parolin hailed the agreement “as a significant sign of the fruitful interaction between church and state” and noted that its Preamble recognizes that for 500 years the church “has been deeply rooted in the history of the Timorese people, who embraced the Catholic faith not by the force of the sword but by the openness of their heart.”

The accord, he said, rests on two fundamental principles: the “values and principles of international law in the matter of religious freedom” (Preamble) and “the guarantee of the freedom to profess and practice the Catholic faith publicly (Article 1).” And based on these two concepts, it “offers space and opportunities for the Catholic Church to act in society, in accord with its mission of service to the people” and in line with constitutional norms and local legislation. It defines specific areas where the church can serve the people freely and openly—for instance, by providing spiritual assistance in prisons, hospitals, clinics and orphanages (Article 8), performing works of charity (Article 4), establishing schools at every level and assisting Catholics in educating their children in the faith, including the right to teach the Catholic religion in public schools (Article 9).

Cardinal Parolin concluded by telling his hosts that before leaving Rome, Pope Francis asked him to assure the authorities of his closeness to them on this happy occasion and of his “prayers for this noble and beloved nation of Timor-Leste.”

@gerryorome
Show Comments (
1
)
Comments are automatically closed two weeks after an article's initial publication. See our comments policy for more.
michael baland
7 years 5 months ago
"... Asia’s most Catholic state ...." This must come as a shock to the approximately 80 million Catholics in the Philippines.