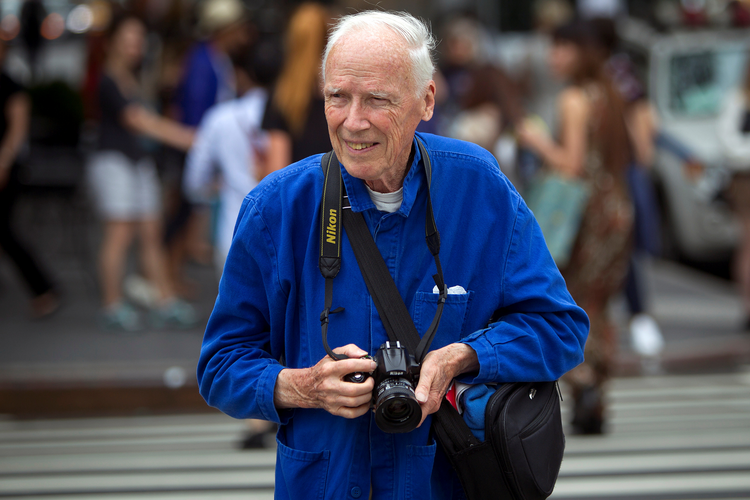 He was a fashion photographer who worked in Manhattan and regularly went to Paris runway shows, yet he used duct tape to repair his own inexpensive clothes.

Bill Cunningham, who was responsible for both a street fashion and society spread in The New York Times Style section every Sunday, chose a life of simplicity. For years he slept on a cot in a cramped single room. No kitchen, no bathroom. He got around the city on a bicycle. He didn't own a television and never went to the movies.

Seeing Miley Cyrus at an event, he asked his assistant if she was Madonna. After taking a photo of Katy Perry he asked him: "Is she one of those Kardashian kind of people?" It wasn't just that he was indifferent to celebrity. To him, anyone who was dressed well — old or young, male or female, gay or straight, rich or poor — was a celebrity.

Father Kevin Madigan, pastor of Manhattan's Church of St. Thomas More, said: "When deciding which galas to cover for the Times, what mattered more to Bill was the nature of the charity, than the celebrity guest list. Bill would always be respectful and appreciative of the person whose picture he was taking, whether it was some street kid or a society grand-dame."

He described Cunningham as "clean of heart."

Since his death June 25 at 87, there has been a constant stream of admirers who remembered how hard he worked and what he accomplished. More importantly, they remembered him for his kindness, modesty and integrity. But while most people remembered him taking photos at 57th and Fifth Avenue, few commented on where he was every Sunday morning — at Mass.

Cunningham didn't talk about it, either. In a 2010 documentary, he responds with a cheerful laugh, a joke or a story to every question, except one. When asked about his weekly Mass attendance, he falls quiet and looks at the floor for a long time before answering. Finally he recalls with a smile that as a child his main interest in church was looking at the hats women wore. Then, after another long pause, all he really says is that his religion is important to him.

But although he wasn't articulate about his faith, he lived it. "Those closest to him would attest that he was a spiritual person," said Father Madigan told the Catholic Star Herald, newspaper of the Diocese of Camden.

"From Sunday to Sunday Bill could be found in one of the rear pews, as unobtrusive here as he would be at some gala at the Met or the Pierre or at a fashion runway," the priest said in his homily at the private funeral Mass he celebrated for Cunningham June 30.

"Bill's Boston Irish upbringing might have inclined him to be reticent about announcing his religious beliefs, but no doubt it was that foundation in his faith that enabled him to be the unique individual we have known him to be," he continued.

And with his work, Father Madigan said, the photographer found his vocation.

"A vocation is seen as a kind of call from God, pairing a person's interests, talents and passion in some noble pursuit, with the promise that following that path will be of service to others and bring to the one who answers that call genuine fulfillment and happiness," the priest said. "It was the mission of Bill Cunningham to capture and celebrate beauty wherever he found it. His whole life was dedicated to that single pursuit.

"Like any true artist," the priest said, Cunningham "helped people see in a new way, see what might otherwise have gone unnoticed in the hurried pace of city life. And the delight, the pleasure, the joy Bill found in pursuing his vocation was undeniable."

Cunningham's death was announced on the front page of the Times, and the following week the paper devoted five pages of editorial space to his memory. Ralph Lauren, Saks Fifth Avenue, Bloomingdale's and Macy's all took out full-page ads in his memory.

Cunningham, it seems, not only managed to live a Christian life but to be respected and admired for it.

"He made a tremendous impression upon people who are easily jaded in the fashion industry," Father Madigan said. He quoted Dostoevsky's belief that "beauty will save the world," but added, "in fact, it will be people like Bill Cunningham who will save the world."

"May the qualities he exhibited — his transparent goodness, his simplicity, his integrity, his sense of joy, his enthusiasm for his life's work, his thoughtfulness — not be forgotten, but emulated to whatever degree in our own lives."

Carl Peters - Catholic News Service
Show Comments (
2
)
Comments are automatically closed two weeks after an article's initial publication. See our comments policy for more.
Gef Flimlin
4 years 11 months ago
I am by no means a clothes horse nor do I really care what fashion is supposed to be but for the past few years I got so much pleasure in Bill Cunningham's video reports that would be on the NY Times webpage. What struck me the most was his sense of fun and joy...seeing goodness in both the classy and strange. He respected people's choices and lived a simple life. Amazingly simple. Practically monastic. Not something I could do, but for him, it was normal. How fantastic. I'll miss hearing his voice but it will last in the recesses of my mind. Bless him.
Winifred Holloway
4 years 11 months ago
I am pleased that Fr. Madigan described what Mr. Cunningham did as a "vocation." Several years ago, the New Yorker printed one of their long pieces on Bill. Up to that time, I only knew him as the name beneath the photos in the NYT. What struck me at the time was the quality of his devotion to his work, and yes, his art. It seemed to me that he did not consider fashion photography a job or even a profession, but a vocation. He didn't pontificate about his work, he just did it and let it speak for itself. His austere lifestyle was both a puzzle and an intriguing aspect of his life. A most memorable moment for me from the 2010 documentary on his life which I think captures perfectly his integrity: he was hired by a prestigious fashion publication to do a photo layout on how upper class suburban women in Connecticut were translating the Paris runway fashions to their own personal style. He was horrified when the editor of the magazine wrote text around Bill's photos to mock these women. And he quit. Missing out on the money and the prestige. But he didn't care. He stayed true to himself, his work and his values. A man for all seasons.