I was depressed. Transferring to Catholic school was my last resort.

I was depressed. Transferring to Catholic school was my last resort. 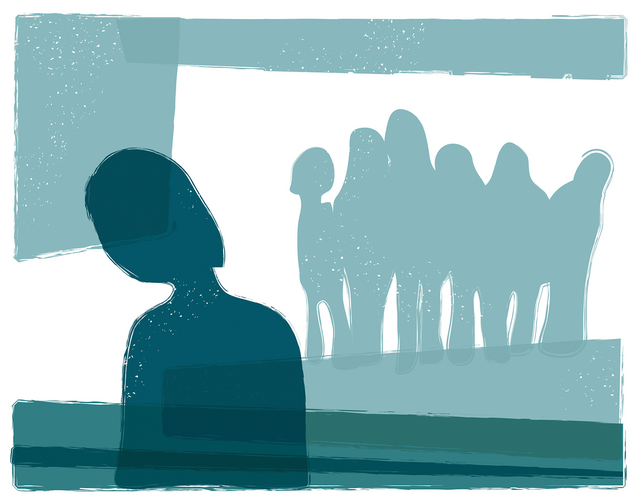 I was 13 years old when I took my first steps inside the lobby of Cardinal O’Hara High School. It was just after the New Year, and returning students were already stationed at their desks. Peeking into the classrooms, I saw orderly, uniformed rows facing the crucifix, ready to chant in unison the Our Father and Hail Mary. There was no cue from the P.A. system to begin the prayers; there were no pamphlets to guide the recitation of those well-ingrained verses.

I was an invader in this place. But as I walked down the first-floor hallway of administrative offices alongside my hesitant parents, I could not help but feel the rhythmic pulse that beat deep within the foundation. To the students, staff and faculty, the pulse was familiar, perhaps no longer even detectable. They spoke, signed, sat and stood with the ease of being gently guided by an old friend. I was not so naïve as to believe that each person went along willingly. But, as an outsider looking in, I could see no sign of dissent or rebellion. Everyone went through the movements. Everyone passed as someone who belonged.

They sat facing the whiteboard, waiting to start their lessons. I sat before the principal, waiting to be accepted as a member of their community.

I was 13 years old when I became depressed. The light that had once shone in my eyes when I woke each morning ready to conquer the day slowly burned down. It was a period of time that I can only recall as torturous and confusing. I was not the happy person I tried so hard to be when winning the approval of my teachers and peers. I had been a clarinetist in the concert, pit and marching bands for many years and a dedicated performer for a local dance studio since age 3. But I could no longer talk endlessly about the hobbies I was once proud to pursue. I was slowly becoming more and more withdrawn from the person I had always been, and frightfully, no one seemed to notice or care.

By the time anyone noticed I was not acting normally, I was very sick. I had no desire for anything that took effort and gave up on homework assignments, extracurricular activities and even personal hygiene. I did not care if I missed school, and, when confronted by counselors and therapists, I was forced to conclude that I did not care if I lived or died. My friends drew their own conclusions, whatever they were, and collectively decided that I was not worth their concern. Everything and everyone that I turned to for love and acceptance was missing when I needed it. To this day, I believe it was that realization, more than being suicidal, that broke something deep within me.

Life as an Outsider

I transferred to this Catholic high school as a last resort. I had the grades, the recommendations and the tuition money necessary to start as a freshman that winter. I was handed a class schedule with room numbers that meant nothing. I was shuffled away to the lunch period already in progress to introduce myself to future classmates whose names meant nothing. I was instructed on where to shop for the appropriate attire. The brands and colors were as unfamiliar as every pair of eyes that looked with curiosity upon the quiet new girl.

But, like my new classmates, I went through the motions. I did all that was asked of me. Despite what my family believed, I did this not because I had faith in my decisions and the path that I was choosing for myself. Rather, I was numb enough to accept that nothing that I wandered into, no matter how uncertain the situation, could leave me as defeated as the environment I was choosing to walk away from.

Just a semester before, I had been no different from the students I was now meeting. I attended a public school in the district I had belonged to since kindergarten. My older siblings set the pace and tested the waters. It was expected that my transition, as the youngest, through all of the same milestones would be the smoothest. There were friend groups, fallouts, failures and phases—all of which were unique to my journey but nothing so out of the ordinary as to unsettle unsuspecting adults and relatives. I was happy to be included and loved by those who mattered to me.

In middle school, it did not make a difference to my social and academic life whether or not I could count on religion. My parents, one a non-practicing Methodist and the other a non-practicing Presbyterian, did not baptize their children into a specific church. My siblings and I were told that the decision was ultimately ours to make, and whatever we chose would be respected—as long as we identified as “some sort of” Christian. My friends had parents who took the opposite approach when it came to their children’s spiritual journeys. They were forced into Catholicism at birth, and eventually most were turned off by organized religion.

I was told I was lucky to be exempt. But in my public high school, when different social cliques came together on Thursday mornings to rant about the nuns who ran last night’s C.C.D. class, and when attendance dropped conspicuously on holy days, it was difficult not to feel like I was missing out. Even in that secular setting, I sensed a pulse that reverberated through the playground blacktop, the hallway lockers and the cafeteria food lines. But it was not my own. Religion played no positive role in my life; it just further separated me from the inclusion I craved.

I occasionally asked myself whether or not I believed in God, and thought back to various services I attended over the years. I could sing fun little songs from Presbyterian summer Bible camp and admired the stained-glass windows inside the Lutheran church I sometimes frequented. But I found I was searching for something that refused to make itself known. It was frustrating to witness others being called to worship. If God existed, I concluded, God was not interested in my soul. God did not include me, but my too-cool-for-religion friend group did.

That is, until they didn’t.

My decision to transfer came as a surprise to many, as I kept many things secret during that dark period. When I started classes at Cardinal O’Hara, I was not interested in a new beginning. I simply wanted to finish my required time. I was not interested in new friends, either. But it turned out God had a different plan. It took time and patience, but new friends found me. They did not give up on the moody and disconnected new student. Nothing was easy, but I was taught how to assimilate. It was a new form of love I had not yet known.

I was 18 years old when I was baptized into the Catholic Church. The first person I was introduced to on my first day of class stood next to me at the baptismal font as my chosen godmother. Since then, I have decided that my faith lies in my journey. I do not fear a lack of acceptance because I know that God has a plan in motion. With God, I am no longer an outsider looking in. With God, I have found my missing community.

Show Comments (
2
)
Comments are automatically closed two weeks after an article's initial publication. See our comments policy for more.
Henry George
3 years 6 months ago
Very thoughtful and very moving. Keep the Faith.
Thomas Higgins
3 years 6 months ago
Having graduated from the same high school some 44 years ago, I was proud to have read this moving account of my alma mater helping to bring Nicole to faith in Christ and the Catholic Church. Well done Cardinal O'Hara. Tom Higgins
Advertisement

This article also appeared in print, under the headline “Through the Motions,” in the November 28, 2016, issue.

Nicole Bazis, a native of the greater Philadelphia area, graduated from Fordham University Lincoln Center in 2016. She is working toward a master of arts in theological studies with a concentration in early church history at Princeton Theological Seminary.