Laws of Attraction: Love and loss in ‘The Theory of Everything’ 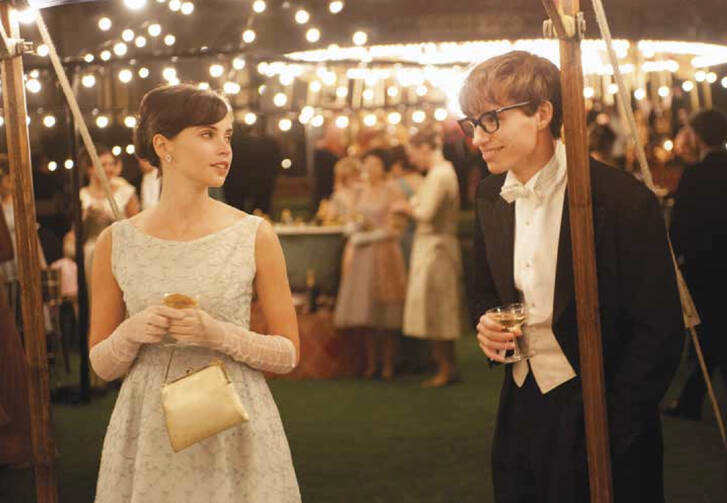 The struggle to form and sustain relationships is a universal experience. The struggle to understand the existence of black holes, less so. So it makes sense that The Theory of Everything, a new biopic about Stephen Hawking, the physicist and cosmologist, puts more focus on his love life than on the scientific theories that made him famous.

The romantic early scenes of the film suggest cosmic forces may be at work in uniting the young Hawking, an atheist and budding scientist (Eddie Redmayne) with a young arts student and Anglican believer, Jane Wilde (Felicity Jones) at a party at Cambridge University. The two talk for hours, and the wits of both are revealed through their banter. Hawking describes cosmology as a “religion for intelligent atheists,” adding quite seriously that his aim is to find “one single equation that explains everything in the universe.”

It is easy to imagine that this intermingling of faith and physics will drive or divide the couple. But viewers hoping to find a deeper conversation about either science or religion will be disappointed. The quick scenes in churches and classrooms offer superficial treatment of these subjects and of the characters’ motives. The film’s attempts to place the story of the couple’s love and suffering into context are more deliberate, but ultimately unsatisfying.

We first encounter Hawking at Cambridge University in the early 1960s in the midst of beautiful images of English gardens and university lawns, all in a muted palette that provides a vintage feel. But this idyllic mood fades as the symptoms of Hawking’s poor health begin—the shaky handwriting, a spilled coffee, a violent fall. He is diagnosed with a motor neuron disease that doctors say will cripple his body and trap his mind. Watching Redmayne’s physical transformation throughout the film is breathtaking. His efforts to portray Hawking’s diminishing physical abilities are convincing and commendable. He conveys great emotion and intellect in the smallest of gestures, the lift of an eyebrow or roll of the eye.

“Theory” depicts Hawking, at 21, being given two years to live and falling into a depression before being pulled back from the edge by Jane, who loves him forward with great intensity through Jones’s performance. The two soon marry, but they continue to struggle with the effects of the disease on their relationship, and their seemingly storybook romance becomes increasingly fraught. Even Hawking’s huge commercial success and increasing fame—his book, A Brief History of Time, has sold more than 10 million copies—has a dark side. It is not just illness but ego that begins to drive the couple apart, and both seek refuge elsewhere.

“Theory” is based on Travelling to Infinity: My Life With Stephen, Jane Hawking’s revised memoir about her marriage. The original version of the memoir contained greater detail about the darker side of their relationship, but much of that remains vague or unspoken in the film. Although we see Hawking continue to impress the world with his commitment to communicating through various assisted devices, viewers are left wondering exactly what is motivating his choices throughout.

Still, “Theory” offers much to think about in the context of current events. The film’s depiction of bodily suffering and degenerative illness offers timely context as discussions of assisted suicide continue across the county. And the film’s realistic and respectful depictions of such physical struggles offer a glimpse into the lives of individuals facing such illnesses as well as of the family members who serve as caretakers.

In recent years Stephen Hawking has publicly stated his support for assisted suicide, even while his very existence remains a testament to the ways life surprises us and the amazing ways in which human beings choose to persevere in the face of suffering and uncertainty. The man once given two years to live has lived for more than five decades. In the film, the Hawking character acknowledges the value of this perseverance. Through a communication device, he tells an audience: “There should be no boundaries to human endeavor. However bad life may seem, while there is life there is hope.”

Arriving on the heels of the Synod of Bishops gathering in Rome that brought family struggles to the fore, the film’s depictions of the stressors on a modern marriage, although not fully fleshed out, provide food for thought as the church considers its best pastoral response to couples who are struggling with whether to love, leave, stay, suffer or express solidarity. In their closing document, the synod fathers wrote that “within the family are joys and trials, deep love and relationships which, at times, can be wounded.”

“Theory” can provide talking points for discussing such hurts. The film depicts characters persisting, hoping and believing—though they may not know in what. They try to make order of chaos, to make their relationships make sense. Yet their efforts simply prove that any theory about an individual that fails to account for the depth and complexity of human beings will result in a picture that ultimately feels incomplete. Love, it turns out, is not an exact science.

Kerry Weber is the managing editor of America. Twitter: @Kerry_Weber.