The Tall Tales We Tell: Catching up with Tim Burton’s ‘Big Fish’

The Tall Tales We Tell: Catching up with Tim Burton’s ‘Big Fish’ 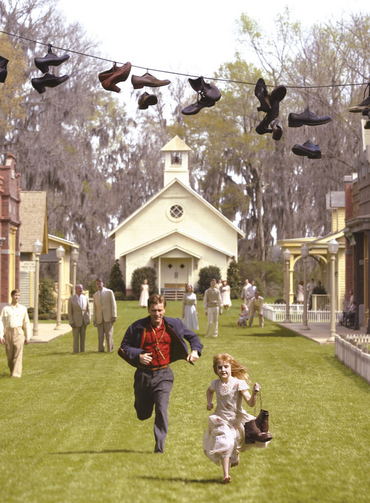 An American paratrooper leaps from a plane, descends through the hazy night sky and lands, unnoticed, directly on the backstage catwalk of a large, U.S.O.-style show. Onstage an Asian ventriloquist performs an expressionless routine before a sea of unmoved military brass with a distinctly Communist feel. An emcee cuts the ventriloquist’s act short, and things don’t look good for performer and dummy as several soldiers with guns escort them offstage. Meanwhile, the paratrooper stealthily subdues numerous guards backstage, sneaks into a tent and covertly photographs some classified documents. Although he is far behind enemy lines and separated from his unit, he plots his escape back home aided by a canoe, performing conjoined twins and the desire to see his beloved wife again.

This outlandish tale comes from Tim Burton’s 2003 film Big Fish, a film that on its surface has little to do with religion but easily can be viewed as a parable for faith. Largely forgotten in the decade since its release, its adaption into a musical opening in October on Broadway provides a fresh opportunity to explore its themes. This is especially valuable as the church approaches the end of its observance of the Year of Faith.

Efforts surrounding the Year of Faith seek to renew the faith of people in the pews who are on autopilot, as well as of people not in the pews who, at some point, said, “Forget it; I’m done with this” and walked away. At the start of the Year of Faith, the Vatican encouraged Catholics to perform works of charity, reflect on the lives of the saints and renew their practice of going to confession, among other things. More recently, Pope Francis has encouraged young people to “make a mess” and church leaders to be like the shepherd who “smells like his flock.” While neither Benedict nor Francis included “go watch a movie” on their list of recommendations for rekindling faith, it seems the efforts of the Year of Faith get a small, if unlikely assist from this quirky, colorful film.

Cinematically, “Big Fish” hails from an alternate universe of the career its director might have had. Burton’s early work told wildly inventive tales of strange loners and people struggling to make sense of the weird worlds around them. These films were usually dark, strange and sometimes off-putting and nasty, but the storytelling was generally fun, elevated by signature visuals.

Since 1999, however, Burton has specialized in applying his quirky aesthetic to superficial re-imaginings of various pop-culture commodities (“Sleepy Hollow,” “Charlie and the Chocolate Factory,” “Alice in Wonderland,” “Dark Shadows”), usually with Johnny Depp front and center.

“Big Fish” is the almost solitary exception. Burton attributes the film’s rare human depth to his coping with the death of his own father during production. In the film, he does something he never did with Pee Wee Herman, Batman or Edward Scissorhands. He illustrates the sometimes painful challenge of wrestling with the ramifications of trying to understand the people closest to us: family.

In this case, it’s the story of an estranged son, Will Bloom (Billy Crudup), trying to reconcile with his dying father, Edward Bloom (the older version played by Albert Finney, the younger version by Ewan McGregor). Edward has always enjoyed telling elaborate tall tales about the adventures of his early life, including a literal giant fish story. By the time Will reaches adulthood, the endless retellings have strained their relationship and convinced him that his father 1) is full of it and 2) only talks about himself. The movie begins with Will living in Europe, about to become a father himself and frustrated that all he knows about his own father are “amusing lies.”

Edward’s tall tales, which take place in the mid-20th-century American South, have a sprawling, epic quality that, when seen in flashback, feel like something out of Greek mythology or the Old Testament. For instance, the story of how he met, fell in love with and struggled to attain the love of his future wife, Sandra (the older version played by Jessica Lange, the younger by Alison Lohman), involves Will befriending a giant, joining the circus, catching an elusive glimpse of the love of his life and then spending months trying to find her again. He is shot from a cannon, attacked by a werewolf and beaten to a pulp by a childhood rival who happens to be engaged to his future wife when he finally meets her.

As happens in biblical accounts of the often messy love story of God and humanity, Edward endures many trials, including the aforementioned paratrooper episode, to be with his love. It all seems fantastical, but when the viewer sees the couple in their old age and the love that still radiates between them, it is clear that such an epic backstory is apt. It is also worth noting that Edward’s tall tales have one other hallmark of faith and evangelization, as Pope Francis describes them. His adventures take him decidedly outside of himself and far and wide in the larger world. But this mythos is too much for Will to swallow. He walks away like a man renouncing his faith.

But Will cannot stay away forever. His father’s story is part of who he is, so he has to explore it and spends much of the film doing so. Will’s connection to his father grows stronger as he questions—as a person’s faith tends to do—and he comes to understand it better. It culminates at his father’s deathbed, when Will, surprisingly and against his own better judgment, has a conversion. He compares it to hearing a familiar joke and suddenly remembering why it was funny. In “Big Fish,” the relationship between father and son is restored only when Will, still not fully understanding what he is doing, accepts the legacy, the sense of familial belonging that accompanies becoming the storyteller. As the poet Ralph Hodgson said, “Some things have to be believed to be seen.”

“Big Fish” shows how people wrestle with and even reject the structures, traditions and belief systems presented to them from an early age, only to come to a deeper, more mature understanding and sense of ownership later in life. Catholics understand that we can become frustrated and even distance ourselves from the church, but that we cannot stop being part of that family. At the end of “Big Fish,” Will has not only earned a renewed appreciation for his late father; he has resolved to keep his memory alive by passing the stories on to his own son. In fact, the entire movie, with wraparound narration, is an instance of Will perpetuating the stories.

If the church is going to succeed in renewing its evangelization efforts in the Year of Faith and beyond, more attention should be given to the process that occurs when an unlikely person, one who has wandered far away, returns to the faith. Maybe this is part of the reason why Pope Francis has encouraged Catholics to go to “the outskirts.” This is also evident in the pope’s recent appeals to nonbelievers and efforts to engage them. When people on the outskirts find their way back, they often become the most powerful agents for passing the faith to future generations and new frontiers. “Big Fish” depicts the trajectory of the journey back vividly, and thus transforms into a beautiful, if accidental, film about faith.

This article also appeared in print, under the headline “The Tall Tales We Tell,” in the September 30, 2013, issue. 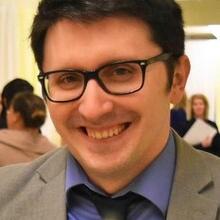 Don Clemmer is assistant director of media relations for the U.S. Conference of Catholic Bishops.