Talking About God: ‘Lumen Fidei,’ a new invitation to faith 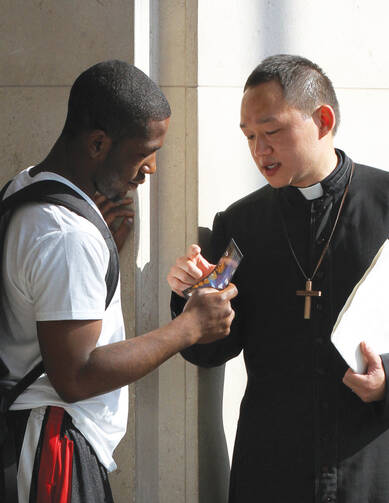 Before his election to the papacy, Joseph Ratzinger recalled an anecdote from the deliberations that preceded the Second Vatican Council. When they were first gathering, the bishops clearly saw their mission as continuing the work of the First Vatican Council. The primary task would be, as John XXIII so familiarly said, to help provide an aggiornamento of the church. But from within that perspective, another voice emerged, that of the elderly bishop of Regensburg. He proposed a more foundational vision to his brother bishops, urging them to “talk about God. That is what is most important.”

According to Cardinal Josef Frings of Cologne, a new tone was evident after that intervention. The bishops’ task would indeed be to update the church, but the only way to do that authentically would be to allow for the primacy of the spiritual, to go to the divine source of the church, God’s very self. Going to this source would need to be an act of humility, opening up yet again to the freshness of the mystery of what it means to be in relationship to God as God’s people. It would be an opening up to the light of faith.

Some 50 years later, the church has been given a new invitation to allow again for the primacy of the spiritual, letting this light of faith radiate anew. On July 5, Pope Francis offered his first encyclical to the universal church, extending precisely this invitation to Christians everywhere. Francis acknowledges that the text of the encyclical is largely the work of his predecessor: “He [Benedict] himself had almost completed a first draft of an encyclical on faith. For this I am deeply grateful to him, and as his brother in Christ I have taken up his fine work and added a few contributions of my own” (No. 7).

“The Light of Faith” might well be read in light of that earlier intervention before the council, in which her pastors were called not just to adjust external structures and strategies for the renewal of the church but first and foremost to “talk about God.” This is precisely the task Benedict and ultimately Francis have undertaken in this encyclical, the last in a triptych on the theological virtues, following encyclicals on love (“God Is Love”) and hope (“Saved in Hope”). In each of these, Benedict offered extraordinarily tender visions of the nature of God, who is self-emptying love, and how humanity is saved by that love offered from the heart of Christ pierced on the cross. He has pointed to the reality of humility in God as well as the necessity of humility in humanity to receive divine love.

Francis’ popularity since his election has been widely noted. The cause of this seems to be his simplicity and humility. Whether because of his choice of papal name, his first gesture from the balcony of St. Peter’s asking for the prayers of the people before he would offer his own blessing or his words and deeds since then highlighting a spirit of collegiality and resisting the trappings of pomp and circumstance, people of all sorts seem to be taken with his spirit. This manifestation of humility resonates with the preaching and writings of his predecessor. Indeed, the very creation of “The Light of Faith” strikes us as humble. The humility of Benedict, who did the labor of the writing and then simply left it on the desk for his successor to do with as he pleased, is striking. So, too, we are struck by the humility of Francis to receive such a gift and then to acknowledge in the text itself that it was largely the work of his predecessor. Very little ego is at work in either of these men. This is refreshing. And yet there is great zeal and confidence in each of them to propose to the world the joy that comes in living this common faith.

These characteristics of humility and receptivity display the very structure of faith that this encyclical explores. Only in a posture of humility and receptivity can we be open to the light that comes to us from above. Faith is first of all a gift. The light of faith cannot be autonomously generated (No. 4). It is given first from God (No. 6). It is handed on down through the generations of the faithful who have preceded us (No. 8). It is given in a way that is mediated (No. 14), paradigmatically through Abraham and Moses. This gift of faith culminates in the person of Jesus (No. 15) and is extended to the present through the apostles whom he chose and their successors (No. 40). And yet this faith always remains personal. It requires not only our listening, but also our response.

The structure of faith, since it is handed down from earlier ages, is about remembering. Following Augustine, Francis indicates that it is essential to use the sacred faculty of memory to continue to allow the light of faith to shine. We must remember what God has promised, indeed what God has done. Only in this act of remembering, in turning back to God and God’s word, can we get our bearings in the present to know who we are, what we are made for and where we are going. This structure is established from the beginning in the model of Abraham. Francis explains: “As a response to a word which preceded it, Abraham’s faith would always be an act of remembrance. Yet this remembrance is not fixed on past events but, as the memory of a promise, it becomes capable of opening up the future, shedding light on the path to be taken” (No. 9).

Francis acknowledges that this call to remembrance is always a challenge because there is a constant temptation to lose patience with the call to remember who the living God is and to take the time to listen and speak with him. It is tempting to put our trust in something more immediate and not so unsettling as a relationship with a personal God. Drawing upon Martin Buber’s recollection of a way of describing idolatry as “when a face addresses a face that is not a face,” the constant need before us is to turn again to the living God who has shown us his face in Christ. We continue to be fooled into thinking there must be a more efficient way, one that affords us a more acceptable level of control. Yet, “Once I think that by turning away from God I will find myself, my life begins to fall apart (cf. Lk 15:11-24). The beginning of salvation is openness to something prior to ourselves, to a primordial gift that affirms life and sustains it in being” (No. 19). This is the context of this encyclical offered by Francis, seeking, like his namesake, to rebuild God’s church by stirring up a desire in the people of God to seek again the face of God.

Christopher Collins, S.J., is director of the Catholic studies program and assistant professor of theological studies at Saint Louis University. He is the author of The Word Made Love: The Dialogical Theology of Joseph Ratzinger/Benedict XVI (Liturgical Press).

Show Comments (
2
)
Comments are automatically closed two weeks after an article's initial publication. See our comments policy for more.
William Atkinson
8 years 6 months ago
When Jesus was asked by the Apostles, his fisherman buddies, Who was God, or Who is the Father, the way Jesus answered kind of suggested he was answering a temporary question, not an eternal answer as if his fisherman buddies were being cute, rather than informative, the evangelist later recorded the conversation as if it was profound and theological, but the answer sort of sounded quik and for the moment. I once was hosting some biblical teachers and professors at Baptist seminar in Shawnee, Oklahoma and was sort of scorned for asking that question, like I was challenging their super knowledge of the scriptures. (by the way none of the 56 attendees got it right, or the other question I asked "What did Jesus require of his followers to follow Him into the next world - Heaven"?). I have found that most people, Jesuits included don't answer these biblical questions correctly, according to Jesus's teaching as related in scripture.
Thomas Poovathinkal
8 years 6 months ago
Talking about God even non-Christians do. What is so great about it? Those who claim to have inherited the offices of the Apostles must witness to the Lord, proclaiming his Word thorough the power of his Holy Spirit. Or else an aspect of the Church will keep on dying as it has been happening in Europe for long time. Remember the Lord had said, "Will there be Faith left on earth when the Son of Man comes back?