Syria: Christians Can Be a Witness For Peace as Conflict Continues 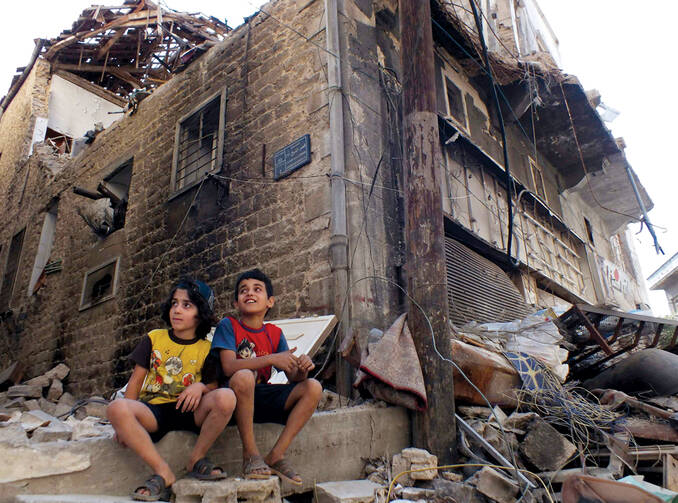 As the death toll mounts and the bombs and mortar shells continue to fall, “it’s a vocation now to stay in Syria and to be a Christian and try to be a witness of the Gospel principle of nonviolence,” said Nawras Sammour, S.J., the director of Jesuit Refugee Service Middle East and North Africa told America. The Jesuit agency is serving thousands of internally displaced Syrians in Damascus, Aleppo, Homs and other sites, Father Sammour reports. Father Sammour was visiting the United States to discuss the ongoing J.R.S. response to the crisis with Jesuit colleagues and specialists from the United Nations and nongovernmental organizations.

Speaking with America from Washington, Father Sammour welcomed news of renewed talks scheduled for late November in Geneva aimed at ending the conflict. A peaceful and united Syria at the end of such talks is “difficult to imagine now, but still possible,” he said. There is no solution to the conflict except through inclusive dialogue, Father Sammour said, urging Americans to resist the temptation of sending more weapons into the fray.

“If you try to do something as a country, support all processes of peace,” he said. He was leery of a more aggressive U.S. intervention on behalf of opposition forces. “Fighting and giving arms and weapons—it’s much easier to give people hope. Hope is not going to come from arms; there is no solution by doing war.”

Father Sammour added, “If we are going in the end to have one winner and one loser, it’s not going to solve anything.”

Outside Syria, J.R.S. is working with an already vast and still growing population of refugees in the bordering states of Lebanon, Jordan and Turkey. The number of Syrians displaced by the war is now estimated at more than 6.3 million—4.25 million struggle within Syria’s borders and 2.1 million more are refugees. More than 115,000 have been killed in the two-year-old conflict.

J.R.S. within Syria is providing monthly emergency food rations to 35,000 families, and its field kitchens serve 22,000 people each day. In Father Sammour’s hometown of Aleppo, the J.R.S. field kitchen makes up to 16,000 hot meals a day that are distributed to mosques, school-shelters and public buildings. The agency also cares for Syrians cut off from normal health care services or unable to afford medicine after months of disruption caused by the civil war. J.R.S. also offers educational and psychosocial support to nearly 10,000 children and women with a long-term eye on reconciliation in Syria.

“If there’s something that unifies all Syrians today, it’s uncertainty and fear—for everybody. Nobody has today in Syria the monopoly of suffering. All Syrians suffer. It’s not only about bad guys on one hand and on the other hand you have good guys. No, it’s not like that.”

But, he adds, “that could be a grace for us because [it is] the vocation of Christians to be with everybody and for everybody.” Staying in Syria, Father Sammour said, is “an adventure without any warranties or guarantees for the future, but that is the Gospel somehow.”