State of the Question: Women in the Church: Readers respond to America’s special issue on women (10/28) 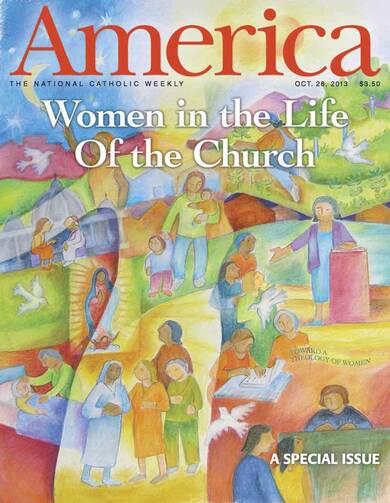 All Called to Serve

Thanks to America for including women in the discussions about the role of women in the church. Our church has to play catch-up on years and decades of neglect. Young Catholic women walk away from the official Catholic Church and use their talents and gifts to serve their families and others in need directly. They abandon faith practices in favor of working outside the walls of male-dominated thinking. This may be the future of the Catholic Church unless there are more immediate steps taken to change the status quo.

Those of us who love the church structure will stay awhile and try to change the official role of women to reflect the words more closely of St. Paul, who proclaimed that in Christ there is no longer Jew or Gentile, male or female, slave or free. My translation: To see all members—male and female, ordained and lay—participating or officiating in every function, decision and sacrament, dictated only by our discerning of who God is calling or leading to each service.

Thank you, America, for this special issue. I find it disheartening, however, that we even need to discuss the role of women in the church.

Being Catholic is a huge part of who I am. Now I have three daughters. I want them to demand the same opportunities as the boys and to expect to be part of decision-making processes. Thus, it is getting harder and harder for me to sit with them in Mass each week, where it is so obvious they will not be given equal opportunity, be part of the leadership or be invited to choose the leadership or have a part in making important decisions. I don’t want them to believe that Jesus would think this is right and just.

The fact that Pope Francis said the “door is closed” on women’s ordination is very troubling for me. It seems to indicate that very little will change during my daughters’ lifetimes, and they too will grow up in a church where women are treated as second-class citizens. This is not what I want for them.

A Theology of Men

I read with great interest, as did so many of your readers, your very fine and informative issue. Some of the writers are good friends of mine and their input helped raise my consciousness in the areas they addressed.

In light of this most interesting issue, I would like to propose a study leading to a theology of men and an issue dedicated to “Men in the Life of the Church.” While excluding clergy like myself, the issue could include articles from several college or university students, a politician, a contractor, an artist, an athlete or coach, a small business owner and even from a truck driver.

I believe it would be interesting to see whether or not the church is addressing the needs of men, especially younger men. How is the church reaching out to them and inviting laymen to contribute their talents in serving the church? Is the church encouraging men in the marketplace to penetrate their various environments with the power of the Gospel?

(Most Rev.) Peter A. Rosazza
Bloomfield, Conn.
The writer is auxiliary bishop emeritus of the Archdiocese of Hartford.

I commend the editors for their decision to devote the recent issue to matters that most concern women, and to include among the authors some of the most competent and best informed women on matters of our Catholic faith.

Clearly this issue was designed to address the failure to engage the wisdom and experience of women among contributors to the magazine in the past. I am grateful for your effort and trust that this display of their many gifts will not be limited to this impressive edition. You will concretize your commitment through such actions as hiring more women for staff positions and commissioning them to write articles more regularly.

Margaret Ormond, O.P.
Columbus, Ohio
The writer is prioress of the Dominican Sisters of Peace.

In “Of Many Things,” Kerry Weber states that this special issue on women examines some of the issues “most relevant to Catholic women today,” which “represent a wide variety of experiences and concerns of Catholic women.”

As a Catholic woman, therefore, I am disheartened that you presented an article extolling the virtues of natural family planning (“Love, Naturally,” by Regina Bambrick-Rust), yet you apparently felt comfortable omitting the perspective of the overwhelming majority of Catholic women who choose other forms of birth control for personal, economic or medical reasons.

Ms. Weber notes that “listening begins when we allow others the space to speak.” How is that goal served by giving space only to the official perspective that the magisterium approves?

Re “Opening Doors”: Kerry Robinson, Chantal Götz and company are to be applauded for using their financial leverage to gain access to what have traditionally been the power centers of the Vatican and for using their philanthropic platforms to promote the larger issues around the role of women at those levels of the institutional church.

Their unparalleled access gives them an unparalleled responsibility. Money speaks, especially in the church, and the very presence of these young women who now control their family foundations ought to alert the men in the Vatican to something we women have always known: these days it is the women in the family who most often have the greatest influence not only on the spiritual riches of which Ms. Robinson speaks but clearly on the way the temporal riches of their family are distributed.

I wish them success in their efforts, but I also hope that in the time of Pope Francis a woman will not have to be head of a foundation in order to have this level of access and conversation.

“A Promising Path,” by Kathleen Sprows Cummings, is entirely welcome. I have felt guilty, as a cradle Catholic, to have had these thoughts and feelings of rebellion at the treatment of women in the church. I don’t hear anyone else I know express these feelings or thoughts.

At 72, I have no desire to be a priest. But there must be younger women who would. I have been an altar server, a eucharistic minister and a lector—all unthinkable when I was young. There are no good reasons why we women cannot serve as priests.

All four of my daughters-in-law passed on converting because they felt the church was anti-women. I couldn’t come up with a valid enough reason to change their minds. My grandchildren are being raised Presbyterian, Episcopalian and Lutheran. Thank you for letting me know I’m not alone or sinful for feeling this way.

Though I am a loyal and thorough reader of America, I cannot yet get into the content of this issue because of the cover.

I see all the different roles. I see the superimposed female silhouette. But I am stopped by the fact that the art is…so soft and pretty. It is full of soft and rounded and care-giving forms. It is full of gentle colors and textures. It is a comforting and accommodating visual, as if for a children’s book.

Yes, I know what Jesus said about letting the children come to him. That’s different from recognizing the workers already here in the vineyard, if only we can recognize her and her companions who, by the way, are powerful and maybe even hard and challenging. And tell me again, why can’t women be ordained?

I wish that a stronger image by Ansgar Holmberg, C.S.J., could have been used. They certainly exist.

Re “At the Ambo”: Thanks for a wonderful article. If there is anything in Catholic teaching on gender complementarity and a “feminine genius,” then it would seem to follow that the church needs to hear women preaching out of their experience as women, and for women to provide a female perspective in leading the church.