A Spark of Goodness: Holiness and humanity in ‘St. Vincent’ 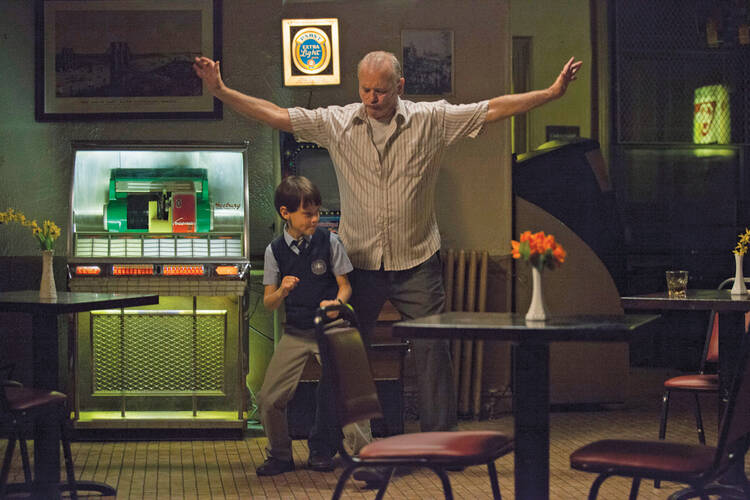 In Finnegan’s Wake, James Joyce famously described the Catholic Church as, “Here comes everybody,” a pithy tip of the cap to what the author believed was one of Catholicism’s defining traits: its inclusive, big-tent embrace of all the faithful. This metaphysical melting-pot, a mystical body we Catholics refer to as the communion of saints, includes not only those who have been canonized, but those who are works in progress. Bill Murray’s Vincent McKenna—the eponymous, hard-luck curmudgeon at the center of Theodore Melfi’s feature directorial debut, St. Vincent—is one such man.

Murray, who has made a career out of crankiness, gets to channel his inner W. C. Fields—colored with shades of Walter Matthau and Clint Eastwood’s Walt Kowalski from “Gran Torino”—as a cantankerous Vietnam War vet, about as unlikely a candidate for a halo as they come. Vincent drinks too much, smokes, gambles, curses like a sailor and frequents the sexual services of a very pregnant Russian stripper, Daka, played by Naomi Watts. He is not the sort likely to roll out the welcome mat when a single mom, Maggie (Melissa McCarthy), shows up next door with her timid 12-year-old son Oliver (Jaeden Lieberher) and a carload of emotional baggage.

Deep in debt, Vincent implausibly sells himself as a babysitter to Maggie, who works long hours as an X-ray technician. Predictably, Vincent and Oliver bond as Vincent shows the boy the ropes, including how to mix it up with schoolyard bullies and play the ponies, while dispensing sardonic advice like a misanthropic Mr. Miyagi. In return, Oliver chooses Vincent when his teacher at the parochial school he attends assigns him to write an essay about “saints among us.”

Melfi, who also wrote the screenplay and identifies as Catholic, drew inspiration from personal experience with his adopted daughter, who was given a similar assignment—she chose St. William of Rochester, a 13th-century Scotsman and the patron of adopted children.

The Catholic novelist Flannery O’Connor lamented our age’s loss of “a sharp eye for the almost imperceptible intrusion of grace” into our fallen world, but Melfi proves up to the challenge. Much like Vincent himself, the movie has a tender heart under its gruff veneer; it is a feel-good film with an edge. Sentimental without being schmaltzy, the story reflects a Catholic sensibility—an Infant of Prague statue adorns Vincent’s dresser, and the male religious all wear Roman collars (even the young hip one)—that evokes an affectionate Catholic nostalgia while acknowledging the changing times. Oliver’s classmates include a Baptist, a Buddhist, an atheist and an “I don’t know,” which his teacher, Brother Geraghty, played amiably by Chris O’Dowd, sighs is “the fastest growing religion in the world.”

Geraghty “celebrates” all religions, but says Catholicism is best because it “has the most rules and the best clothes.” It is a comment indicative, perhaps, of the overall tone, which tends toward a humanism that defines a saint as: “a human being who has dedicated their lives to others and to making the world a better place.” Rightly, other criteria include, “courage, sacrifice, compassion and humanity.” But holiness, even as an aspiration, gets only a passing mention.

It is refreshing to see McCarthy’s sensitive side, rather than her salty one, and young Lieberher impresses. But the film hinges on Murray, who should merit Oscar consideration. He plays ennui like a concert pianist, turning the simple act of navigating an empty bank teller line into artistry. Raised Catholic, Murray manages to play Vincent as unpleasant but not unsympathetic or without redeeming qualities. In a sense, he embodies Robert Louis Stevenson’s contention that “a saint is a sinner who keeps trying.” There is even a moving depiction of marital devotion under painful circumstances—though Vincent’s a la carte approach to “fidelity” saps it somewhat of its poignancy—and a nice moment with pro-life undertones.

Melfi challenges viewers to look through Oliver’s lens of charity and see Vincent’s true value, flawed though he is. In doing so, the film earnestly suggests that even the most seemingly vice-riddled soul has the potential for virtue. It was St. Augustine—someone who knew a bit about both—who said, “There is no saint without a past; no sinner without a future.”

Observant viewers may catch Vincent stealing an apple early on (a nod to Augustine’s Confessions?). But there is no tolle lege moment. Despite a health scare, Vincent seems content in his ways. But Melfi offers reasons to hope.

Opinions will differ as to whether an impressionable, emotionally vulnerable young boy’s introduction to booze, gambling and women is appropriate fodder for comedy, and whether Maggie should let Oliver hang around with an ornery drunk who frequents bars and strip joints. (To his credit, Melfi reins in the bawdiness.)

But questions of parental judgment aside, it is hard to find fault with the movie’s compassionate refreshingly non-cynical message as summed up by Oliver: “To give everything and have nothing left to give is the best life you can have.” And its central relationship resonates with Pope Francis’ theology of encounter. Every time we “encounter another person in love,” Francis says, “we learn something new about God.”

Viewing the film invites us to consider Pope Paul VI’s words, that whenever art revels “in the human condition, however lowly or sad it may be, a spark of goodness, at that very instant, a glow of beauty pervades the whole work.” Ultimately, Melfi succeeds in saying something honest about woundedness and the mysterious workings of grace on broken vessels of clay, “guilty of dust and sin,” as George Herbert poetically reminds us, all in need of Pope Francis’ “field hospital” church and the healing it provides.

“Dumbness does not play well in Heaven,” Brother Geraghty quips. After a summer movie season dominated by dumbness, it is nice to see a film that offers something more satisfying. Imperfect? Yes. But then, we are all works in progress.

David DiCerto is a Catholic film critic and co-host of “Reel Faith.” His movie reviews can be seen at www.netny.tv/reelfaith.