A Space for Women: There are leadership roles in the church that do not require ordination. 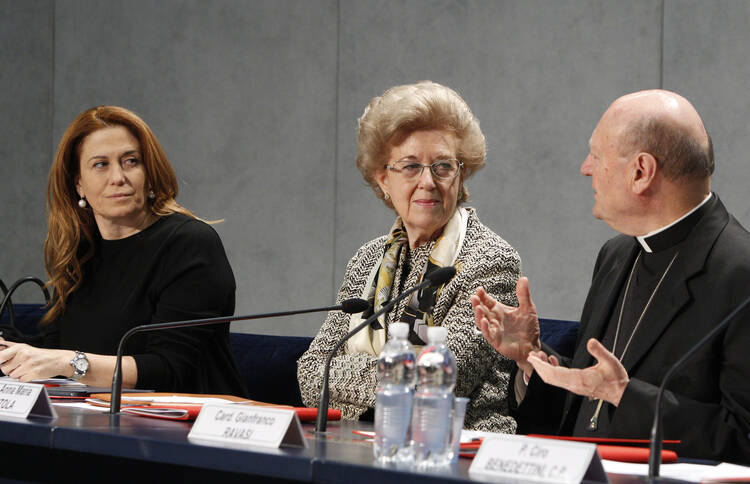 Catholic women from around the world recently shared their stories of faith and service during an observance of International Women’s Day at the Vatican. The event, called Voices of Faith, took place on March 8, during Women’s History Month, and was notable for its open dialogue about the status of women in the church today. It is also an important and necessary initiative in light of recent statistics from the Center for Applied Research in the Apostolate that suggest that women, who traditionally have reported being spiritual in higher numbers than men, are increasingly moving away not only from formal association with religion but from spirituality in general.

For some women, a lack of interest in the church results, in part, from the feeling that their voices are not heard or represented within the visible structures of the church. For example, while women serve the church in myriad ways, there remains a lack of leadership roles for women at the Vatican. Women do valuable day-to-day work needed to keep the Vatican running, but few are in positions of power or authority. Only two women serve as under secretaries, the highest ranking position to which women have been appointed in the Curia. In 2014, the total number of women employed by the Vatican was 371, up from 194 a decade earlier, according to Gudrun Sailer, a journalist at Vatican Radio. She is among the 41 percent of women working at the Vatican who have university degrees and work in professional positions like archivists and department heads. This is certainly a welcome trend.

Catholic women who succeed in other parts of their lives often see no outlet for their leadership skills within church structures. This can result in women choosing to devote their energy elsewhere. When this occurs, the church loses the perspectives and strengths of these women. Yet during the Voices of Faith meeting, Sailer pointed out that greater opportunities for women in the church does not mean simply replicating secular structures. “It’s about recognizing, realizing that excluding women from the church [does] not conform to the Gospel,” she said.

This sentiment was echoed during the Pontifical Council for Culture’s assembly on women, whose working paper urged the engagement of women “in full collaboration and integration with the male component.” This full collaboration is crucial if the church hopes to continue to attract and keep women active in the faith. Pope Francis, consistent with the centuries-long teaching of the church, has stated that “the reservation of the priesthood to males, as a sign of Christ the spouse who gives himself in the Eucharist, is not a question open to discussion.” It remains the case, however, that there are many leadership roles in the church that either do not or should not require priestly ordination. Accordingly, our church must create a more inviting, empathetic space that recognizes the contributions that women have made and continue to make to the church and society. Some of those efforts might include:

Attention to language. What we say and how we say it matter. Inclusive language in church documents and in liturgies is a small but welcoming gesture. The church could also choose more readings about women for the Lectionary. In addition, providing greater opportunities for lay people to preach would provide a greater variety of perspectives on the word and a wider look into the ways in which we experience God.

Lift up the work already being done. Pope Francis has voiced support for women in theology. And while the new theology of women encouraged by Francis certainly can be developed further, the church cannot ignore the rich theology that already exists.

Provide guidance and opportunity. We must explicitly tell young women that they matter, that they have a voice and that their voices will be heard. And then we must act. We must help young women to envision how their gifts and talents might be expressed in leadership roles in the church and connect them with mentors who can guide these efforts. More roles for women in Roman and diocesan curias would be a good start.

Think globally. The church must work for the inclusion of women not only within church structures but within our larger society as well. We must also recognize that the challenges facing Catholic women in developed nations can be very different from those in less developed nations. A report produced by No Ceilings, an effort by the Clinton Foundation to advance the status of women around the world, recently highlighted the fact that in many countries women still lack the right to vote and face forced marriages, a lack of education and unsafe conditions for preparing food.

Meet people where they are. The church at every level must be willing to listen to the frustrations of all who feel alienated and be willing to accompany them in their spiritual journey. Open channels of discussion and greater inclusion of all people mean more room for dialogue and for the experience of true encounter that so many people—men and women alike—seek today.